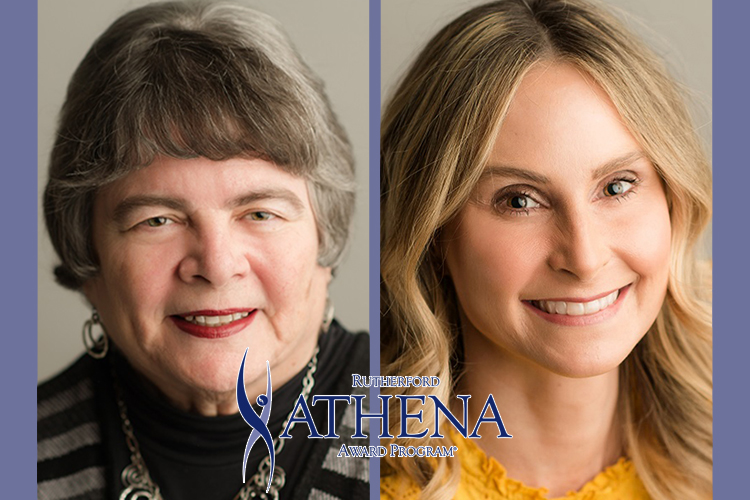 A pair of respected MTSU alumnae have been recognized with ATHENA Awards, one of Rutherford County’s highest honors, for their leadership, professionalism and community service.

Dr. Linda Gilbert, director of Murfreesboro City Schools and a former professor in and three-time graduate of MTSU’s College of Education, received the 2019 ATHENA Leadership Award and Erin Rains, a family nurse practitioner at Saint Thomas Medical Partners and graduate of the School of Nursing and University College, received the Young Professional Leadership Award from the Rutherford Cable women’s professional development organization April 12.

Gilbert, the current Tennessee Superintendent of the Year, earned her Bachelor of Science degree in music and elementary education, her Master of Arts in Teaching in music and her education specialist degree in administration and supervision from MTSU. She also earned a doctorate of education in curriculum and instruction from Tennessee State University.

Gilbert has served as the director of schools in Murfreesboro since 2010 and received the MTSU Alumni Association’s 2014 True Blue Citation of Distinction for her achievements in education during its annual Distinguished Alumni Awards.

Under Gilbert’s leadership, the Murfreesboro City Schools system has seen drastic improvements, going from School Improvement II status to a statewide Exemplary ACCESS School District and implementing programs to improve student nutrition both in and out of school.

She’s also worked throughout her career to create an environment for positive change by helping establish Read To Succeed, Saint Thomas Health’s Ministry in Motion, Prevention Coalition for Success Rutherford County and Rutherford County’s Books from Birth. Gilbert has written and received more than $16 million in grants for schools and community organizations.

“In any life or organization, each new experience, new responsibility, new proficiency we encounter creates change,” Gilbert said. “And while change is inevitable, growth is not. In fact, positive change that moves us forward will only occur in an environment authentic enough to encourage change.”

Rains, a native of Murfreesboro, worked for 14 years as a travel nurse and in critical care nursing before earning her advanced degree as a family nurse practitioner.

She’s also offered her knowledge to a variety of professional organizations and to her workplaces, as well as the community, through volunteering, most significantly with Murfreesboro’s Domestic Violence and Sexual Assault Center.

As a member of the center’s board and as a domestic violence survivor, Rains saw a way to help victims by providing a safe, private, more comfortable place to perform sexual assault examinations by relocating to a new site.

“My voluntary work with the Domestic Violence and Sexual Assault Center reflects my struggles and triumphs in my personal life,” she said. “I’m a victim, a survivor, and now an advocate speaking out against domestic violence and sexual assault.”

Rains has also helped to create and expand the center’s annual fundraisers, organizing the new Boots & Brews event in 2017 and doubling its attendance in 2018 and revamping the annual Tip Your Waiter luncheon to boost donations.

Rutherford Cable, which is a chapter of the 40-year-old Nashville Cable, is a decade old and now has more than 250 members. It provides professional and personal development as well as business growth through building long-term relationships, structured networking and referrals. For more information, visit www.rutherfordcable.org.