Department of Recording Industry honored alumni Chandler Baldwin, Jared Hampton and Eric Steedly, members of the country group Lanco, for their outstanding accomplishments and excellence in artistic expression on Wednesday, April 17, at BMI in Nashville. 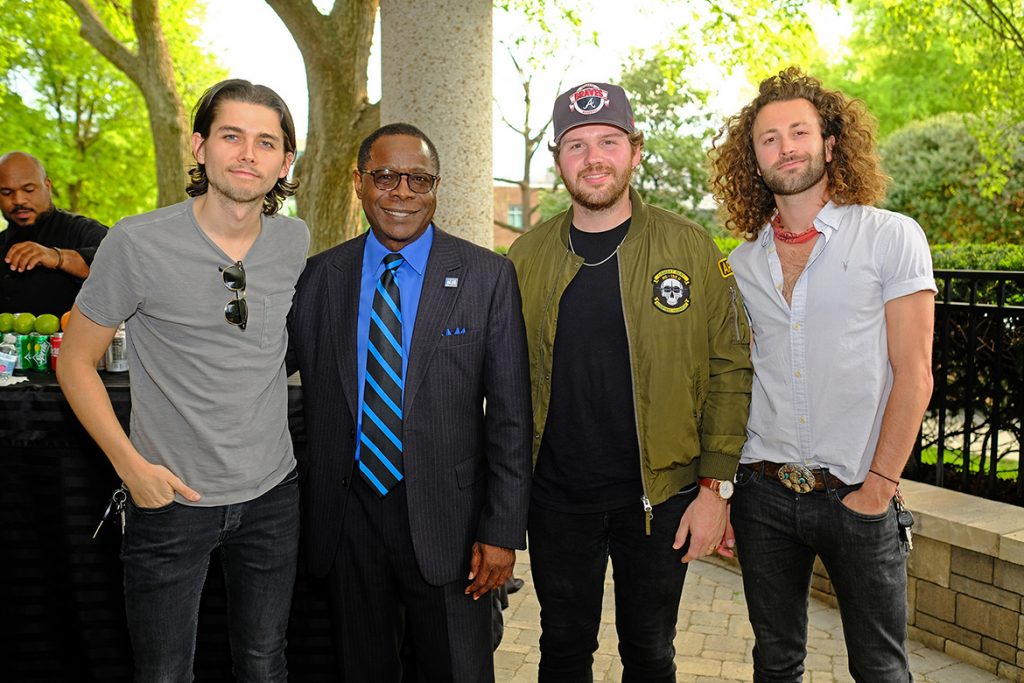 “I can honestly say I can attribute a lot of what has happened to me and us to being at MTSU. I am forever thankful for that,” Steedly told the crowd.

Added Hampton, “We call it (MTSU) ‘the incubator.’ It is where everyone grows, meets and can network. That is what MTSU was for us, so I am forever thankful.”

The three met while in college and joined Lanco, stylized commercially as LANCO and short for “Lancaster and Company,” with Brandon Lancaster and Tripp Howell in 2015. They signed a deal with Arista Nashville and released their debut album, “Hallelujah Nights,” last year.

Lanco’s double-platinum No. 1 double hit, “Greatest Love Story,” was included in the Netflix show “The Ranch” and ABC’s “The Bachelor.” They have toured with Luke Combs, Dierks Bentley, and Brothers Osborne and will launch a United Kingdom tour May 1.

In late March, the group received an unexpected call from Carrie Underwood, who told them they’d won the Academy of Country Music’s 2019 New Group or Duo of the Year Award.

“This is extra special to MTSU because Pete Fisher, who is the CEO of the Academy of Country Music, is also one of our graduates. So we have an outstanding alum honoring other outstanding alums,” said Beverly Keel, chair of the Department of Recording Industry.

Baldwin added that he is “really thankful for the audio production program at MTSU. I was able to be close to Nashville and get a degree that I enjoyed getting and also learned a lot.

“It was great to learn practical ways to advance in the music industry that we have legitimately used,” he continued. “When we are having some band discussions or meetings, we will bring up some things we have learned, like, ‘We should do it this way.’ I am thankful to MTSU for giving me that foundation.”

“They recently released the single ‘Rival,’ which is the first song from their upcoming second album,” she said. “The song is about grit and dedication, which captures the spirit of so many of our students, who are scrappy, hard-working and driven by their passion for music. The song’s message is ‘No matter who you are and where you are from, be proud of that. Be yourself and take pride in creating your own path.’

“Like Chandler, Jared and Eric, our students aren’t going to let anything stop them from pursuing their dreams of having a career in music. They are changing lives with their music, inspiring our student, and serving as great role models and ambassadors for MTSU.”

MTSU’s Department of Recording Industry is part of the College of Media and Entertainment.