And it doesn’t hurt that the Clarksville High School junior not only is interested in MTSU’s film production and marketing programs, but she personally spent time on the Murfreesboro campus when the Clarksville Business Academy visited MTSU’s film and College of Media and Entertainment facilities.

MTSU President Sidney A. McPhee talked to those attending the True Blue Tour event Thursday, Oct. 10, in Clarksville, Tenn., at the TownePlace Suites by Marriott before he presented a special blanket to a parent of a prospective student. (MTSU photo by Randy Weiler) 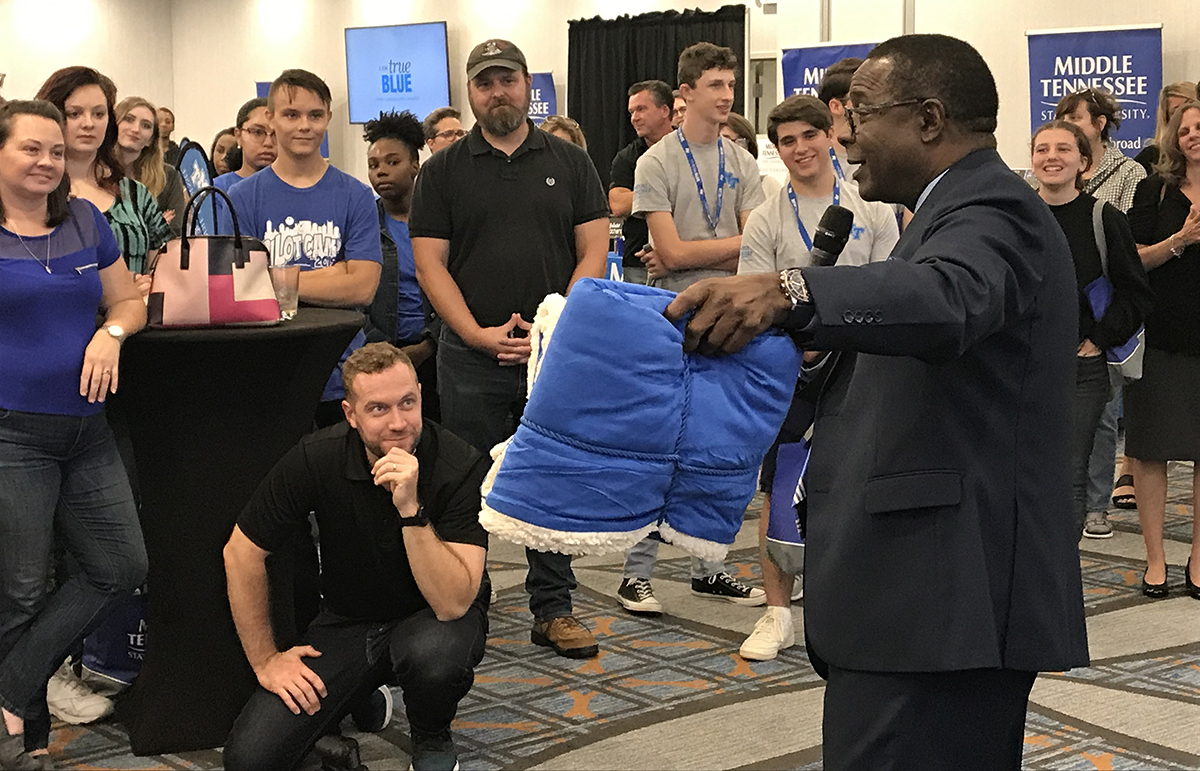 MTSU President Sidney A. McPhee talked to those attending the True Blue Tour event Thursday, Oct. 10, in Clarksville, Tenn., at the TownePlace Suites by Marriott before he presented a special blanket to a parent of a prospective student. (MTSU photo by Randy Weiler)

Clarksville and Franklin were the sixth and seventh stops, respectively, as MTSU travels across the state and to Alabama, Georgia and Kentucky in search of outstanding prospective students. The events are free. To register for an upcoming tour event, visitwww.mtsu.edu/rsvp.

“There’s a lot of education in the family,” said Donna Pittman, Annabeth’s mother.

On Annabeth Pittman’s visit, she recalled “all the creativity faculty let students have.” She also attended an MTSU football game in Floyd Stadium.

At both Franklin and Clarksville, MTSU President Sidney A. McPhee shared about outstanding programs, caring faculty and staff, and the guaranteed True Blue, Presidential and Trustee scholarships available to qualifying students who apply by the Dec. 1 deadline. 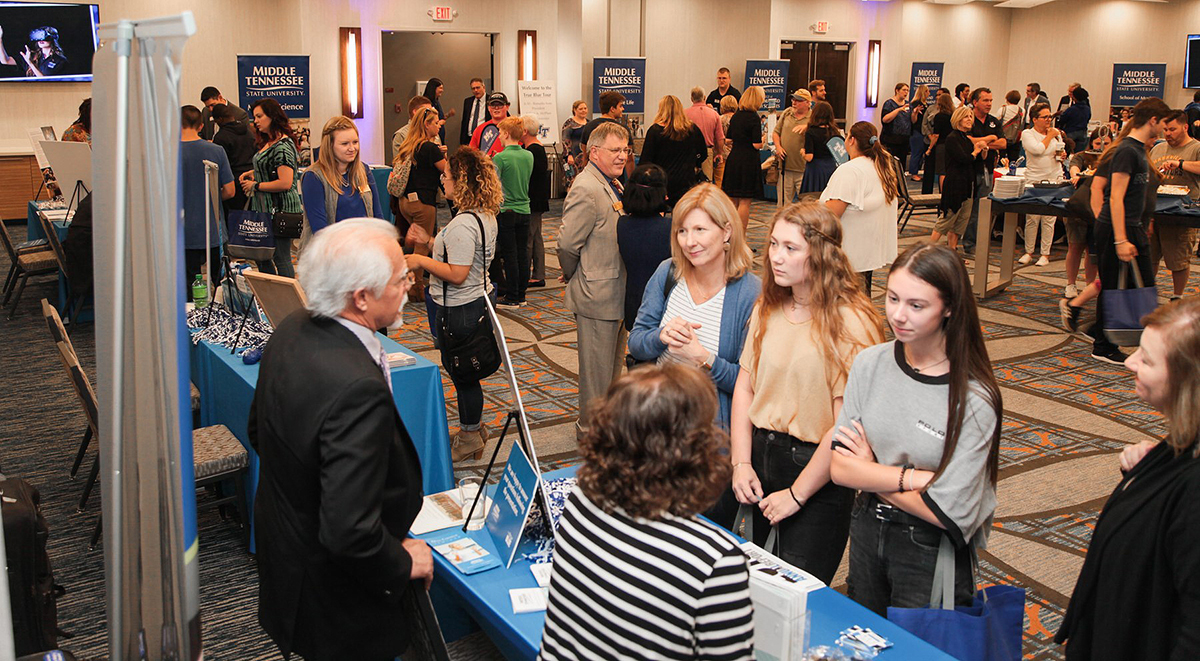 Prospective students and their families from the Clarksville, Tenn., area visited with MTSU colleges and departments Thursday, Oct. 10, at the TownePlace Suites by Marriott during the True Blue Tour recruiting visit. (MTSU photo by John Goodwin)

• Fellah Mohsun, 17, a Clarksville High senior qualifies for the new True Blue Scholarship with a 4.0 GPA and 23 ACT, but she’s hoping to improve the ACT when she retakes it. “That would help,” Mohsun said of the additional $8,000 ($2,000 per year for four years. “Hopefully, I might get a Presidential (Scholarship).” This scholarship is $18,000 total or $4,500 per year. She is considering pursuing engineering, and attended the tour event with her mother, Oneeba Mohsun and brother, Rayan Mohsun.

• Lisa Elaine Wrede definitely came the farthest distance. The foreign exchange student from Muenster, Germany, is a junior this year at Rossview High, where she’s on the varsity tennis team. She’s “very impressed” with MTSU, saying she wants to study international relations or political science and play tennis.

• MTSU alumnus and Legends Bank President and CEO Tommy Bates Jr. spoke to the Clarksville audience, admitting a “blue” persuasion toward his alma mater (Classes of 1985 and ’92) and that of wife Debbie (’86) and their son Kyle (’15), an MTSU electronic media production major who is on the road with the likes of Shawn Mendes, The Chainsmokers, Little Big Town and others.

• Savannah Williams of Murfreesboro said she plans to transfer to MTSU from Austin Peay State University, where she is a sophomore public relations and advertising major. After earning an MTSU Phillips Bookstore gift, Williams received a $1,000 scholarship from McPhee. 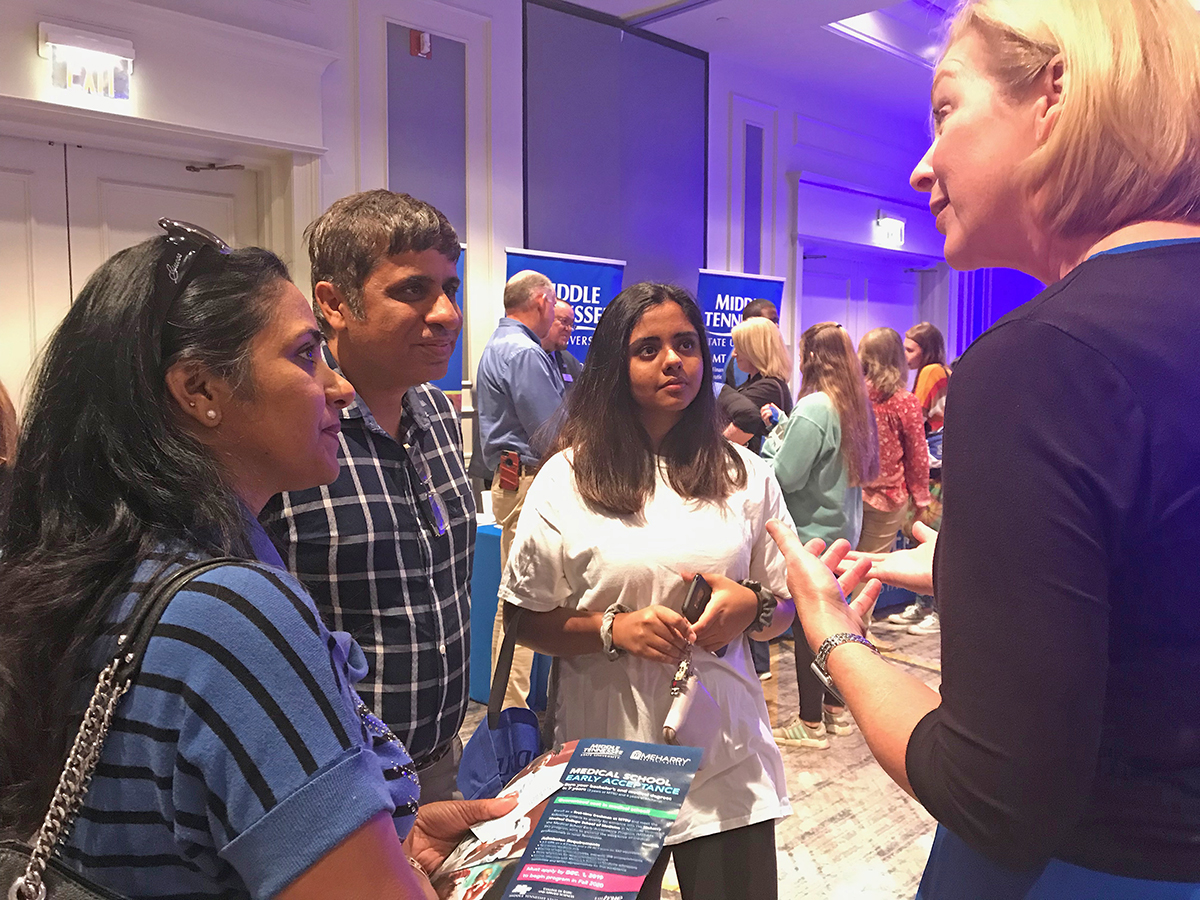 Ritu, left, Lalit and Aarushi Khanna listen and Linda Olsen, director of undergraduate recruitment at MTSU, discusses MTSU options they can consider at the Murfreesboro university during the Tuesday, Oct. 8, True Blue Tour at the Franklin Marriott Cool Springs. AArushi Khanna has applied and been accepted. (MTSU photo by Randy Weiler)

• Independence High senior Lauren Caldwell, 17, plans to apply for an MTSU Honors College Buchanan Fellowship — the top scholarship award any student can obtain — with a 32 ACT and weighted 4.4 GPA. “MTSU’s my top school,” she said

• Aarushi Khannz, 17, a senior at Ravenwood High in Brentwood, Tennessee, qualifies for a Presidential Scholarship with a 3.8 GPA and 29 ACT. Visiting with parents Ritu and Lalit Khanna, the prospective student has “visited MTSU twice, applied and received my acceptance letter last week.” They expressed an interest in the MTSU-Meharry Medical School Early Acceptance Program.

• Counselor and goody bag recipient Cassie Smith of Independence High School in Thompson’s Station received a $1,000 scholarship to share with her students after McPhee learned of how she shared previous scholarship awards with a student and former student.

Up next for the MTSU True Blue Tour staff and administrators will a visit to Kentucky. Louisville will be the next tour stop for a 12:30 p.m. luncheon and 6 p.m. student reception, both on Wednesday, Oct. 16, at the Louisville Marriott East, 1903 Embassy Square Blvd. To register, visit www.mtsu.edu/rsvp. Walk-ups are welcome. 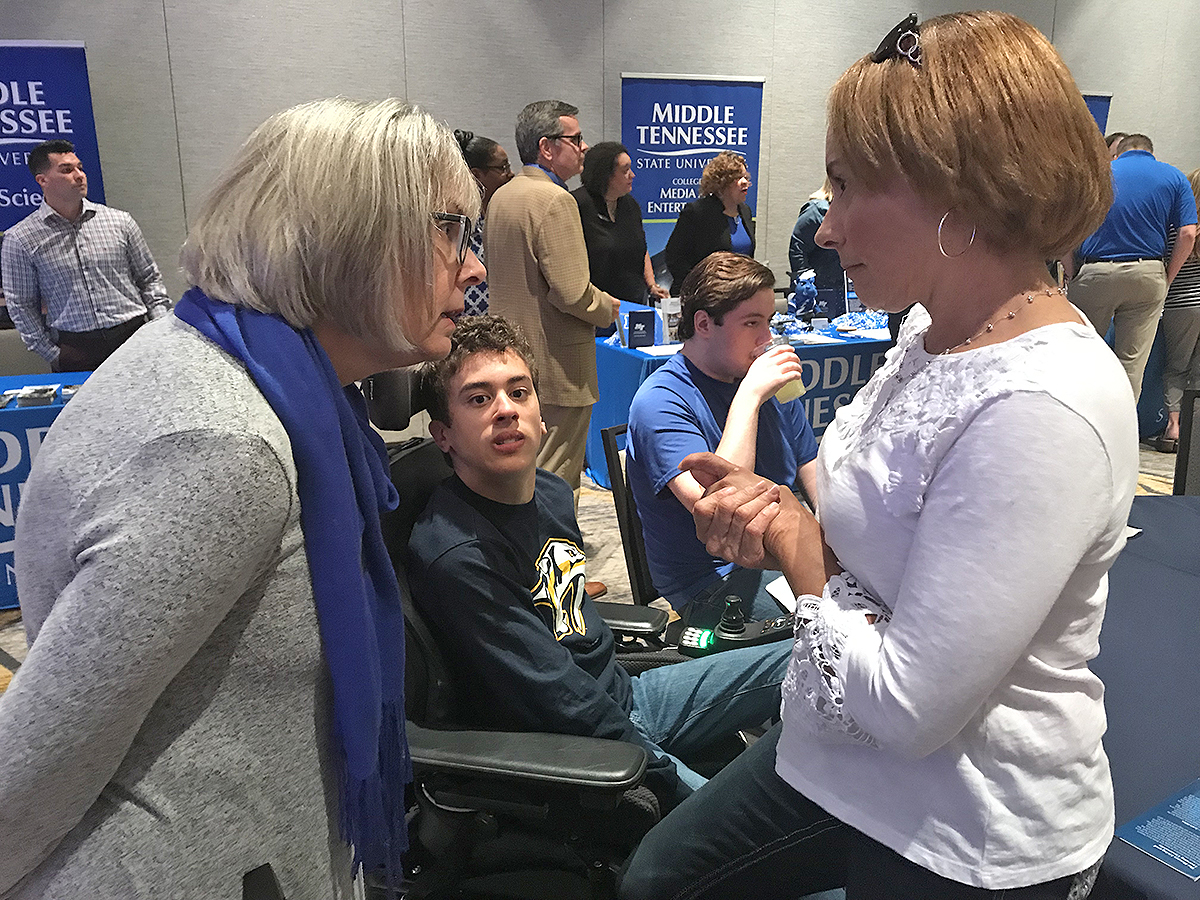