The heart-wrenching, winding and ongoing journey of U.S. Marine veteran and Purple Heart recipient Adam Sorensen and then-wife Victoria, laid out in an 82-minute film, framed the conversation Thursday night, Oct. 10, at Regal Hollywood 27 in Nashville after the documentary “Homemade” was screened as part of the Nashville Film Festival. 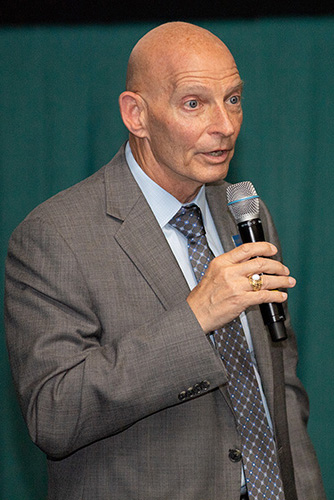 Middle Tennessee State University, a sponsor of this year’s festival, coordinated a frank and at times emotional panel discussion about the film and veterans’ issues moderated by retired U.S. Army Lt. Gen. Keith Huber, the university’s senior adviser for veterans and leadership initiatives who served 38 years in the military, including 14 as a general officer.

A vocal advocate of helping veterans reintegrate into society, Huber applauded the filmmakers on “an incredibly accurate documentary film” that he said unflinchingly highlighted the challenges that combat veterans can face after multiple deployments, including serious physical and mental injuries and a resulting disconnect from civilian life that can be extremely difficult to bridge.

“This was very emotional,” said Vedral-Baron, a retired U.S. Navy captain, choking up as she spoke. “I see it every day. …

“Those who successfully work through this and get to the other side, they do it with their (military) brothers and sisters, which is why the VA has embraced that, we get that now. Our successful programs have groups that work together and support each other that continue. That is why I do this.” 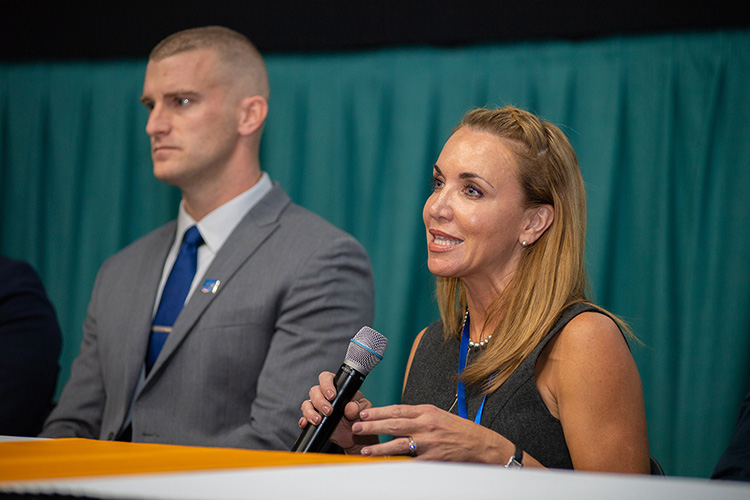 Dr. Hilary Miller, right, director of MTSU’s Charlie and Hazel Daniels Veterans and Military Family Center, participates in a panel discussion Thursday, Oct. 10, at Regal Hollywood 27 after the screening of “Homemade,” a documentary about the post-deployment struggles of a military veteran shown at the Nashville Film Festival. At left is MTSU doctoral candidate and Marine veteran Corbitt Huseth. (MTSU photo by James Cessna)

“Homemade” covers a six-year journey with Sorensen, a decorated Force Reconnaissance Marine, as he navigates civilian life and the effects of post-traumatic stress disorder, traumatic brain injury, and addiction on his marriage, family and work.

Starting with the 2010 IED explosion that seriously injured Sorensen and his unit during a reconnaissance mission in Afghanistan, the film chronicles his descent from high-achieving, up-and-coming officer to troubled combat veteran, addicted to booze and pills and trying to heal from the emotional shrapnel of multiple deployments in a war zone.

“Homemade was originally developed from the idea that the improvised explosive device goes off twice: once in the field, affecting each individual differently depending on a variety of factors including proximity to the blast, physical position and past injuries,” according to the film’s website, homemadethefilm.com.

“There is a second blast that goes off in each family living room as a result of the actual explosion. Its footprint reaches our closest loved ones, the physicians treating the wounded, and extends into our communities.”

With day-to-day footage at home, “Homemade” gives an intimate and often painful look at Sorensen’s post-deployment life as he battles prescription drug and alcohol dependency, short-term memory loss and depression, all while a storybook marriage, his parents’ trust, and a promising career as a military officer start to crumble right before the viewer’s eyes.

Now bearded, buff and clearly in a different place from the many low points during those six years — including thoughts of suicide — a remarried Sorensen told the Nashville audience that his journey continues as he embraces practices such as physical fitness, outdoor recreation, yoga and meditation.

“In the end it comes down to personal practice,” Sorensen said. “There’s not really going to be a kind of one-stop shop to make everything right for every veteran, and that’s what we want to do to make it work.

“But the reality is everyone has an individual story, an individual amount of trauma, and that’s going to be a challenge with what the military does.” 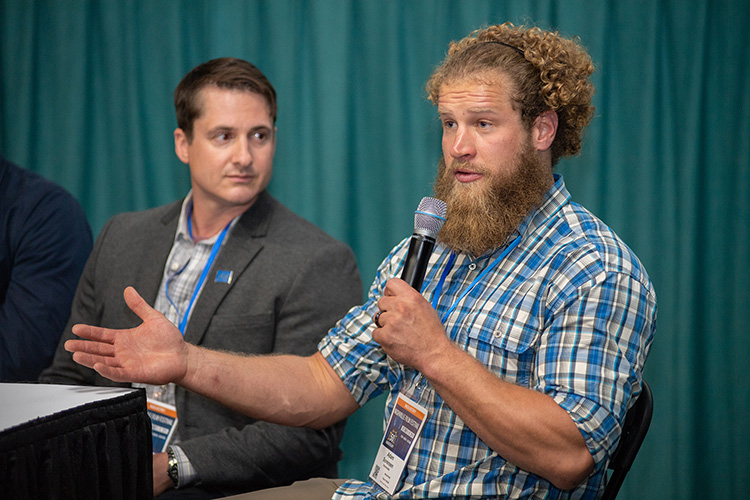 U.S. Marine veteran and Purple Heart recipient Adam Sorensen, right, answers a question as part of a panel discussion Thursday, Oct. 10, at Regal Hollywood 27 after the screening of “Homemade,” a documentary about Sorensen’s post-deployment struggles shown at the Nashville Film Festival. At left is Silver Star combat veteran and MTSU alumnus Jay Strobino, one of the seven panelists. (MTSU photo by James Cessna)

MTSU does its part to support student veterans and their families through the Daniels Center, named for country music legend and patron Charlie Daniels and his wife, Hazel. It’s the largest and most comprehensive veterans center on any Tennessee higher education campus and serves as a one-stop shop to meet a variety of academic needs for the university’s 1,000-plus population of student veterans and family members.

“I just think it’s important to take every opportunity to learn what some of their paths might be like,” said Miller, the Daniels Center director. “To watch the film and have this sort of dialogue … not everybody’s experience is like this, but I certainly want to make sure that I know as much as I can so I can assist.” 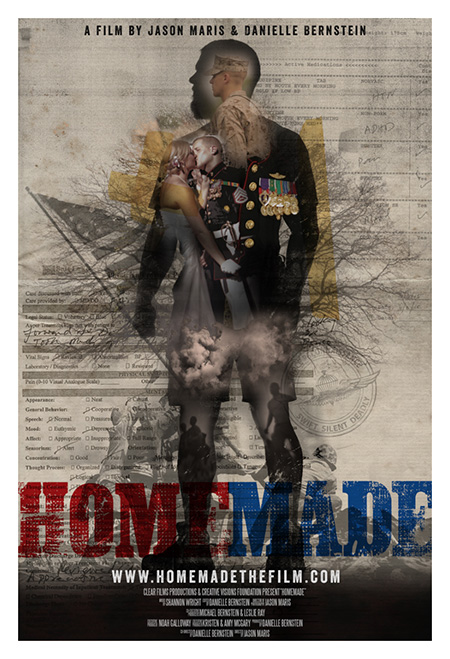 Strobino, who graduated from MTSU in December 2018 with the help of the Daniels Center, was wounded 13 times in 2006 during one-on-one combat with an enemy soldier while serving as an Army sergeant in Iraq.

He shared how he “disassociated myself from all things military” once he left the Army, a move that led to isolation and personal struggles before he reconnected with fellow soldiers who shared their own struggles and formed a reliable support group.

Strobino said he served in Iraq with the documentary’s executive producer, Noah Galloway, a member of the 502nd Infantry of the 101st Airborne Division at Fort Campbell, Kentucky.

Strobino said Galloway was injured about a month and a half before he was, and his story of battling personal demons after the military was similar to Sorensen’s.

“Right before this meeting, Adam told me, ‘If this could help anyone, why wouldn’t I share that?” Strobino said. “And that’s the same thing that Noah and I shared. Our story, in and of itself, is just a story and we could keep it to ourselves and it doesn’t do anything. But if we can share it, which I love sharing it, and it could change someone’s life, why wouldn’t we do that?”

Huseth, whose doctoral research in the College of Behavioral and Health Sciences looks at the relationship of sleep and physical activity to traumatic brain injury and PTSD, recalled how when he came to MTSU as an undergraduate, he worked with the underwater treadmill therapy program for clients with spinal injuries.

He met a Vietnam veteran undergoing the therapy who became a mentor of sorts and guided him toward pursuing research, something Huseth hadn’t initially considered.

“He took his life last year … and that has spurred me on to pursue the research avenue,” Huseth said of his friend, adding that the veterans’ issues highlighted in “Homemade” relates closely to his thesis.

“This is a pretty powerful film and just adds more fuel to the fire of why I want to continue this research.”

At a basic level, he said, civilians can help veterans reintegrate with a simple step: “Truthfully, I think all they want is a conversation, is engagement,” he said. 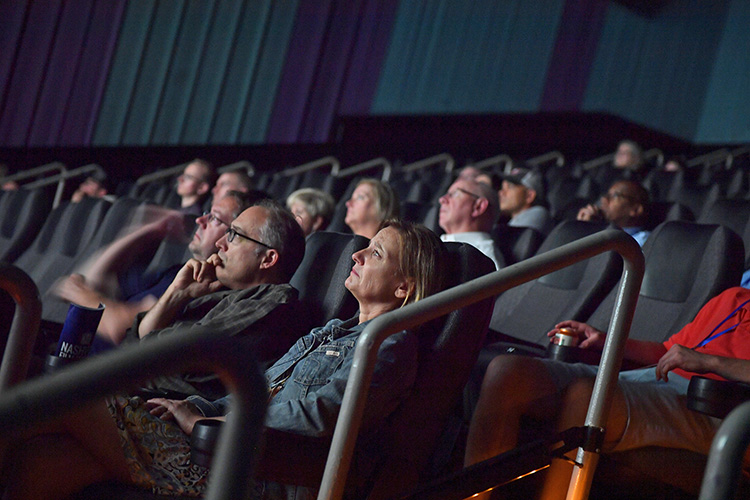 Audience members watch the documentary “Homemade” at a screening of the film Thursday, Oct. 10, at Regal Hollywood 27 as part of the Nashville Film Festival. MTSU is a festival sponsor. (MTSU photo by James Cessna)

Maris, who’s worked with the Marine Corps for more than 20 years as a photographer and filmmaker, said that he feels a missing component of helping veterans reintegrate into society is addressing the need to modify the behaviors they’ve developed to become successful soldiers — boot camp, officer training, etc. — that don’t necessarily work in the less structured environment of the real world.

“That is something that is really relevant to this topic, and what happens specifically when people return from a war environment. And not just war, but a chain of command and a job they’ve been conditioned to do,” he said. “There are things that they (now) know they can do on the back end … but it’s a complicated policy endeavor.”

Huber noted that Huseth’s unit in Afghanistan suffered 16 combat deaths and 200 wounded during the war. Since coming home from the war, the unit has suffered 36 suicides. Much work remains to bolster the survivors, he said, from health care to research to general support services.

“The really important question is now that you know this, what do you do with it?” Huber asked the audience.

Co-director Bernstein said they plan to show the documentary at other film festivals while doing “a limited theatrical release” in November as well as community screenings. Discussions are also ongoing about a possible nationwide tour with Sorensen and screenings within the Marine Corps. Huber said he hopes to screen the documentary on the MTSU campus too.

For more information about “Homemade,” go to www.homemadethefilm.com. 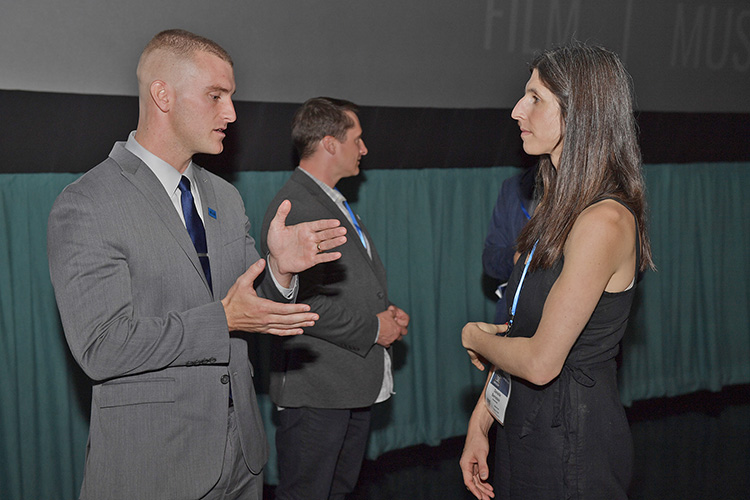 MTSU doctoral candidate and Marine veteran Corbitt Huseth, left, chats with Danielle Bernstein, producer, editor and co-director of the documentary “Homemade” after a screening of the film Thursday, Oct. 10, at Regal Hollywood 27 as part of the Nashville Film Festival. MTSU is a festival sponsor. (MTSU photo by James Cessna)