More than 10 years ago, Judith Iriarte-Gross had a vision and dream to provide something that would be a lasting hallmark for women in STEM at MTSU in the areas of science, technology, engineering and math.

Iriarte-Gross always has been a dreamer. In 1997, more than 20 years after “Expanding Your Horizons in Math and Science,” or EYH, started on the West Coast, she implemented the MTSU EYH version on campus.

It just celebrated its 23rd anniversary. 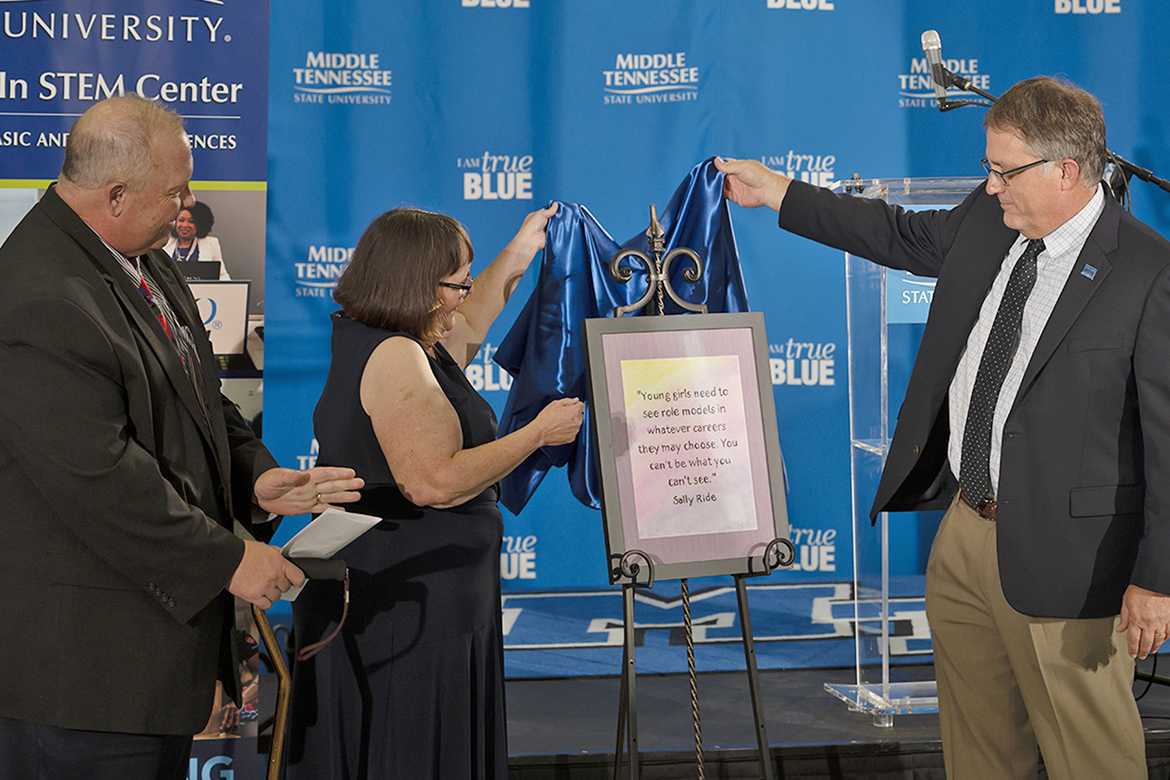 A decade later, she approached then-Provost Kaylene Gebert, an EYH board member and longtime supporter, about an idea that would be a hub for women. Eventually, it would be called the MTSU WISTEM Center. Though housed in a small, confined office space in the Midgett Building, located behind Kirksey Old Main, it was the start of what has become a vibrant group on campus.

The university celebrated the 10th anniversary of the WISTEM Center Wednesday, Oct. 9, in the Strobel Lobby, which connects the Wiser-Patten Science Hall with the Davis Science Building.

The center, now located in Davis Science Building Room 115 in the middle of MTSU’s Science Corridor of Innovation, is open to all who support women in STEM on campus, in the community and across Tennessee.

The center’s mission is to enable the campus and community to realize the intellectual potential and utilize the expertise of women in the STEM disciplines.

“The center has grown more and more each year,” said Iriarte-Gross, the university’s 2018 Career Achievement Award recipient. “We offer new programming — DigiGirlz (with Nissan and Microsoft) and the National Science Foundation’s ADVANCE, which supports the participation and advancement of women in academic STEM careers at MTSU.

“We have wonderful programs and wonderful people,” she added. “I love to see girls get excited about STEM.” 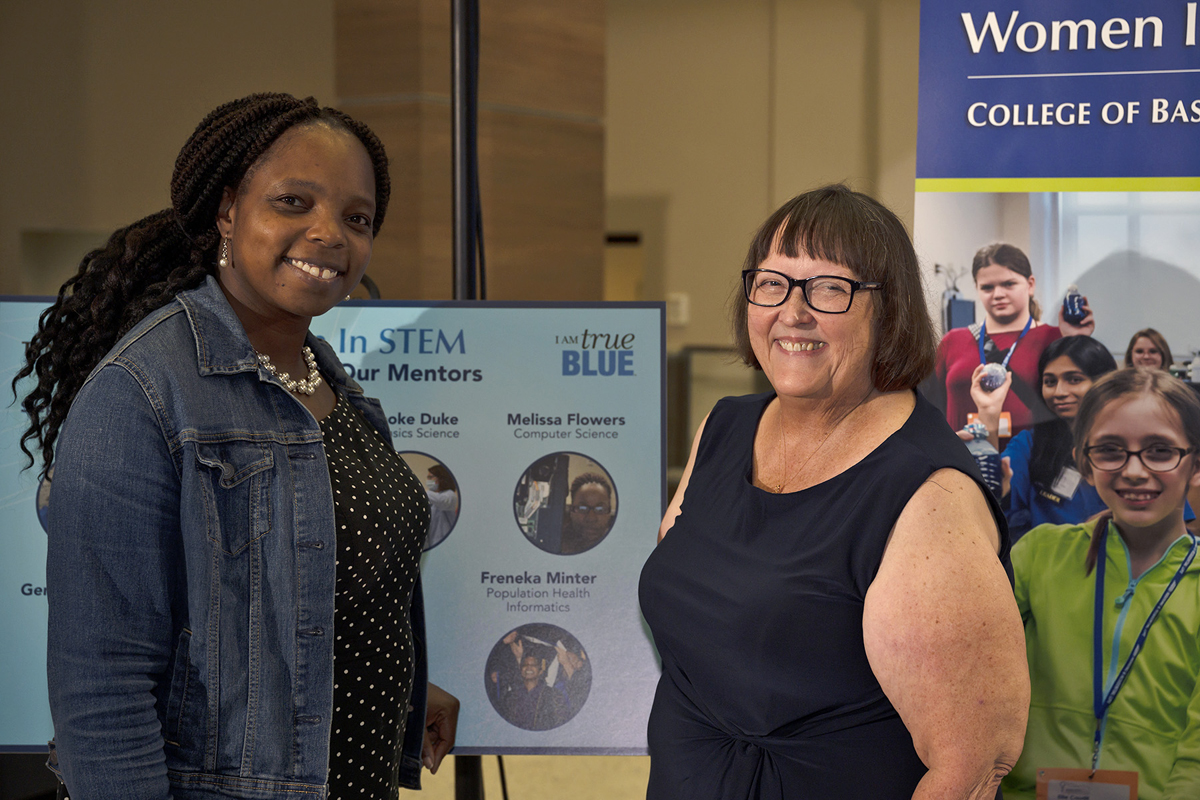 The MTSU EYH program is growing across the state and the South. Iriarte-Gross said she is constantly contacted about starting new EYH conferences in Tennessee and other states.

A National Science Foundation grant reviewer wrote in 2007 that “MTSU is serious about girls and women in STEM.” Iriarte-Gross and others firmly agree.

“The WISTEM Center is raising the bar for STEM education — not just in the classroom, but also in the laboratory and in the workforce,” Provost Mark Byrnes said during the anniversary celebration.

“To all of you who have helped bring us to this 10-year mark, I salute you,” Byrnes added. “Your devotion to creating opportunities for young women from all socioeconomic backgrounds and helping them to envision their future in the workforce and in mentoring the next generations strengthens our society immeasurably and contributes significantly in making MTSU a national and global leader in this vital work.”

Byrnes called College of Basic and Applied Sciences Dean Bud Fischer to the stage to accept a plaque and special painting created to commemorate the center’s work for the past decade.

Event lead planner and Department of Aerospace alumna Lisa Reaney commissioned a painting, created by artist Chrissie Richmond, of an inspiring quote by astronaut Sally Ride: “Young girls need to see role models in whatever careers they may choose. You can’t be what you can’t see.”

Reaney donated the work of art to the WISTEM Center to display and encourage young women to study STEM and help other women realize their dreams of a career in STEM. 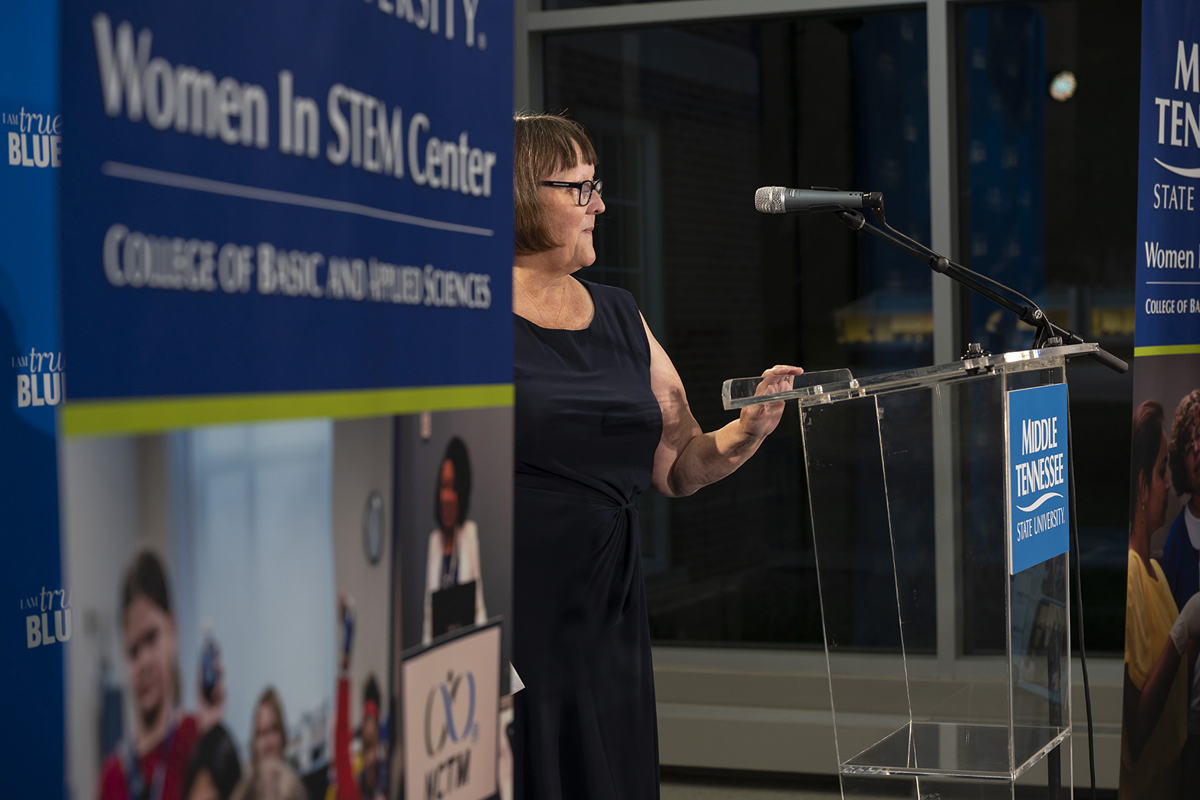 Virginia Mayfield of the Tennessee Department of Education touched on access, equity and opportunity in her keynote talk.

“With access, what I mean is students having access to an understanding of what STEM really is,” said Mayfield, a Cookeville, Tennessee, resident and director of mathematics, science and fine arts for the education department.

“There’s a lot of research that shows when you take a group of students and show them the names of STEM things that they can do, they’re not turned on. … But when you show them pictures of what that field looks like and what somebody engaging with that work looks like, they’re much more passionate and excited about it: ‘Yes, that is something I want to do.’

“As far as equity,” Mayfield continued, “it’s not just a man’s world in the STEM fields. Women are just as capable and need to be in those fields and bring very unique perspectives to the STEM work. Everybody belongs at the table.”

Mayfield uses grade levels — a college sophomore chemistry major, a high school senior attending the Governor’s School for the Arts, a high school sophomore computer whiz and an eighth-grader who wants to be a physician — to share STEM opportunities that young people might encounter.

“It’s about making sure they have the support and opportunity to be successful,” Mayfield said. “One of the things this (WISTEM) group does a really good job at is mentoring not only high school kids but college kids and helping them have the supports in place so they can be successful.”

Mary Hoffschwelle, MTSU’s associate provost for strategic planning and partnerships, spoke during the celebration of the collaborative relationship MTSU and WISTEM share.

The Department of Chemistry is one of 11 in MTSU’s College of Basic and Applied Sciences.