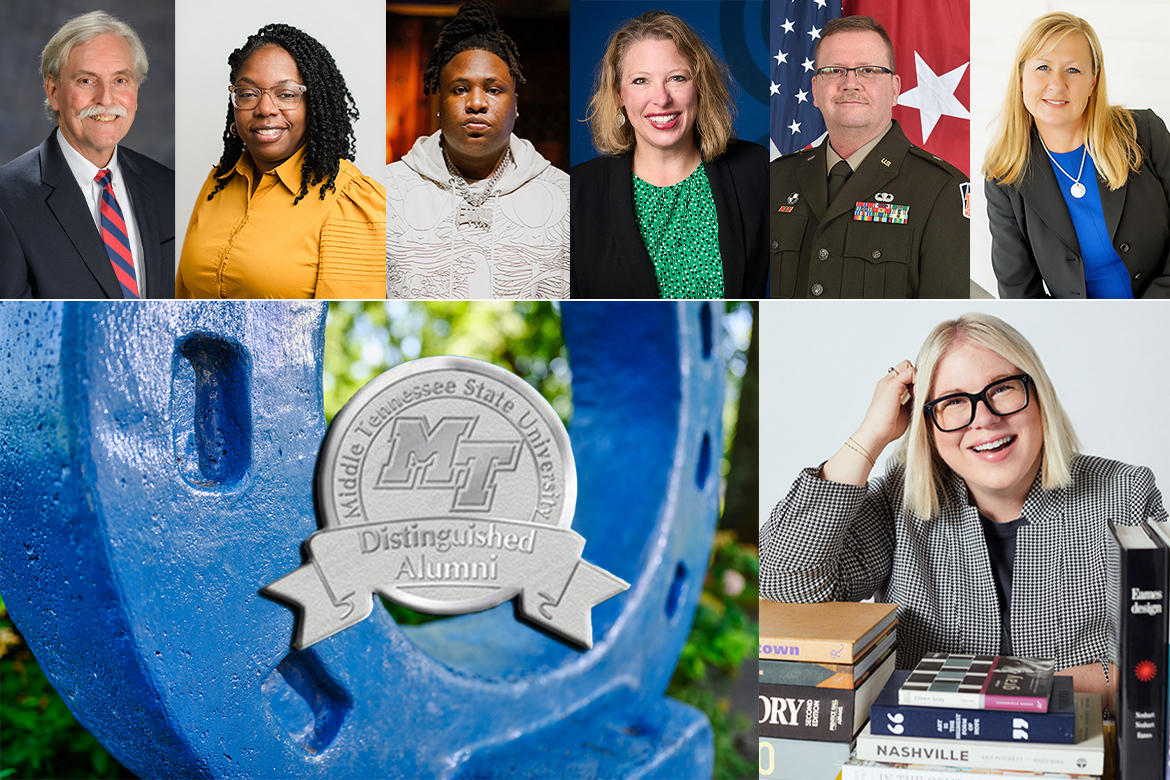 This year’s recipient is Katie Vance (Class of 2005) of Nashville, Tennessee. She is the partner and chief creative officer of Powell Architecture + Building Studio, an award-winning architecture, interior and construction firm in Nashville.

This year’s Young Alumni Achievement Award, given to a graduate age 35 or younger making a positive impact in the world, goes to Tay Keith (Class of 2018) of Memphis, Tennessee. The Grammy-nominated producer and songwriter already boasts an impressive roster of music collaborations that includes Drake, Travis Scott, Beyonce, DJ Khaled and more.

For the ninth consecutive year, True Blue Citations of Distinction are being awarded. Categories include one for military service. This year’s honorees feature:

• Achievement in Education (non-MTSU faculty) — Jackie Morgan (Class of 2008), of Rockvale, Tennessee, the outreach senior adviser at the Federal Reserve Bank of Atlanta-Nashville branch. He is recognized as an established communicator and proven leader in economic and financial education strategy, policy, development and training.

• Service to University — Ed Arning (Class of 1978), of Murfreesboro, former MTSU sports information director who went into private industry before returning to the university as director of two major project areas within the Division of Marketing and Communications.

• Service to Community — Elveta Cooper (Classes of 1996 and 2000), of Nolensville, Tennessee, UPS area human resources manager who has been involved in numerous community organizations.

• Military Service — Brig. Gen. Robert Powell (Class of 1991), of Summerville, South Carolina, a cybersecurity expert in the U.S. Army, the first Army Reserve cyber general and the 17th general officer in the 50-plus year history of the MTSU ROTC program.

“The Alumni Association is excited to recognize the achievements of seven talented alumni,” said Ginger Freeman, Office of Alumni Relations director. “Their accomplishments show the breadth of success of our graduates, and we look forward to honoring and celebrating them as part of this year’s homecoming festivities.

“The addition of the military award in 2021 expanded our opportunity to recognize those that have served or are currently serving our country.”

The Alumni Association will recognize them at several events during MTSU Homecoming Oct. 14-15.

One of the top designers of Nashville’s booming restaurant and hospitality scene, Vance’s work includes Butcher and Bee, Butchertown Hall, The Green Pheasant, The Russell Hotel, The Cordelle and many more. At Powell Architecture, she runs the interior design department, plus the firm’s marketing and social media endeavors.

Vance founded Porter Flea, a well-known handmade modern craft market, to propel Nashville’s independent craft and design scene. She is a 2021 recipient of the Nashville Business Journal’s 40 Under 40 award. Her work has earned praise from regional and national publications, including Garden & Gun, Architectural Digest, Domino, Dwell and Southern Living. She has served on many juries for the MTSU Interior Design Program midterm and final reviews.

Brytavious Lakeith Chambers, known professionally as Tay Keith, earned his bachelor’s degree in integrated studies and media management from MTSU. He was nominated for Best Rap Song for his work on “Sicko Mode” at the 61st Grammy Awards in 2019 just after graduating.

Keith balanced his producing career aspirations with a determination to finish college. He returns to his alma mater often and was named an honorary MTSU professor in 2021, meeting and speaking with students in a new recording studio while holding his honorary certificate presented by the Department of Recording Industry in the College of Media and Entertainment. That year, he also partnered with McDonald’s to promote a new menu item.

Keith is the producer of hits including Lil Baby’s “Never Recover,” Drake’s “Nonstop” and BlocBoy JB’s “Look Alive.” His label, Drumatized Records, has initiated an internship program with MTSU, giving students the opportunity to work with the label and its staff to learn all facets of the music industry business.

“Vaught’s teaching evaluations are among the best in the School of Agriculture, and her Agritourism class has been responsible for hosting two events annually for elementary schools, receiving multiple grants to assist. These educational events combine for well over 1,500 people each year. Vaught has been instrumental in launching a local dual-credit program at MTSU. Her program received national recognition, and she has given four national presentations on dual credit.”

She also serves as a board member and previous three-year president of the Tennessee Jump$tart Coalition for Personal Financial Literacy, which was recognized by National Jump$tart as the state coalition of the year under her leadership.

Her personal honors include the Jones College of Business Exemplar Award, Federal Reserve Bank of Atlanta President’s Award for Excellence, Rutherford Cable Spirit of Leadership Award, the Nashville Emerging Leader Award for Education and a “Top 40 Under 40” selection by the Nashville Business Journal.

Ed Arning arrived on campus as a freshman from Nashville 48 years ago — decades filled with a wide range of roles and duties that, in most cases, focused on promoting the university to everyone and anyone.

Arning, who earned his bachelor’s in mass communications, became sports information director in 1979, covering publicity for 17 sports. As SID, he also was asked to teach media writing to mass communications students. He embraced both roles.

Arning left MTSU and spent 31 years combined in the printing industry and as owner of a sporting goods business, but he remained involved in MTSU athletics in numerous volunteer roles and with financial support.

He returned to the university as printing services director, helping launch MTSU’s move into the elite digital printing world, building a network of peers and mentors, before moving into his current role as market development director, where he continues to promote the university to many new partners.

United Way of Rutherford and Cannon Counties President Meagan Flippin said Cooper “has been involved in community efforts not only through her employment at UPS, but also within many other community organizations. Her commitment to serving others has been particularly evident in her Rutherford Cable involvement, serving in such roles as Diversity and Inclusion Champion, President’s Advisory Council, awards committee and mentor.”

Cooper is co-founder of Taylor & Taylor Family Resource Center, has served as a United Way Champion, a Pencil Foundation board member and Junior Achievement team captain. She received a volunteer service award from President Barack Obama in 2009.

In her UPS role, she served on the Women’s Development Committee and Incident Response Team while hiring more than 300 permanent positions during the implementation of the La Vergne, Tennessee, facility.

Powell was commissioned through ROTC and started his military career as an armor officer with the 1st Calvary Division in Fort Hood, Texas. In 2004, Powell joined the Army Reserve as a military intelligence officer. He commanded the U.S. Army Reserve Cyber Protection Brigade 2016-19.

Powell recently mobilized to support the Cyber National Mission Force at Fort Meade, Maryland. Upon his rise to brigadier general, Powell became the 17th general officer in the 50-plus-year history of MTSU’s Army ROTC program and was the Army Reserve’s first cyber general.