'MTSU On the Record' brings Af..

Bright, animated and full of energy and determination, Chloe Johnstone epitomized many of the girls and young women attending the 25th Tennessee Girls in STEM Conference at MTSU.

“We made it. It worked,” Johnstone, 10, of Hendersonville, Tennessee, squealed with delight as her marble made it down the roller-coaster foam track, through a loop and into the plastic cup. Nearby, volunteer workshop leader Melissa Marr, who works for primary sponsor Nissan and is an MTSU alumna with bachelor’s and master’s degrees, replied, “That’s awesome.” 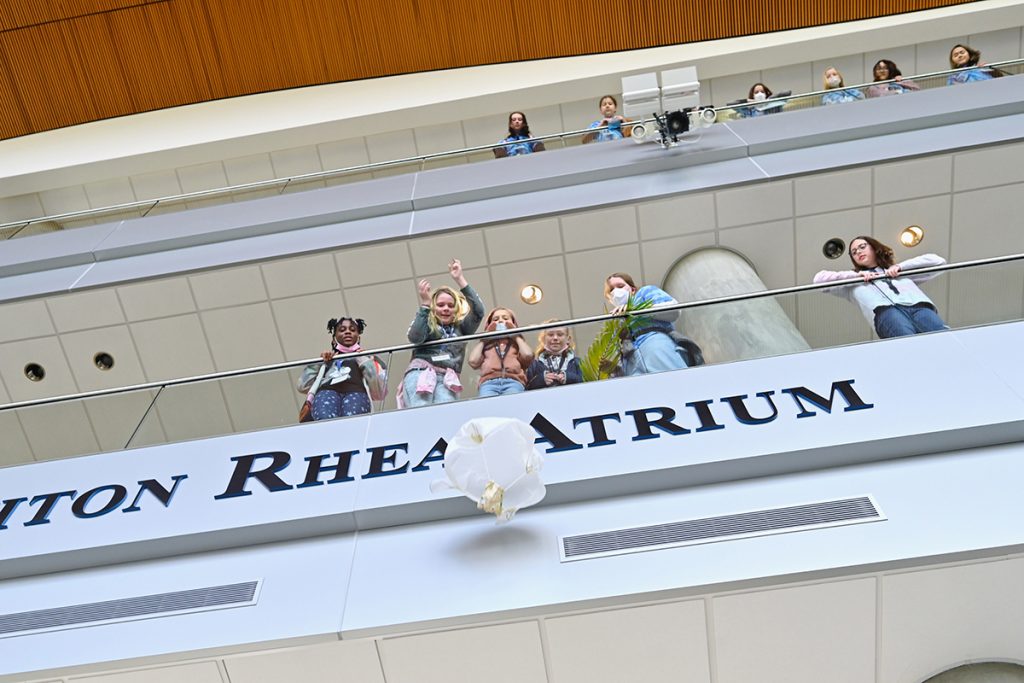 Participants in the 25th annual Tennessee Girls in STEM at MTSU send their eggs on their way by parachute — and hope they don’t break — in ghd ‘Egg Drop” workshop in the Science Building Saturday, April 9. (MTSU photo by Cat Curtis Murphy)

Tennessee Girls in STEM, or TGIS, helps girls and young women investigate science and mathematics careers, hear from women already in those fields, participate in workshops and learn about other girls interested in science, technology, engineering and math

About 175 girls and 50 volunteers attended the conference Saturday, April 9, with most events in the MTSU Science Building. The fall 2021 conference was postponed because of pandemic concerns. 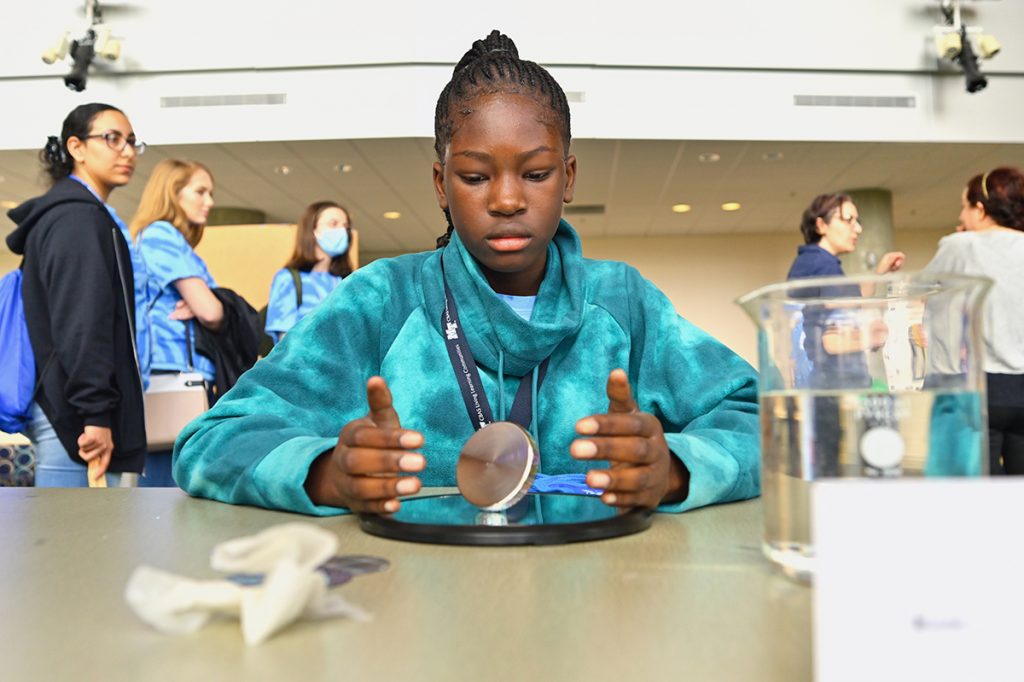 Lexi Tut performs a physics experiment in a “Physics Phun” workshop as part of the 25th annual Tennessee Girls in STEM Conference at MTSU in the Science Building Saturday, April 9. About 100 middle and 75 high school girls participated in the event that was all about science, technology, engineering and math. (MTSU photo by Cat Murphy Curtis)

For Victoria Welch, 15, a Stewarts Creek High School freshman and robotics team member, it marked her third TGIS event that formerly was called EYH or Expanding Your Horizons in Math and Science.

“Today’s been really enlightening,” said Welch, who indicated a career interest in becoming a sales engineer or biomedical engineer with prosthetics. “There’s many amazing speakers that have helped the process through college and after college that have opened up my mind to possibilities that I could pursue in the future — many career ideas and pathways.”

Featured speaker Freneka Minter, an alumna who’s a staff scientist with the Meharry-Vanderbilt Alliance, told participants she “was there to plant a seed so you can grow. Find a mentor who will not only mentor you, but inspire you, will teach you new things, nurture you, encourage you and will reach out to you when there are opportunities they come across and expose you to those opportunities.”

Minter’s career has included working with the Tennessee Department of Health, Oak Ridge Associated Universities, the FBI and more. 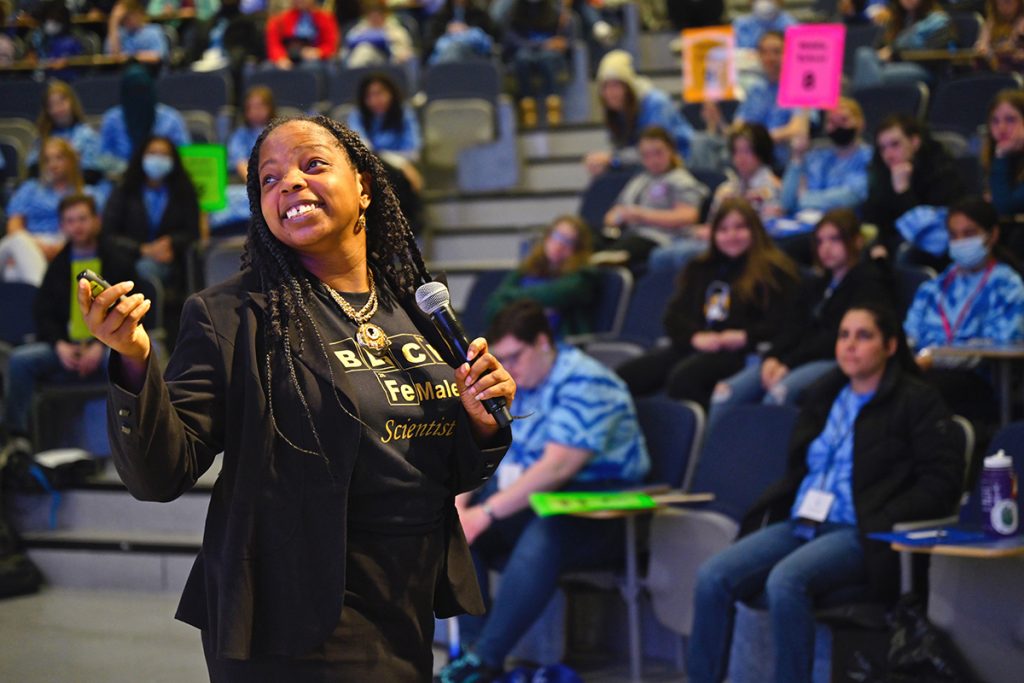 As participants in the background listen, featured speaker Freneka Minter, an alumna who’s a staff scientist with the Meharry-Vanderbilt Alliance, told participants she “was there to plant a seed so you can grow.” Minter’s career has included working with the Tennessee Department of Health, Oak Ridge Associated Universities, the FBI and more. (MTSU photo by Cat Curtis Murphy)The high school girls heard from an outstanding panel from a variety of fields, featuring Minter, Brooke Duke with the TBI, Keyann Reaves with Vanderbilt University Medical Center, Creea Shannon with Correlation One, MTSU environmental specialist Cynthia Allen and moderator Heather Johnson with DevDigital. Most are alumni.

Judith Iriarte-Gross, event director, chemistry professor and MTSU Women in STEM director, said the STEM conference was “super successful. We had girls getting excited about bottle rockets, about learning how to be a veterinarian and so many challenging, hands-on workshops.”

Iriarte-Gross thanked the committee and faculty, students and others who were either workshop leaders and assistants.

The conference is sponsored by the MTSU College of Basic and Applied Sciences, InfoWorks, Schneider Electric, Texas Instruments and the Nashville local section of the American Chemical Society. 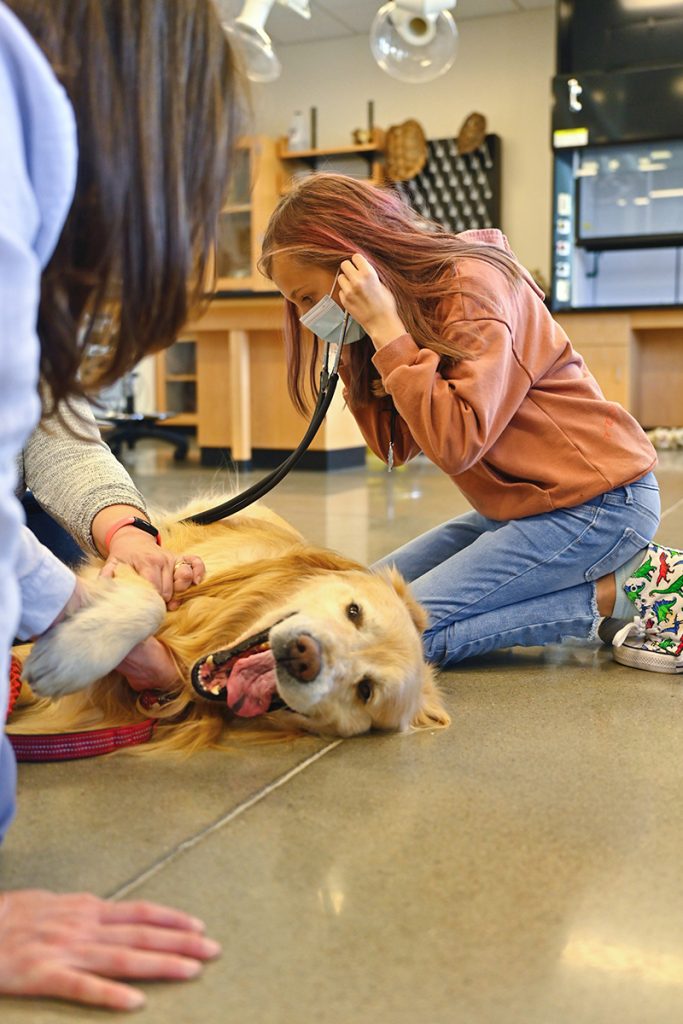 Tennessee Girls in STEM middle school participant Charlie Olson listens to the heartbeat of the dog, Nova, Saturday, April 9, in a Science Building laboratory. It was one of numerous workshops for middle and high school girls in the annual event at MTSU. (MTSU photo by Cat Curtis Murphy)