An attorney and judge, Gonzales delivered a speech to government lawyers in Norfolk, Virginia, that morning. He already knew a plane carrying 93 people crashed into the World Trade Center north tower in New York City. A second plane with 65 people on board crashed into the south tower 17 minutes later. 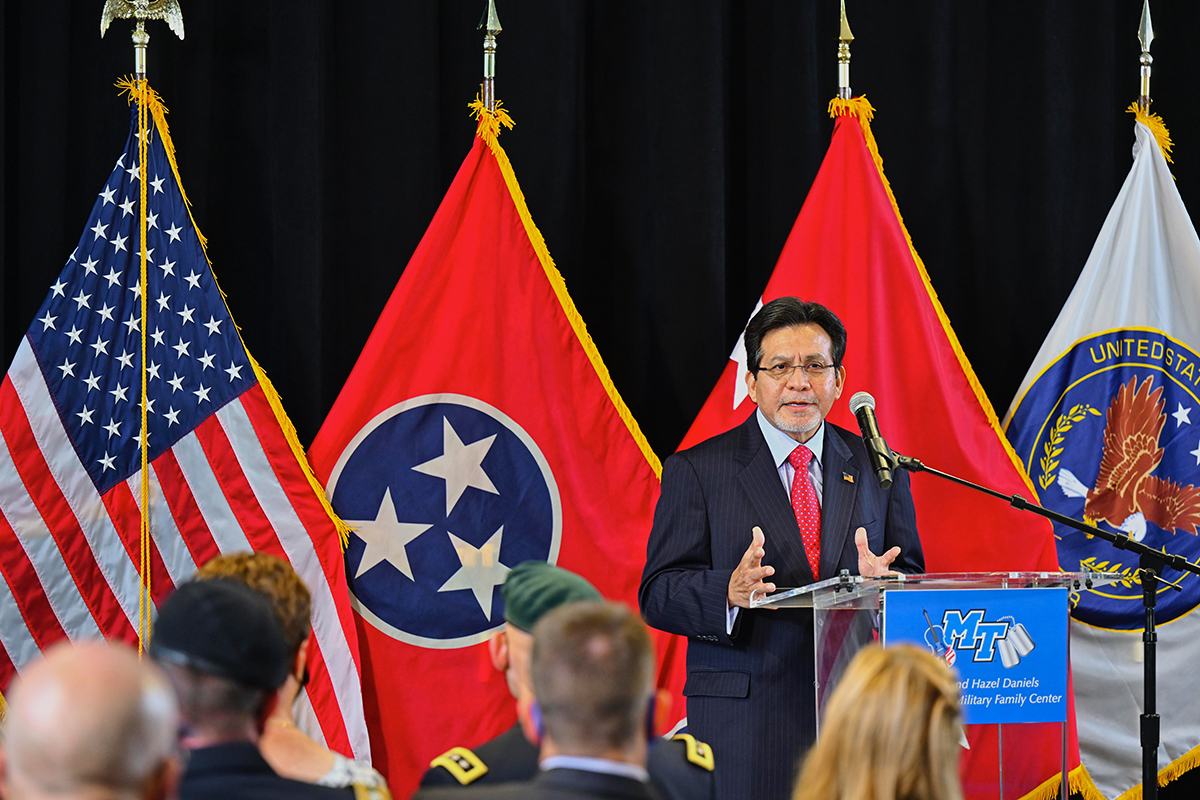 Former U.S. Attorney General Alberto Gonzales said the 20th anniversary of 9/11 “has been somewhat emotional for me … and I’m grateful for the remembrance of what happened that day,” Gonzales spoke during the seventh 9/11 Remembrance Saturday, Sept. 11, in the MTSU Tom H. Jackson Building’s Cantrell Hall. (MTSU photo by Cat Curtis Murphy)

“I knew immediately (Muslim militant group) al-Qaida was involved, that it was an attack from outside our borders. I knew I had to get home,” said Gonzales.

Coordinated by the Charlie and Hazel Daniels Veterans and Military Family Center and sponsored by HCA Healthcare/TriStar Health, the event commemorated the 20th anniversary of a series of four coordinated terrorist suicide attacks by al-Qaida on U.S. landmarks. The show aired on True Blue TV and Livestream. To view video from the event, go here.

Gonzales recalls how the rest of the day continued, being stuck in Norfolk until eventually returning to Washington, D.C., and talking to key officials about what actions legally could transpire. He remembers “a very emotional” reunion and “long hug” with wife Becky.

Impacts Gonzales felt then included “being gratified seeing members of Congress working together to provide aid and comfort, the leadership of the president to protect America and our job to protect him.”

“This anniversary, has been somewhat emotional for me and had an impact on me,” he said. “I’m proud of my service. I’m proud that men and women in uniform who, after the attacks of 9/11, did their job of protecting our country. And I’m grateful for this remembrance of what happened that day. And I think for a period of time our country came together, and I’m hopeful that once again our country can come together.” 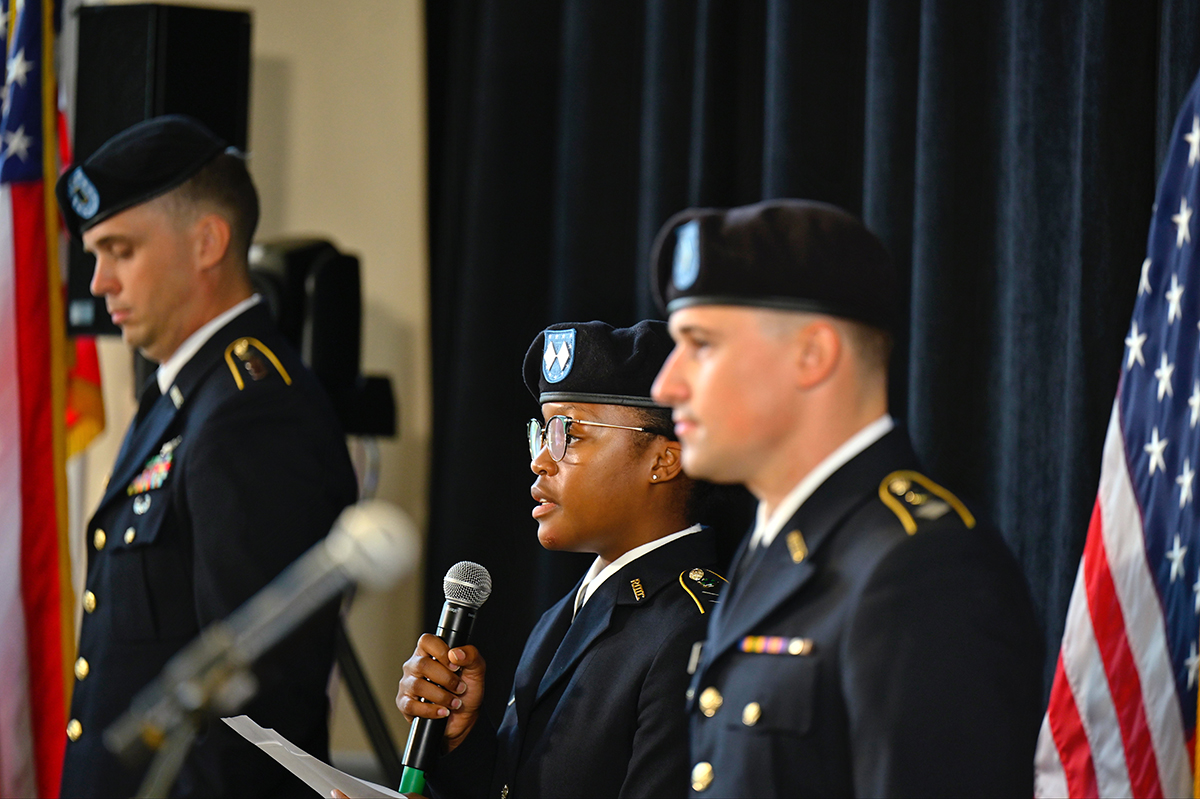 “We must be prepared to defend our democracy from people who would steal our freedom,” said Huber, who deployed to Kosovo and later to Afghanistan and who knew people who had family members at the Pentagon and solders who lost parents at the twin towers.

“I remember with pride that men and women, first responders, were willing to give their lives like any soldier on the battlefield,” Huber added. “The concept of literally responding to crumbling, burning destruction of buildings and debris is a point of inspiration and humility.

“My experience on the battlefield tells me that you give your life for the person to your left and right, because you’ve shared the hardships and the sacrifice and the commonality of mission and task and you know that you’re prepared at any moment out of a sense of unconditional trust and respect.” 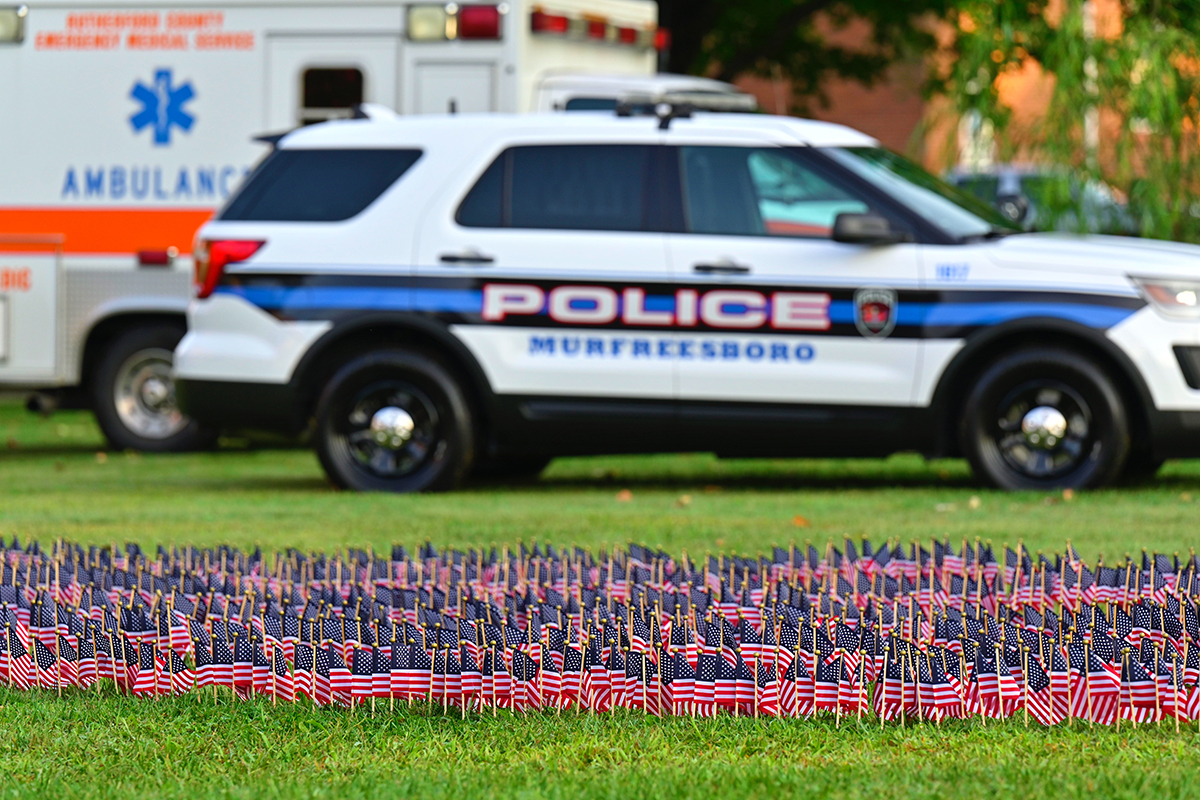 Along with a field of U.S. flags representing the 2,977 casualties from the 9/11 attacks on Sept. 11, 2001, static displays of first responder vehicles (Murfreesboro City Police and Fire and Rutherford County EMS) were part of the 7th 9/11 Remembrance Saturday, Sept. 11, near the MTSU Veterans Memorial. (MTSU photo by Cat Curtis Murphy)

Porter Mitchell, a fourth grader in Florence, Alabama, in 2001, has vivid memories of Sept. 11. His parents checked him out of school for two days. He and his family watched the news unfold on television. Teachers at his school had family members who managed to escape alive from the twin towers. His ninth birthday on Sept. 12 was lost in all the chaos. As it did with many Americans, the events that day changed his life.

“It made me angry, sad and scared,” said Mitchell, now 29 and from Murfreesboro, an MTSU ROTC cadet pursuing his MBA and planning to be a U.S. Army officer. “I made a promise in the fourth grade that I was finally able to fulfill. It pushed me over the top to want to serve, to give back. And here we are (20 years later).”

ROTC Blue Raider Battalion Commander Alexis Anderson of Memphis, Tennessee, battalion executive officer Caleb Watts of Salem, Missouri, and Mitchell, the battalion operations officer, read the timeline of 9/11 events and gave reflections on how that day affected them as well. Anderson, 21, is an exercise science major and minoring in health and military science. Watts, 24, is pursuing his doctorate in economics.

Displayed near the MTSU Veterans Memorial were Murfreesboro Fire, Rescue and Police vehicles, plus 2,977 small U.S. flags, representing the first responders and people who died in the twin towers and plane crashes. MTSU ROTC cadets placed the flags there Friday morning. 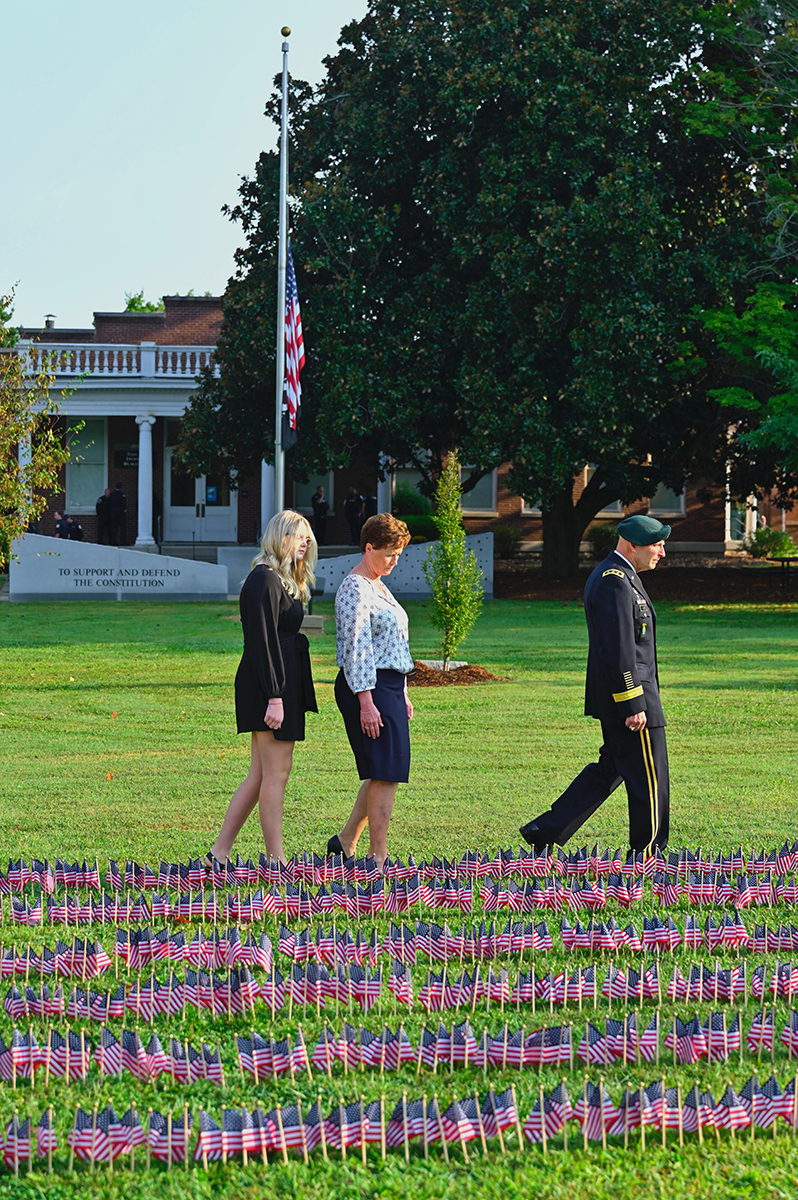