Many of them weren’t even born; others were too small to understand the magnitude of what happened in the United States on Sept. 11, 2001. 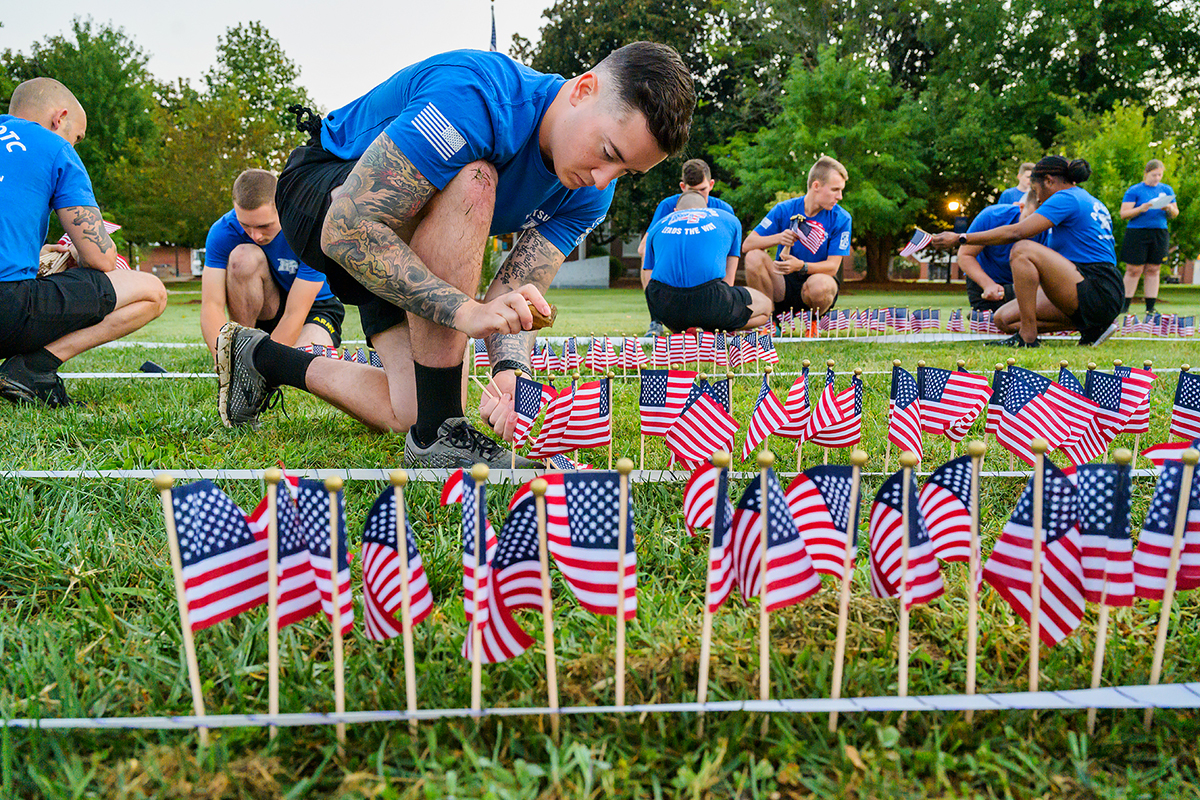 MTSU senior ROTC cadet Michael Maynard of Pleasant View, Tenn., and nearly 60 cadets, student veterans, SGA officers and others place nearly 3,000 small U.S. flags in the ground to commemorate the 20th anniversary of 9/11 on Friday, Sept. 10, near the Veterans Memorial outside the Tom H. Jackson Building on campus. (MTSU photo by Andy Heidt)

The nation will pause at various times on Saturday, Sept. 11, and much of the entire weekend to reflect on the lives lost and heroism displayed during a series of four coordinated terrorist suicide attacks by the extremist group al-Qaida on U.S. landmarks 20 years ago.

Charlie and Hazel Daniels Veterans and Military Family Center Director Hilary Miller conceived the idea for the flags, reading of names and more. U.S. Army Lt. Col. Carrick McCarthy, the head of the Military Science Department, chose Army veteran and senior cadet Michael Maynard to work with Miller to carry out the plan and meet the objective.

“When Dr. Miller told me her idea, I thought it would be important for our cadets’ development into Army officers that they be a part of this temporary memorial,” McCarthy said.

“As we get further and further away from the events of that day, it is harder to appropriately convey the impact to our younger generation, those who have no memory of how the world changed,” he added. 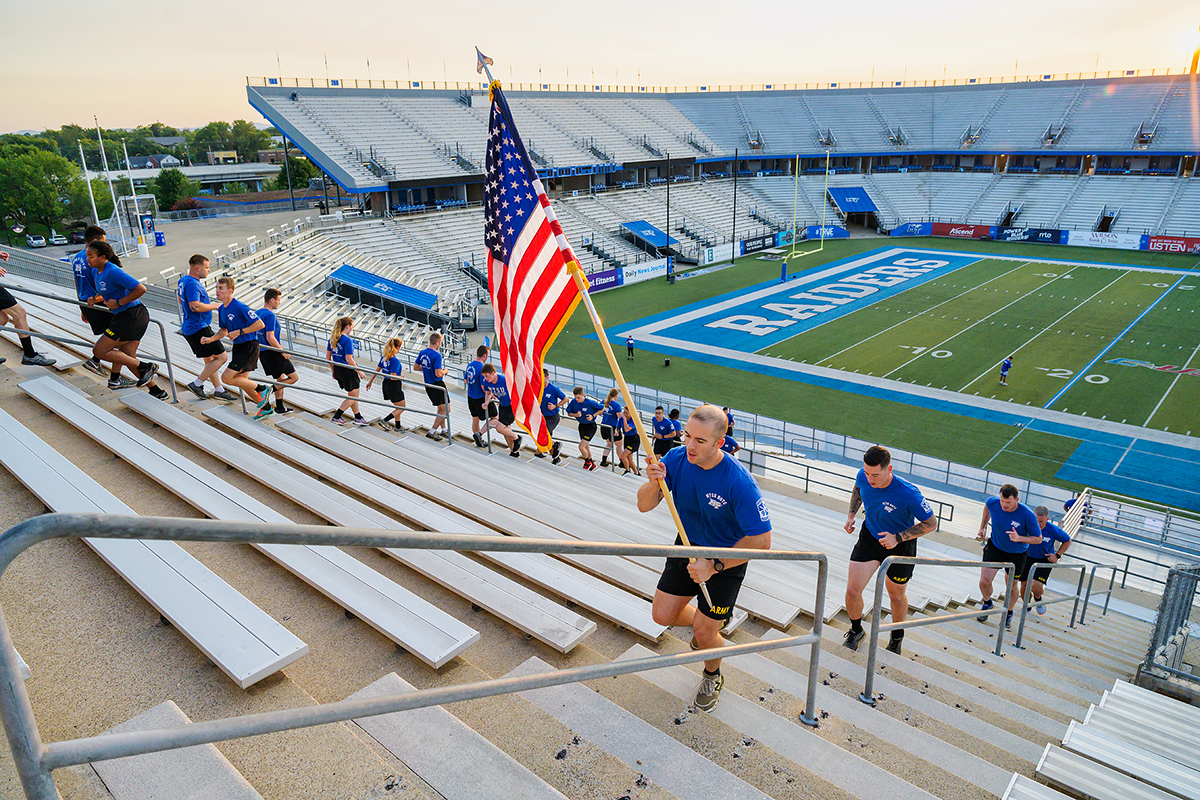 A cadet and veteran’s perspective

Maynard, 25, who lives in Pleasant View, Tennessee, with his young family (wife Taylor and 9-month-old son Oliver), was 5 when 9/11 occurred. “The only part I remember was sitting in our living room seeing the two towers and seeing the smoke,” he said.

“We were teaching those (younger) cadets the experience of a tragedy and to never forget those who paid the ultimate price. On the stair climb, we were constantly asking each other, ‘Did you give your all because others did?’ … This was a fuel to restart a fire for the cadets — an event to keep you motivated through hard times in the military.”

A business commerce major minoring in ROTC and aiming to become an Army officer, Maynard said cadets “can make it a better memorial next year. It can be more of an invite for students and more of a community event. This should symbolize what has happened and the fact that through tragedy or adversity, we can persevere together as a whole.” 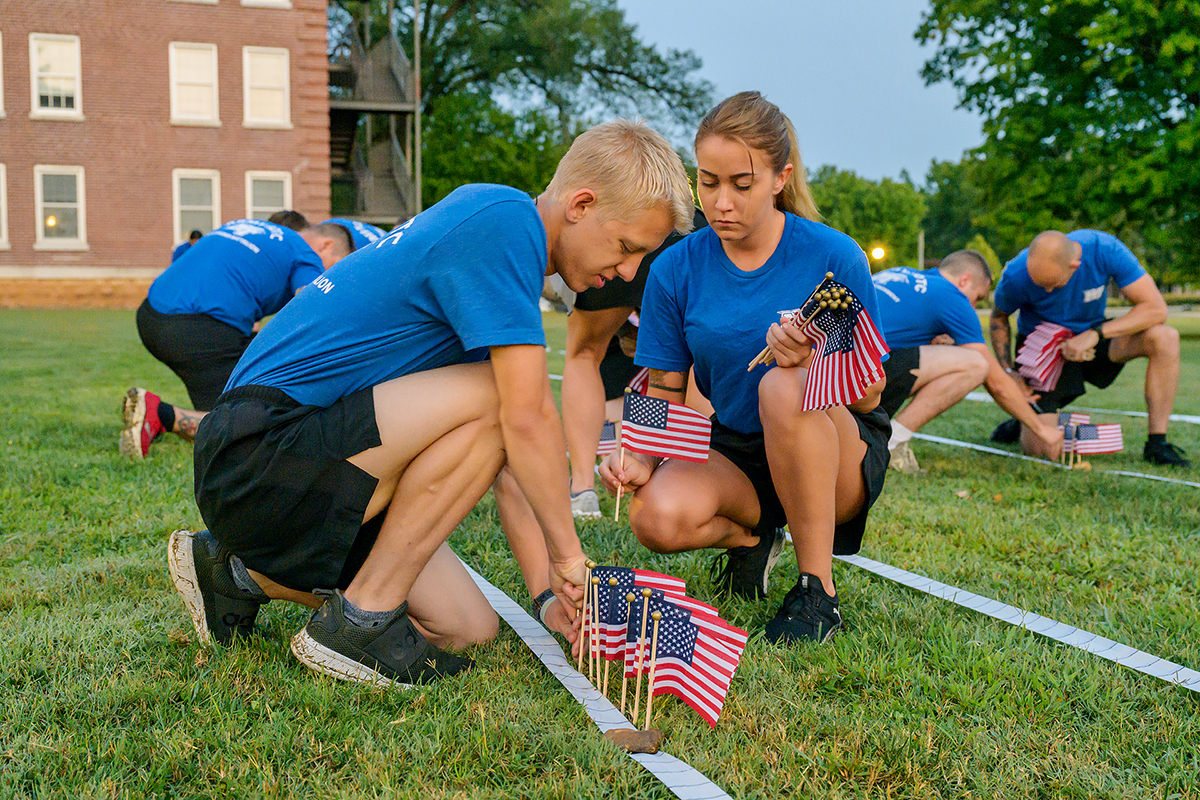 MTSU ROTC cadets Ethan Hawks and Aiyanna Gallant plant U.S. flags in a grassy area outside the Veterans Memorial and Tom H. Jackson Building at 6 a.m. Friday, Sept. 10, to help commemorate the 20th anniversary of 9/11. Sixty cadets, student veterans, SGA members and military science faculty took part at this location and in Floyd Stadium. Nearly 3,000 flags and 2,977 names of victims who died in the Sept. 11, 2001, attack on U.S. soil during a series of four coordinated terrorist suicide attacks by the extremist group al-Qaida on U.S. landmarks. (MTSU photo by Andy Heidt)

McCarthy and his faculty “have a very talented group of cadets that make up our cadet leadership,” he said.

“When we briefed them the intent for this morning’s activities, they immediately ran with the concept and did all of the detailed planning necessary to make the event a success,” he added. “Always seeking a challenge, they even proposed the idea to run the steps of Floyd Stadium as a way to honor the first responders we lost that day. I’m certain that the sacrifice and effort shown by our first responders that day was not lost on our cadets. Myself and the rest of the cadre are extremely proud of their efforts.”

On Sept. 11, 2001, McCarthy was a senior cadet at West Point in New York. He was in a class when an instructor entered and told them to turn on the television.

“We watched in horror as the second plane crashed into the tower and the towers later fell,” he said. “Everything about my future changed that day. The Army profession immediately became real to us that morning.

“I’ll never be able to replicate the feeling I had that Tuesday morning into our cadets. However, my hope is that as they were hammering in the flags, climbing stairs and listening to the names of the victims the Army profession that we teach them about in the classroom will become a little more real.” 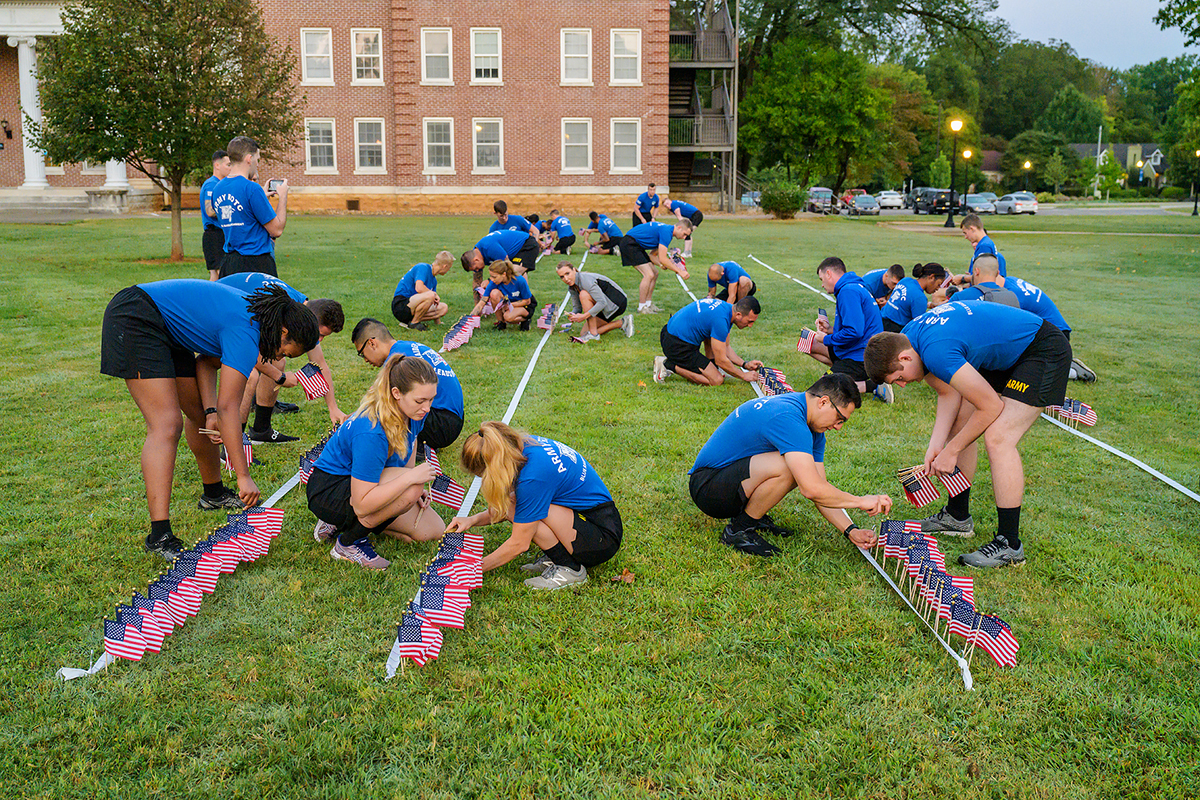 MTSU ROTC cadets, faculty and other volunteers place a portion of nearly 3,000 small U.S. flags in an area near the MTSU Veterans Memorial and Tom H. Jackson Building just after 6 a.m. Friday, Sept. 10. The cadet-led project commemorated the 20th anniversary of 9/11. (MTSU photo by Andy Heidt)