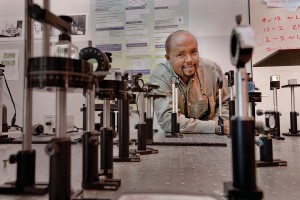 Dr. Daniel Erenso, associate professor of physics and astronomy at MTSU, uses an experimental technique that enables him to “grasp” individual cells with a laser beam to study the morphology and elasticity of red blood cells (RBCs) by measuring their responses to linear and rotational deformations. What’s the upside? Abnormalities in RBC shape or flexibility, which are caused by genetic mutation, can result in sickle cell (SC) diseases.

The prevalence of these diseases in the United States is approximately one in 5,000. Worldwide, an estimated 300,000 affected individuals are born each year. SC affects mostly people (or their descendants) from parts of tropical and subtropical regions since the gene mutation is caused by frequent exposure to malaria, which is common there. According to an article published in the New England Journal of Medicine, the average life expectancy of individuals with SC diseases is 42 for males and 48 for females.

Though several treatments have been developed to treat these diseases, the most promising technique is stem cell–targeted gene therapy. Recently, a clinical trial conducted in mouse models by a group led by Dr. Derek Persons at St. Jude Children’s Research Hospital in Memphis corrected two common types of sickle cell diseases: sickle cell anemia and beta-thalassemia.

Future human clinical trials of such stem cell–targeted gene therapy will require a different approach to measure the efficacy of the treatment in mice. One method is to conduct a comparative study on the elasto-mechanical properties of the normal, the sickle, and the genetically corrected RBCs of the mouse model using laser tweezers. In 2010, Erenso teamed up with Persons to conduct this study. Erenso and coworkers found that new blood cells generated through the gene therapy technique have properties resembling those of healthy cells, a breakthrough for the scientists and good news for those with sickle cell diseases.

More recently, Erenso has been busy building a new device: a “magnetic” tweezer that will eventually allow him to study red blood cells at the molecular level—an even smaller dimension. Given Erenso’s cutting-edge approach to SC research, it comes as no surprise that another higher education institution in Middle Tennessee, Meharry Medical College, home of a sickle cell center, has recently reached out to collaborate with the MTSU professor.