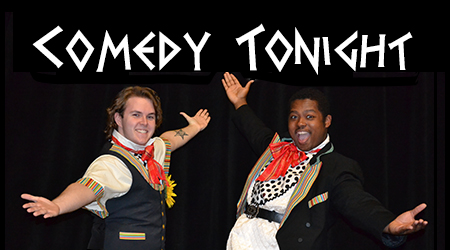 Whether you’re looking for something familiar or something peculiar, MTSU Theatre will have the answer beginning Thursday, April 4, with a new production of the Stephen Sondheim musical comedy classic, “A Funny Thing Happened on the Way to the Forum.”

“A Funny Thing Happened on the Way to the Forum” will carry the audience all the way back to ancient Rome to follow a slave named Pseudolus and his various machinations to win his freedom.

Its most recognized song is its opening number, “Comedy Tonight,” which is regularly used in revues and charity performances.

Pseudolous, portrayed by MTSU sophomore Matthew Hunter, left, tries to persuade Hysterium, played by junior Christian McLaurine, to pretend to be a corpse in the Tucker Theatre production of “A Funny Thing Happened on the Way to the Forum.” (photo courtesy of MTSU Theatre and Dance)

“I love Stephen Sondheim’s music and lyrics and am really thrilled with our cast and the way they are handling the material,” said Shamburger. “It is a farce, which I like to say is ‘comedy on steroids.’”

The show, which opened in 1962 with Zero Mostel in the lead role, won Best Musical, Best Actor, Best Supporting Actor, Best Book and Best Director trophies at the 1963 Tony Awards and continues to be performed all over the world.

The Tucker Theatre Box Office will open one hour before each show, and the theatre will open for seating 30 minutes before curtain time. The box office will close promptly when each show begins, and no tickets will be sold during the shows.

For more information about the show, or to buy tickets online, visit www.mtsu.edu/tuckertheatre. You also can call the Tucker Theatre Box Office at 615-494-8810. A map of MTSU arts venues is available at www.mtsu.edu/socialmedia/docs/mapforweb.jpg.