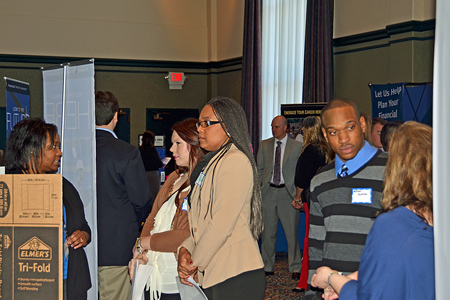 MTSU’s Career Development Center welcomed representatives from more than 40 companies on March 21 as they gathered in the James Union Building to participate in the spring Internships and Summer Jobs Fair.

All were looking for talented students and graduates to fill available summer internships or permanent career opportunities. Participants included recruiters from insurance and financial corporations; media, marketing and communications companies; and retail, sales and healthcare groups.

While a portion of the businesses had attended the fair previously, for others, it was the first visit.

Sadie Fowler, editor of the Shelbyville Times-Gazette, came to the fair in hopes of finding people to meet the paper’s creative and graphic design needs as well as to serve as new additions to the features staff.

“You never know when you’re going to meet that next rising star, the perfect candidate for your organization,” Fowler said. “I never pass an opportunity to talk with students.”

Reagan Poe Collins, general manager of the Ralph Lauren factory store in Opry Mills mall, has attended other regional job fairs and explained how they are the best way to meet potential employees.

“A career fair gives you the opportunity to meet people in person, whereas online it doesn’t always translate in the same way,” said Collins. “We want to go out and hand-select our talent. The more you can get out in your community and do that, the more successful you’re going to be in your market.”

Companies were searching for candidates to fill specific positions, including paid and unpaid internships as well as full-time jobs.

Student turnout was strong during the Internship and Summer Jobs Fair held March 21 in the James Union Building.

Rene Inman, director of recruiting for Capital Financial Group, said that even though the corporation is offering unpaid summer internships, there is a potential for long-term employment for those who excel.

“A lot of students like to submit the resumes right here, and I always accept those and I make notes about which students might be a good fit with what we’re trying to do,” Inman said.

Explaining the opportunity to network at a career fair, she continued: “People only have one chance to make a first impression, and employers like to see that students are thinking about future employment. When they are passing out their resumes, the employers can see that the students are actually taking steps to be in a place where they can be offered a position.”

Dusty Doddridge, assistant director for employer relations in the Career Development Center, said he was pleased with the student turnout.

“Research tells us that students with internships fare better in the initial job search and also have more longevity with their first employer,” he said.

When asked to give advice to the students who attended the event, Doddridge said: “After leaving the fair, the No. 1 priority is that we want them to follow up with the recruiters that they connected with.”

However, he said, he also wants students to know that the Career Development Center assists MTSU students and alumni during their search for employment.

“Certainly we want every student to work with us so that we can help them with their career plans, resumes, interview skills and job search strategies. That’s why we’re here.”

Doddridge said students are encouraged to make an appointment to discuss their career goals, but added that each day the center makes every effort to accommodate as many people as possible.

Additional information on the Career Development Center and future job fairs can be found at http://mtsu.edu/career or by contacting Doddridge at dusty.doddridge@mtsu.edu.