A Look Back at Significant News Developments

A Look Back at Significant News Developments 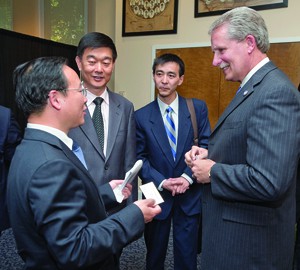 MTSU’s ongoing efforts to build international relations and its international student population is still on track with the Confucius Institute.  The institute’s main purpose is to enhance the understanding of Chinese language and culture, facilitate engagement with China, which is Tennessee’s third largest export market, and create opportunities for exchange and collaboration between communities in Tennessee and China.  The University partnered with Hangzhou Normal University to sponsor the Confucius Institute at MTSU.

The new College of Behavioral and Health Sciences gathers service-oriented educational disciplines under one umbrella.  It includes the departments of Criminal Justice Administration, Health and Human Performance, Psychology, Social Work, and Nursing, as well as the Communication Disorders concentration, several centers, and the Adams Chair of Excellence in Health Care Services.  To learn more, go to www.mtsu.edu/cbhs. 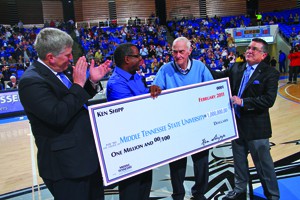 A $1 million gift commitment from Ken “Coach” Shipp, a 1947 graduate, will have a significant impact on campus.  First, Shipp’s gift will further enhance the endowed scholarship he established in 2009 ensuring that money is not the determining factor in whether or not Rutherford County students with promise and potential are able able to attend MTSU.  Next, the gift will allow for renovations of the coaches’ office space in Murphy Center for the Lady Raiders basketball program.  Now 83, Shipp was an assistant coach in the National Football League and during the 1975 season was interim coach of the New York Jets.  During his career, he coached both Archie Manning and Joe Namath.

MTSU landed in the top 15% of military-friendly schools in the U.S., according to a recent survey by G.I. Jobs magazine.  MTSU currently enrools nearly 1,000 veterans.  the magazine cited MTSU’s Military Center, established in 2009, as a major reason for the lofty ranking.  The future of that center, a one-stop shop located in the University College for veteran students, depends on a pending grant to fund a director’s position and an advisor.  for more information, call (615) 494-8952, or visit www.mtsu.edu/military.

Ten MTSU seniors are shooting for the same prize captured by 2010 graduates Kaitlen Howell and Eric Little last year: Fulbright Fellowships to study abroad for one academic year.  The 10 applicants, twice as many as applied a year ago, will learn their Fulbright fates by mid-summer.  Discover more about the program, the stated purpose of which is “to increase mutual understanding between the people of the U.S. and other countries through the exchange of persons, knowledge, and skills” and eligibility requirements by calling (615) 898-5464.

For the first time in six years, MTSU students and faculty will have the opportunity to study and perform research in Cuba this summer. Dr. Ric Morris, professor specializing in Spanish and linguistics, says the program has been revamped to comply with new laws.  Contact Morris at (615) 898-2284.

Giving back has always been part of Jim Gaines’ DNA.  The ’69 graduate (B.S. history) recently reaffirmed not only his generosity but his unwavering devotion to his alma mater by moving forward to establish the Jim Gaines Endowed Chair in American History through his estate.  The gift ultimately will enable the university to recruit a renowned historian to the faculty.  A former six-year board member of the MTSU Foundation, Gaines has been a stalwart of the insurance business for decades.  In 2003, he formed his second company, Jim Gaines Insurance and Financial Services.  He did so just two years after he sold his original insurance agency, Insurance Designers of San Diego, which he formed in the mid-1980s.

A Change in the Air Waves

MTSU’s current construction projects -those creating a new campus skyline- include the $30 million, 87,300-square-foot education building that will house the newly configured College of Behavioral and Health Sciences.  It is slated to be occupied this summer.  The new $77-million student union, scheduled to open its doors in the summer of 2012, will feature dining facilities, lounges, game rooms, a video theater, meeting and seminar rooms, and an 840-seat ballroom, among other amenities.  An adjacent building will serve as a one-stop shop for all student services. 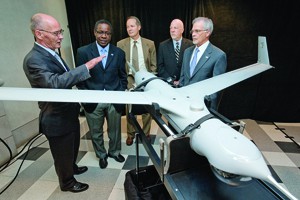 Eye in the Sky

MTSU and ISR Group of Savannah, Tenn., will develop an unparalleled Unmanned Aerial System program in the southeastern U.S. Unmanned aircraft is in high demand for the use in defense and homeland security, law enforcement, emergency management and agriculture.  MTSU’s Department of Aerospace is also assisting the Federal Aviation Administration to define standards for small UAS flight operations and training certifications, as well as manned and unmanned next-generation air traffic management, to ensure safe integration of UAS into the national airspace. 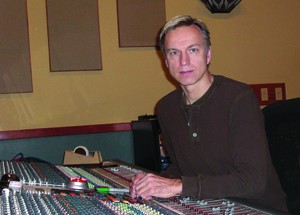 Going for the Grammys

MTSU basked in the national spotlight at he 53rd Annual Grammy Awards Feb. 13.  Recording Industry professor John hill won a Grammy for “Best Engineered Album, Classical” for his work on Daugherty: Metropolis Symphony; Deus Ex Machina by Giancarlo Guerrero and the Nashville Symphony Orchestra.  Alumnus Clarke Schliecher (B.S. ’80) won a “Record of the Year” Grammy for engineering and mixing Lady Antebellum’s “Need You Now” single -defeating records by (among others) Eminem and Alicia Keys.  And Alumnus Josh Kear (B.A. ’96), a former MTSU History major, co-wrote “Need You Now,” which won him two Grammys, one for “Song of the Year” and one for “Country Song of the Year.”  Kear now boasts three Grammys.

MTSU continues to experience impressive enrollment increases.  Final spring semester enrollment totaled 24,660 students.  That’s an increase of 4.26% over 2010 and marked a record enrollment for the spring.

By mid-may, the MTSU farm at 3001 Guy James Road will boast a new $4 million dairy facility. The MTSU dairy provides chocolate and white milk for campus dining facilities.  3,800 pounds -or one-third of the dairy’s production- is consumed on campus every week.  The remaining milk is sold to the Maryland & Virginia Milk Producers Cooperative Association.