A Look Back at Significant New.. 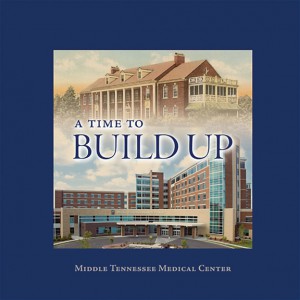 In a time when complicated surgeries are being performed with the assistance of robots, it’s hard to believe that well into the 1920s doctors were conducting procedures on kitchen tables by lantern light. Realizing the need was great, a group of dedicated citizens toiled to bring a Child’s Health Demonstration and eventually a small hospital to Rutherford County to improve medical care for the county and surrounding areas. A recently released book, A Time to Build Up, commemorates the 83-year legacy of Middle Tennessee Medical Center (MTMC) in Murfreesboro from the beginning to the opening of the new MTMC, a $267 million facility, in 2010. Written by freelance writer Patsy Weiler (’78), the project included fellow MTSU graduates Susan Grear (’79), executive editor; Angie Boyd-Chambers (’01), MTMC’s former public relations director (now at Saint Thomas Health); and Erin Yeldell (’08), MTMC public relations coordinator for the book.