With a new $147 million science building finally under construction, MTSU prepares to take its science and research efforts to the next level 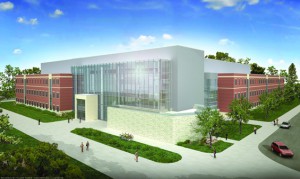 This past spring, the Tennessee General Assembly approved state funding to build a brand-new, state-of-the-art, $147 million science building on the campus of Middle Tennessee State University. The building, currently under construction, will open its doors to students in just a few years.

As anyone familiar with the programs and infrastructure at MTSU will attest, the building is as desperately needed as it is long overdue. And yet, when viewed in the greater context of the other changes sweeping across the campus, the state, and beyond—from an evolving University mission to shifting funding formulas to exploding scientific frontiers—the timing couldn’t be more perfect.

To best understand the importance of the new building, it helps to first understand the glaring inadequacy of MTSU’s current science facilities. The existing Wiser-Patton and Davis Science buildings (built in 1932 and 1967, respectively) house most of MTSU’s science programs in a combined 75,332 net square feet. In 1968, just after the Davis building opened, MTSU’s student population was 6,779; by fall 2011, the University’s enrollment was 26,442. That’s an almost fourfold increase with no corresponding expansion of the space for science education.

When it comes to science, cramped, decades-old buildings are more than just an inconvenience—they can be physically hazardous. The spotty effectiveness of ancient ventilation hoods throughout the current chemistry building have long been a concern when working with noxious compounds.

But for all their bricks-and-mortar-related shortcomings, the most telling cost of the Davis Science and Wiser-Patton buildings is academic—the buildings are grossly out of touch with modern science instruction. Current laboratory and instructional spaces are geared to a population from the 1930s to the 1960s—the decades in which they were built—and a time when science instruction was mostly passive, delivered lecture-style with students seated while professors demonstrated experiments.

Worse still, there are any number of new approaches and innovations in science that simply cannot be accommodated by the existing buildings. Biology and chemistry in particular are rapidly evolving disciplines that can change literally overnight. For example, whereas in the past the study of the human genome required a very specialized laboratory with very expensive equipment, these days such research is no longer the sole property of elite faculty or universities. Without adequate facilities, though, MTSU has been left behind in genome analysis.

Quite simply, the list of scientific endeavors hampered by the University’s existing infrastructure includes nearly every branch of study. After more than forty years, it wasn’t a matter of merely falling behind or even being lapped by other schools—MTSU’s science facilities didn’t even allow it on the same track.

Those days will soon be past. The new building will provide more than 250,000 gross square feet of teaching, faculty and student research laboratories, and collaborative learning spaces for the more than 13,000 students, both majors and nonmajors, who are enrolled annually in biology, chemistry, and physical science courses at MTSU.

Life for MTSU students enrolled in science classes “just got infinitely better, ” says Dr. Elliot Altman, head of the new Ph.D. program in molecular biosciences. “I am pleased to say they are not cutting any corners,” adds the former University of Georgia professor, who has himself been a part of the planning of three different buildings in his career.

Tom Cheatham, outgoing dean of the College of Basic and Applied Sciences, is quick to point out that despite the substantial handicap imposed by archaic infrastructure, the science faculty and students have done “an amazing job.” Still, he’s also the first to admit “it’ll be a whole new ballgame in the new facility.”

That “whole new ballgame” starts with MTSU’s newfound potency on the recruiting trail—both in terms of high-achieving, science-minded students, and nationally renowned faculty members to teach them.

Dr. Preston MacDougall, professor and past interim chair of the Chemistry Department, says in the past, even if top young scholars wanted to come to MTSU, their parents often disallowed it.

“Parents have actually complained to the Tennessee Board of Regents after touring our current facilities because they were hoping to send their child to MTSU until they saw the science buildings.”

For his part, Brad Bartel, MTSU provost, is relieved such stories will soon be a thing of the past. “We will boast the finest science facilities in the state and second to none in the country,” he says.

Not surprisingly, the new building is already proving to be a powerful strategic tool for regional, national, and international recruiting of students. “We take renderings of the building with us,” says Dr. Michael Allen, dean of the College of Graduate Studies and MTSU vice provost for research.

The same is true of recruiting top faculty and administrators. At press time, MTSU had recently hired a new dean of the College of Basic and Applied Sciences, a new chair of Biology, and a new chair of Chemistry, and was looking to fill several other key faculty positions (genomists, molecular biologists, cell biologists) across the science disciplines.

“It’s great to be able to tell the finalists for these positions that they will have these amazing facilities, that they will be in a leadership position to do pioneering work in the sciences,” says Bartel, who spearheads such hiring. “We’ve been stymieing science for decades here. Particularly for our people who deal at the molecular level, it’s going to make a huge difference to MTSU.”

The timing of such high-profile hires occurring along with the construction of the new science building is a happy coincidence to say the least, enabling the University to target new faculty with solid, focused research agendas who can really ramp up MTSU’s profile as a research institution.

“We’re starting to be able to change our personnel a little bit,” Allen says. “We used to get people who were really dedicated to teaching and didn’t necessarily want to be involved in that much research. Now we’re able to attract people who want to spend a large share of their time doing research and bringing in external-sponsored awards.”

Historically speaking, research has not been a strong component of MTSU’s mission—but that’s changing rapidly. The new science building is a game changer with regard to nascent research efforts.

“There are those in the state who would like for MTSU to remain out of the research arena,” Cheatham says. “That’s not President McPhee’s position. It’s not the position of the provost or of the vice provost for research. And it’s not been my position.”

“And that’s what this will be,” says Altman, whose activity in research, patent development, and tech transfer at the University of Georgia was prolific. “This will be a facility that anyone who wants to engage in research, whether they be undergraduate, master’s or Ph.D. students, will have the facilities to do so.”

It’s easy to see how luring of top-flight students, faculty, and administrators to MTSU will yield long-term benefits, especially considering the potential decades-spanning relevance of university research. But thanks to state funding formulas, the new science building will have a positive impact on the University’s bottom line well before that first “Eureka!” moment takes place in one of its laboratories.

One key component of the new funding formula for higher education in Tennessee passed by the legislature in 2010 ties state funding appropriations to how much outside funding for research an institution cultivates. (Before that change, 80 percent of MTSU’s appropriation was determined by sheer enrollment.)

“This building lets us do research on a par with any other research university,” Cheatham says. “Because you have to convince the funding agencies like the National Institutes of Health and the National Science Foundation and the Department of Energy that your university can do the research. It’s a tough sell right now with our facilities. This will make that better.”

Another crucial factor in attracting external funding is the presence of Ph.D. students on campus to carry out the research. The recent creation of three new science Ph.D. tracks at MTSU, then, could not have come at a better time. (The University just graduated its first science Ph.D. students this past spring.)

“These Ph.D.s. give us a lever to bring in outside money that we didn’t have before,” Cheatham explains. “They are great assets to a proposal that you’re making to one of these agencies for a big research project.”

When considered together, these improvements in MTSU’s research capacity—the new Ph.D. programming, an influx of new student and faculty talent, and the construction of a new facility—represent something much more transformative than “progress.” “This is going to be a real sea change for the University,” Bartel says.

Ideally, this sea change at MTSU may be just the thing to help Tennessee leadership lure some big fish into state waters. Currently, Big Pharma does not have a presence within state borders, this despite the fact that life sciences is one of the fastest growing job segments in the United States, employing more than 1.3 million people (including 26,000 in Tennessee with an average wage of $69,000). Many state policy makers and business leaders think MTSU’s new science facility is just the step needed to address this lack.

“MTSU’s new science facility allows the opportunity to benefit from and contribute to technology transfer between university and industry, and this technology transfer should help fuel job creation and grow new revenue streams,” says Jim Monsor, senior VP of operations for Franklin-based, publicly traded life sciences company BioMimetic Therapeutics Inc. “We should become more focused on our research institutions for the job-creation potential they hold, and a dedicated facility such as this can help stimulate interest among the appropriate stakeholders.”

Altman, who has as much or more experience dealing in tech transfer at a major university as anyone at MTSU, agrees that industry tends to aggregate in areas with academic facilities that can help.

After all, why should a biotech company spend some large sum of money for their own equipment “if they’ve got a large university nearby that has every piece of equipment they could possibly need,” Altman explains. Instead, the company is more likely to seek partnerships with the university.

In a February 2012 speech, Dr. Subra Suresh, director of the National Science Foundation, said, “In today’s changing economic landscape, science and technology are the new frontiers of American prosperity. The nation’s well-being and global competitiveness depend, more than ever before, on the steady stream of new ideas and the highly skilled science, technology, engineering, and mathematical talent.”

Numerous national studies support Suresh’s perspective, concluding that investing in science research and education generates higher returns than other government investments. Here in Tennessee, consider what the U.S. government’s $150 million investment in Oak Ridge National Lab has meant for the state’s economy through the decades.

For these reasons, state Sen. Jim Tracy, who represents MTSU on Capitol Hill and who chairs the STEM legislative caucus, considers the investment in a new science facility at MTSU money well spent.

“The number-one thing we are here to do in the legislature is create an environment where business and industry can flourish and bring jobs to the area,” he says. “This is a public investment in the high-reward realm of science.”

Thanks to the work of Tracy, McPhee, and many others (see sidebar titled “Path to Progress”), the new science building stands to become the portal by which MTSU enters this realm—and competes for the rewards—for the first time in decades.

Has it been a long time coming? Definitely. But now, as the University’s fetters are being removed, it’s just time to get to work. There’s a lot of science to be done. MTSU