Alum Jeffery Reid extends a helping hand to current students and recent grads with an eye on his industry. 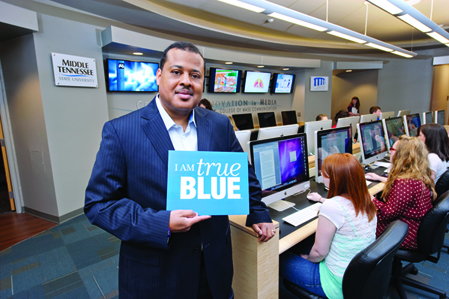 CNN Producer and MTSU Alumnus Jeffery Reid in the new Center for Innovation and Media in the Mass Comm Building.

When Jeffery Reid (’81) ventured to MTSU from the small, rural town of Whitwell, Tenn., he never imagined he’d be an executive producer at CNN. In fact, a career in television wasn’t even on his radar.

“I always enjoyed watching television, and I always wondered how they put a newscast together,” Reid says. “I just never really thought I’d be doing it one day.”

But when a junior-year course in radio production gave him the opportunity to work at the campus radio station, he discovered a passion for broadcast journalism. By his senior year, he’d decided to pursue the more lucrative television route, and after sending 100 résumés to small television markets around the country, he got a bite at a station in Chattanooga. He accepted a paid internship that eventually led to a full-time news producer position there, and with his foot in the door, he worked his way from Chattanooga to stations in Indianapolis and Atlanta and, finally, to CNN in 1996, where Reid oversaw editorial content for the network’s long-form programming, including CNN Presents and CNN: Special Investigations Unit. Faced with are structuring in the CNN department he managed, the MTSU grad recently took a new job with Gannett-owned WXIA in Atlanta leading special projects for the station. At press time, Reid was preparing coverage of the upcoming summer Olympics in London.

In short, he’s the epitome of a College of Mass Communication success story, and he’d like nothing more than to see others from MTSU follow in his footsteps. “I’m doing everything I can to help prepare students for a very competitive field,” Reid says.

For starters, he’s one of nine cornerstone donors who contributed a minimum of $10,000 to the new Center for Innovation in Media—the state-of-the-art facility that houses the University’s student media outlets under one roof. Mass Comm officials hope the center, which opened in January, will encourage collaboration and give students the opportunity to build a working knowledge of multiple media disciplines.

When Reid heard the center was in the works, he “knew immediately” that he needed to support it.

“The more hands-on experience kids have in college, the better job applicants they are going to be,” Reid says. “They have to have more than a college degree in their hands. They’ve got to have a résumé of skills. It’s not so much, ‘Here is what I have learned’ as ‘Here is what I’ve done.’”

When it comes to helping MTSU students get that hands-on experience, Reid does more than pull out his checkbook. Through College of Mass Communication dean Roy Moore and Development Director Kippy Todd, Reid encourages students to apply for media internships and even offers to serve as a reference. Just last summer, Haley Ellis, then an MTSU senior, received one of CNN’s coveted internships, beating out more than 100 applicants for a spot in Reid’s special investigations and documentaries unit.

Though Reid makes it clear that Ellis won the internship on her own merits, he’s also the first to admit that who you know can open doors in his business and others.

“Contacts may not be able to get you the job or keep you there, but at least they can help you get your foot in the door,” he says.

For Ellis, it was an honor to be able to introduce herself to Reid at a College of Mass Communication event and to thank him for giving her the opportunity to apply for the CNN internship. Reid was accessible then, and he became even more accessible once Ellis arrived at her new job.

“His door was always open,” she says. “I felt free to stop in and say, ‘Hey, how’s your day going,’ and he took me to lunch a couple of times.”

She graduated in December, and though she’s still on the hunt for a job, she can’t say enough about having Reid in her corner.

“We’ve emailed multiple times since I graduated,” says Ellis, adding that when she emails Reid, she knows she’ll hear back within the hour.

Reid says he’s happy to talk to students and graduates looking for advice on breaking into or advancing in the field of television news. Throughout his career, he moved successfully from station to station by keeping in touch with colleagues who made the jump before he did, but he says he also could have benefited from a mentor.

“As I look back on my career, maybe it wasn’t smart to stay in Indianapolis for nine years,” he says. “If I’d had a mentor-type person that I could call and bounce some ideas off of, maybe I wouldn’t have stayed as long.”

He keeps in touch with the College of Mass Communication; he’s on campus frequently; and he’s always just a phone call away. The bottom line is that Reid feels obligated to reach out and help others at the institution that introduced him to his field and started him down a successful career path. And he thinks other MTSU alums should do the same.

“You should give money, too, but I know how difficult it is these days. The economy isn’t like it used to be,” he says, adding that he has a daughter in college and twins (a son and daughter) who’ll be heading to college next year. “To take care of them and still give back to the University is going to be tight, but I’ll do it as long as I can, and if for some reason I’m not able to keep on giving, then at least I can give my time and my knowledge.”

As Ellis and other graduates trying to get into the highly competitive field can attest, time and knowledge from a broadcast journalist with 30 years of experience are valuable and welcome contributions. And there’s no doubt that graduates seeking jobs in other industries would be more than thrilled to have the ear of a fellow Blue Raider already in the business. MTSU