Alex Hubbard and Lark are budding members of the Fourth Estate 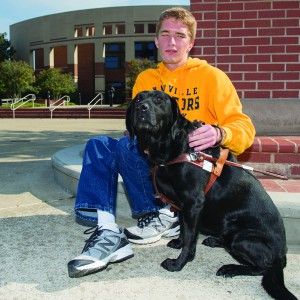 On the campus of the largest undergraduate university in Tennessee, faces often go unnamed in the shuffle to make it to classes on time; but those faces do not go completely unnoticed. Alex Hubbard, whom many may have noticed rushing around campus, phone in hand and seeing-eye dog in tow, has become one of those faces frequently seen but not always known. That may change if Hubbard’s journalism career keeps growing.

Hubbard, 22, is news editor for the student-run newspaper, Sidelines. He was born with some vision in his left eye but none in his right. He lost his existing sight before he was old enough to have the percentage of vision measured.

Now, Hubbard is only able to see the sun and major differences in lighting. But that doesn’t slow him down. As he juggles classwork and daily interviews for the paper, he often appears in as much a hurry as the dog named Lark who guides him around campus safely.

“Lark is everything to me. She knows that I’m a total spaz,” Hubbard says, laughing and reaching to pat Lark’s head. “I’m walking across the street. I’m on the phone. I’m sending an email. I’m doing tons of things.”

For instance, Hubbard recently completed a professional assignment for the Associated Press, assisting with election coverage—quite a feat for a budding journalist still in pursuit of a college degree.

But the world isn’t always spinning so fast for Hubbard and Lark. On the day of this interview, the scruffy mix of golden retriever and Labrador crawled under Hubbard’s chair and closed her eyes in the busy campus coffee shop, unexcited by the commotion of students and professors getting coffee before heading to class. Such ease amid the hubbub might be due to the many loud sports events Hubbard has taken Lark to in the past few years during a previous stint as sports editor at Sidelines. That’s in addition to the many Nashville Predators games he and his family have attended. Not unlike on campus, Hubbard is a highly recognizable figure for many fans at Preds home games in Bridgestone Arena.

Hubbard has attended nearly every home game in the last decade. As a result, he became acquainted with Terry Crisp and Pete Weber, the voices of the Nashville Predators. At first, Hubbard and Weber bonded over their mutual love of sports, but eventually a change in seats put Hubbard about six feet from Weber and led to a more mentor-like relationship. Weber’s love for Lark also kept Hubbard visiting.

“When I began getting into the newspaper business, especially sports writing, I showed Pete a lot of what I was doing,” Hubbard says. “I think he was really impressed with it!”

Hubbard, a senior Mass Comm major ( Journalism) with minors in political science and history, concedes that MTSU is a leader in universities that provide services for blind students, but he says his goal is to use those services as little as possible.

“As a matter of my own philosophy, I want to do as much as I can of my own volition,” Hubbard says, adding that journalism as a profession is not particularly subject to adaptation, and he believes finding a way to perform tasks without alteration will be absolutely necessary.

He insists he never thought he would be a writer, but that his mom played a big part in introducing him to newspapers. She read the paper to him from the time he was five or six years old, he says, “Whether I wanted to hear it or not.”

“But I knew that if I wanted to get out of the trap that most blind people find themselves in—unemployed or underemployed—I needed to learn how to write,” Hubbard says.

While he fields many questions about how he performs his work, it is not as complicated as one might think. He uses nearly the same process as any other writer: a computer, Microsoft Word, and a program that reads the text back to him.

“There is only one way to success, and that is hard work with no shortcuts,” Hubbard says. “It’s not always pretty, and isn’t always idealistic. That has nothing to do with me; it is that way for everybody. Maybe we can’t control our lives, but we can control what our lives will be about.”