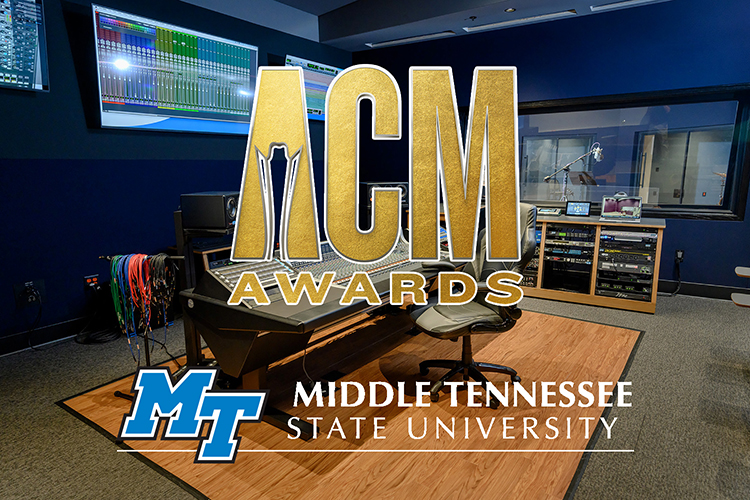 A veteran music producer and a swiftly rising songwriter and performer are making shelf space for their new Academy of Country Music Awards after a live-streamed evening from Las Vegas saw plenty of representation for Middle Tennessee State University.

Department of Recording Industry alumnus Michael Knox is dusting off his new hat trophy for producing the ACM single of the year, the Jason Aldean and Carrie Underwood duet “If I Didn’t Love You.”

And Commercial Songwriting Program grad Hardy, who was also up for the best new artist trophy for a second time, walked off stage as the ACM’s songwriter of the year — a win from his third consecutive nomination for the honor.

Young’s same-titled album was nominated as album of the year, and he also received nominations for producing the music event, single and album.

During the show, Young teamed up with a new famous friend, 2012 MTSU commercial songwriting grad Mitchell Tenpenny, to premiere their new co-written song, “At the End of a Bar.” 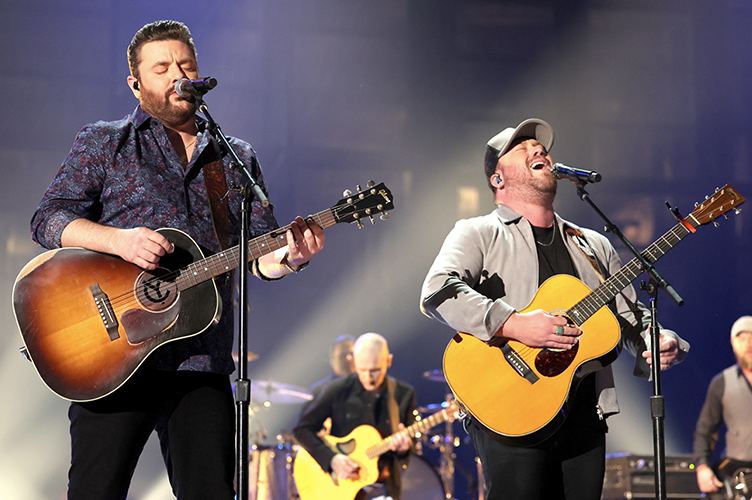 Chris Young, left, and Mitchell Tenpenny perform during the 57th Academy of Country Music Awards at Allegiant Stadium March 7 in Las Vegas. Young, a former MTSU student who led this year’s nominations with seven for his “Famous Friends” project, teamed up with commercial songwriting graduate Tenpenny for the new duet they performed, “At the End of a Bar.” (photo by Rich Fury/Getty Images, courtesy of the Academy of Country Music)

Like her 2021 awards show appearances, MTSU School of Journalism and Strategic Media alumna Brittney Spencer knocked the audience out of their seats with a powerhouse performance.

This time the 2017 public relations grad joined the Brothers Osborne to close the ACMs with a rollicking update of the Nancy Sinatra classic “These Boots Are Made For Walkin’.” 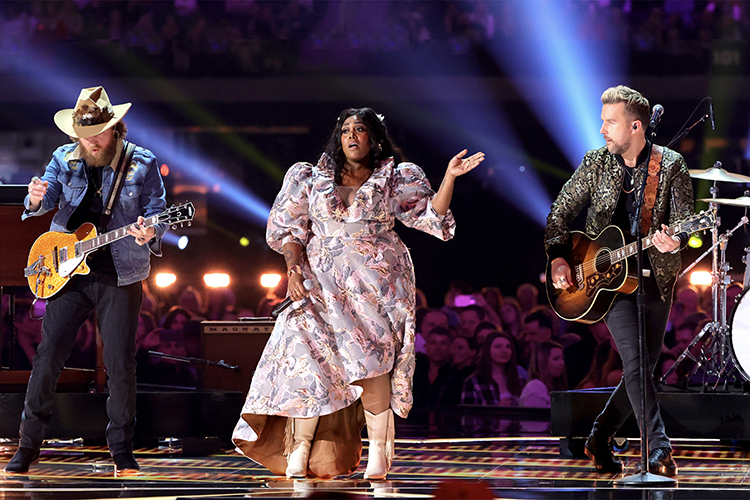 Former MTSU student and scholarship creator Hillary Scott and her Lady A bandmates also returned to the ACMs March 7 to acknowledge yet another group of the year nomination.

The trio, which includes Dave Haywood and Charles Kelley, was honored for their philanthropic work last summer with the ACM’s Gary Haber Lifting Lives Award. 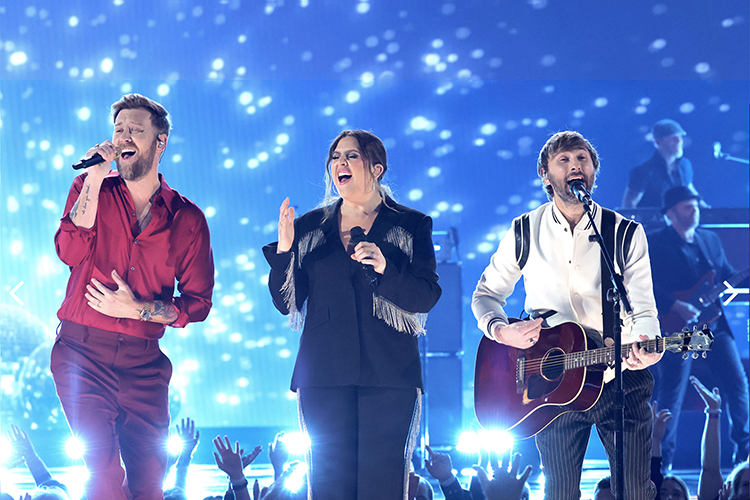 Knox, a repeat ACM producer of the year nominee, has worked with a roster of top artists but is best known for his production work with country superstar Aldean. The singer and producer shared the 2011 CMA Award for album of the year for “My Kinda Party” and the ACM’s 2012 single and vocal event of the year awards for Aldean’s No. 1 duet with Kelly Clarkson, “Don’t You Wanna Stay.”

The 2001 MTSU graduate has produced 26 No. 1 career singles so far for Aldean, including the Clarkson duet and the new ACM-winning single with Underwood that’s also Grammy-nominated. The Alden-Underwood duet also received a music event of the year nomination — and another producer nomination for Knox — at this year’s awards. 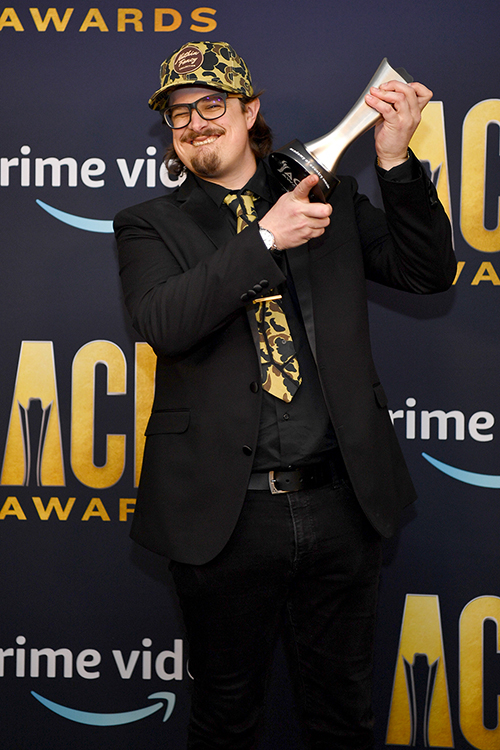 He is a member of the “Wall of Fame” in MTSU’s College of Media and Entertainment, which has recognized successful alumni annually since 2000.

Michael Hardy, who uses only his last name professionally, earned his MTSU degree in 2013 and quickly became a No. 1 songwriter, then added a recording deal in 2018 to his resume.

MTSU Audio Production Program grad Jason A. Hall received his second consecutive nomination in February as the ACM’s audio engineer of the year. The winner of that award, Jim Cooley, was announced Aug. 24 at the Ryman Auditorium during the ACM Honors.

The event, which is held separately from the annual televised ACM Awards ceremony, recognizes the organization’s special awards, off-camera winners and the studio recording awards, which include the producer and engineer honors.

Hardy also was feted for his songwriter win at the August event, which aired Sept. 13 on the Fox broadcast network and can be streamed now on Hulu.

He was nominated in the same Grammy category again this year for engineering the Brothers Osborne’s “Skeletons” and has received multiple award nominations for his work on releases by Eric Church and Ashley McBryde.

The 64th annual Grammy Awards were held April 3 in Las Vegas; MTSU fielded no wins this year at the event.

MTSU established its internationally recognized Department of Recording Industry in 1973 and presented its first Bachelor of Science degree in 1974.

It offers undergraduate degrees in audio production, commercial songwriting and music business and a graduate program with a Master of Fine Arts in Recording Arts and Technologies degree and an MBA degree with a music business concentration.

The department opened its newly revamped and relocated Studios D and E last fall to expand opportunities for MTSU students to learn their craft in nearly 5,000 square feet of customized, expandable, “world-class” space. The nearly $2 million facilities, located at 1408 E. Main alongside MTSU’s primary entrance with its striking obelisk, have been dubbed “Main Street Studios.”

For more on the Academy of Country Music and its annual awards, including a list of all the latest nominees and winners, visit www.acmcountry.com.