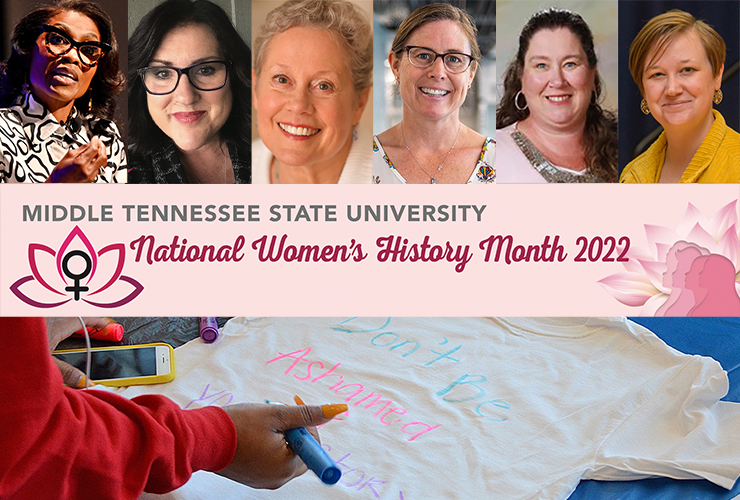 March breezes in at MTSU with a full slate of events celebrating National Women’s History Month and the theme of “Providing Healing, Promoting Hope.”

Elkins’ March 2 talk will be on “Embracing and Advancing, Diversity, Equity, Inclusion and Respect in the Chemical Sciences.” Her science-related March 3 presentation is on “Next Generation Sequencing in DNA Analysis of Historic Period Human Remains.”

• L’Oreal Stephens, a lecturer in communication studies and chair of the MTSU President’s Commission on the Status of Women, will lecture on “SlutWalk Revisited: Looking Back on the SlutWalk Movement a Decade Later” at 3 p.m. Thursday, March 17, in Room 100 of the James Union Building.

The SlutWalk Movement was launched to combat victim blaming in rape cases, particularly criticism of a victim’s clothing or personal appearance in response to a police officer’s comment that “women should avoid dressing like sluts” if they want to avoid sexual assault.

• “Festival of Veils,” a celebration of the use of veils by women in Islam, Catholicism and Judaism is slated for noon to 4 p.m. Saturday, March 19, on the Student Union Commons. Activities will include bread making, henna art, Arabic calligraphy and an art contest, among others.

The festival is co-sponsored by the June Anderson Center for Women and Nontraditional Students, Intercultural and Diversity Affairs, Religious Studies, Al-Wahda, the Muslim Students Association and the President’s Commission on the Status of Women.

• Works of leading female composers will be performed by the MTSU Wind Ensemble and the MTSU Symphonic Band at a concert scheduled for 7:30 p.m. Thursday, March 24, in the T. Earl Hinton Music Hall of the Wright Music Building.

One of those compositions will be conducted by MTSU alumna Stacy Jernigan, band director at Wilson Central High School in Lebanon and president-elect of the Middle Tennessee School Band and Orchestra Association.

The play is part of “Leading Ladies of Rutherford County History,” a project that honors women who have educated, enlightened and inspired generations of Rutherford Countians. General admission tickets will be made available from The Center for the Arts. Go to http://leadingladiesrutherford.com/playandtickets.html for more information.

For more information on National Women’s History Month events at MTSU, contact Wipfli at 615-898-2193 or meagan.wipfli@mtsu.edu. A complete calendar can be seen at https://mtsu.edu/jac/  or click the image below to access a large pdf version of the calendar. 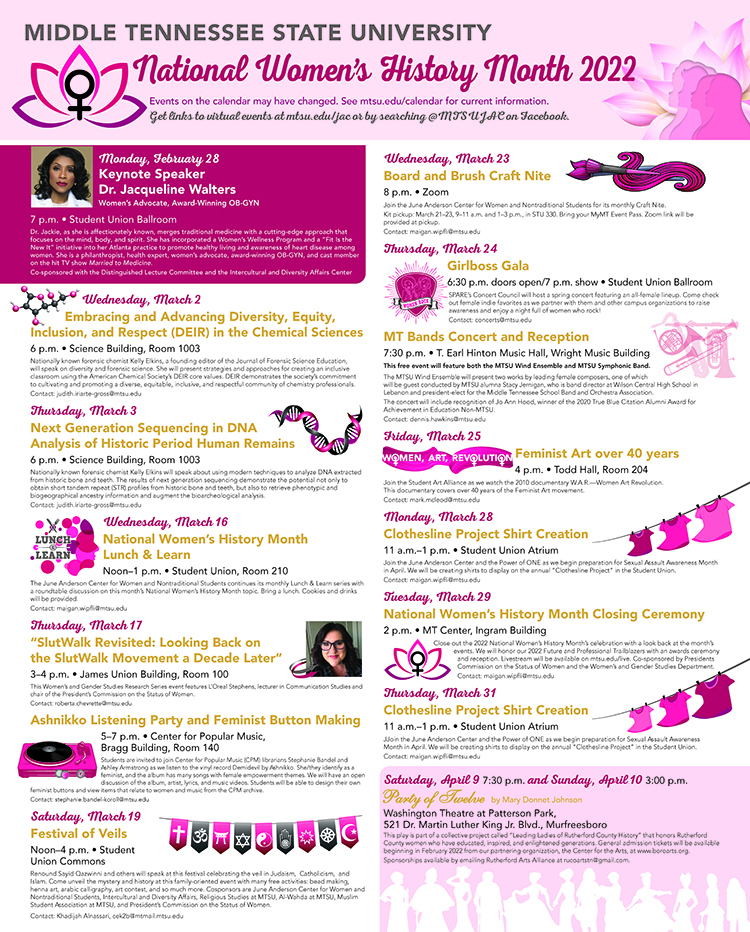