September 'Out of the Blue' ch.. 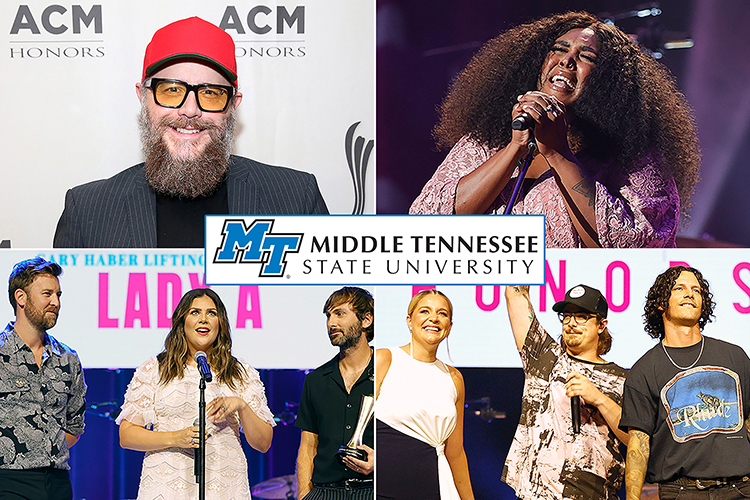 Hard-working College of Media and Entertainment alumni and former students rocked the Ryman and represented Middle Tennessee State University while receiving their own recognition and paying tribute to others at the recent ACM Honors ceremony in the hallowed music hall.

Department of Recording Industry alumnus F. Reid Shippen is now a two-time winner of the Academy of Country Music’s audio engineer of the year award, saluting his nearly three-decade career of chart-topping projects.

School of Journalism and Strategic Media alumna Brittney Spencer nearly blew the balcony down with her rendition of veteran songwriter Gretchen Peters’ classic “Independence Day” in a tribute to the ACM Poet’s Award winner.

Commercial songwriting grad Hardy performed his platinum-selling “One Beer” live with its featured artists to salute his co-writer Hillary Lindsey, winner of the same songwriter of the year award for which he was nominated.

And former student and scholarship creator Hillary Scott and her Lady A bandmates were saluted for their philanthropic work with the ACM’s Gary Haber Lifting Lives Award.

The ACM Honors, which are held separately from the annual televised ACM Awards ceremony, recognize the organization’s special awards, off-camera winners and the industry, songwriter and studio recording awards, including the producer and engineer honors.

The show will be broadcast on Circle TV on Tuesday, Nov. 23, at 7 p.m. Central with an encore presentation at 11 p.m. Central.

The network is available primarily through the digital subchannels of broadcast television stations, including WSMV-TV’s digital channel 4.5 in Nashville, as well as on Peacock, Dish Network, Roku, Xfinity and other TV providers. To find a local channel to watch the ACM Honors on Circle, visit www.circleallaccess.com.

He’s won five Grammys since 2001 and has been a part of six other Grammy-winning projects, as well as multiple ACM and Country Music Award winners, during his career.

He was the ACM’s 2019 audio engineer of the year and has created the sound for gold, platinum and No. 1 hits in multiple genres, too. 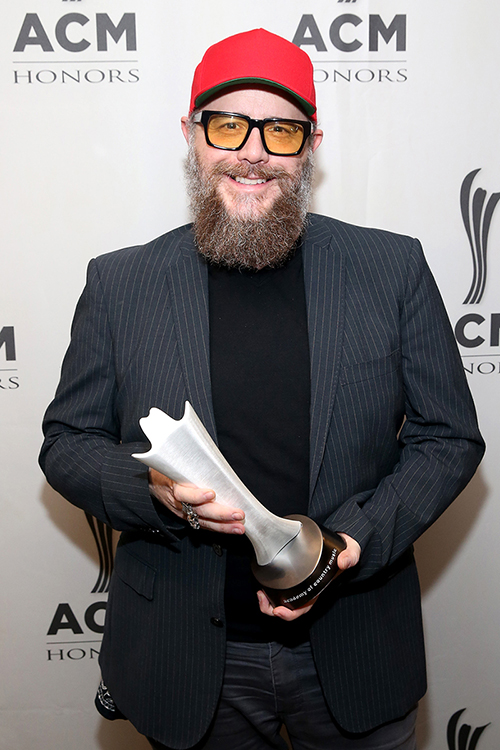 MTSU Department of Recording Industry alumnus F. Reid Shippen, shown in this August 2019 photo with his first Academy of Country Music audio engineer of the year award, also is the winner of the organization’s 2021 top engineering award. Shippen did not attend the Aug. 25 ceremony for the 2021 ACM Honors at the Ryman Auditorium in Nashville; the show will be broadcast on Circle TV on Tuesday, Nov. 23, at 7 p.m. Central with an encore presentation at 11 p.m. Central. (photo by Terry Wyatt/Getty Images for Academy of Country Music)

A member of the college’s Wall of Fame since 2017, his credits range from Kelsea Ballerini and India.Arie to the Backstreet Boys and Robert Randolph and the Family Band.

Shippen has served as co-chair of the National Academy of Recording Arts and Sciences’ Producers & Engineers Wing. He owns and operates Robot Lemon, a private Nashville studio with a unique hybrid analog/digital studio setup. 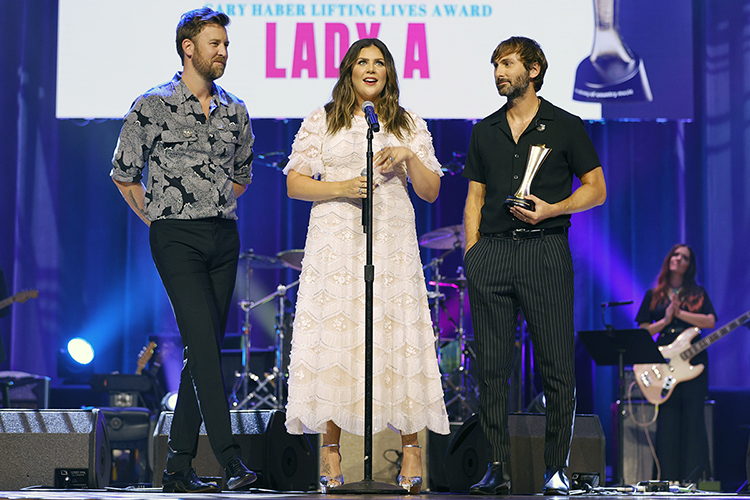 Former MTSU student and scholarship creator Hillary Scott, center, speaks while her bandmates in Lady A, Charles Kelley, left, and Dave Haywood listen while they accept the Academy of Country Music’s Gary Haber Lifting Lives Award for their philanthropic work at the Aug. 25 ceremony for the 14th annual ACM Honors at the Ryman Auditorium in Nashville. (photo by Jason Kempin/Getty Images for Academy of Country Music)

Scott and her bandmates, Dave Haywood and Charles Kelley, were saluted for their “history of consistently participating in ACM Lifting Lives events and fundraisers, at times even assuming hosting duties,” the awards organizers said in a release.

The ACM Lifting Lives Foundation, which selects the winners of the award honoring Haber, its late chairman, is the Academy of Country Music’s philanthropic arm and develops and funds music-related therapy and education programs.

The trio also was nominated for the ACM’s 2021 group of the year and in the event of the year category as part of an ensemble featured on Thomas Rhett’s “Be a Light.”

Lady A began their successful awards-show adventures in 2009, using multiplatinum-selling “I Run to You” and “Need You Now” to launch a winning streak that also earned 1980 MTSU recording industry alumnus L. Clarke Schleicher three engineering Grammys, a fistful of ACM awards and his own two nominations as the ACM’s engineer of the year.

Called Lady Antebellum since its 2006 founding, the group changed its name in June 2020 to remove slavery-related connotations in the wake of Black Lives Matter protests. The group was nominated for the 2020 ACM single of the year for “What If I Never Get Over You.” 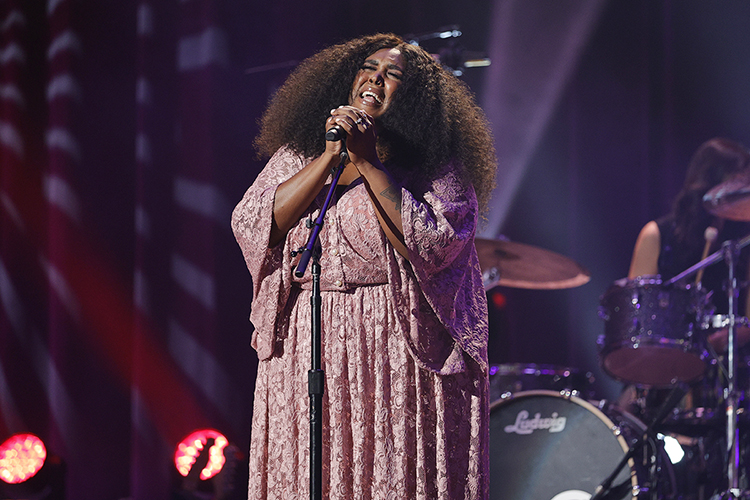 MTSU School of Journalism and Strategic Media alumna Brittney Spencer holds a note while performing veteran songwriter Gretchen Peters’ classic “Independence Day” in a tribute to the Academy of Country Music Poet’s Award winner at the Aug. 25 ceremony for the 14th annual ACM Honors at the Ryman Auditorium in Nashville. (photo by Jason Kempin/Getty Images for Academy of Country Music)

Spencer, a singer-songwriter who’s provided background vocals for artists ranging from Carrie Underwood to Christopher Cross, graduated from MTSU with a public relations degree in 2017.

She released her debut EP last year, earning acclaim for the single “Sober & Skinny” from both Rolling Stone and American Songwriter magazines and praise from fellow artists including Maren Morris and Amanda Shires.

A member of CMT’s Next Women of Country class of 2021 and an Artist to Watch in 2021 on lists compiled by both Spotify and Pandora, Spencer is opening for Jason Isbell & The 400 Unit on their fall 2021 U.S. tour this fall.

The ACMs honored Peters, who’s composed signature hits for Martina McBride, Patty Loveless and others, for her career of “outstanding and longstanding musical and/or lyrical contributions,” along with renowned writers Loretta Lynn and the late Curly Putman. 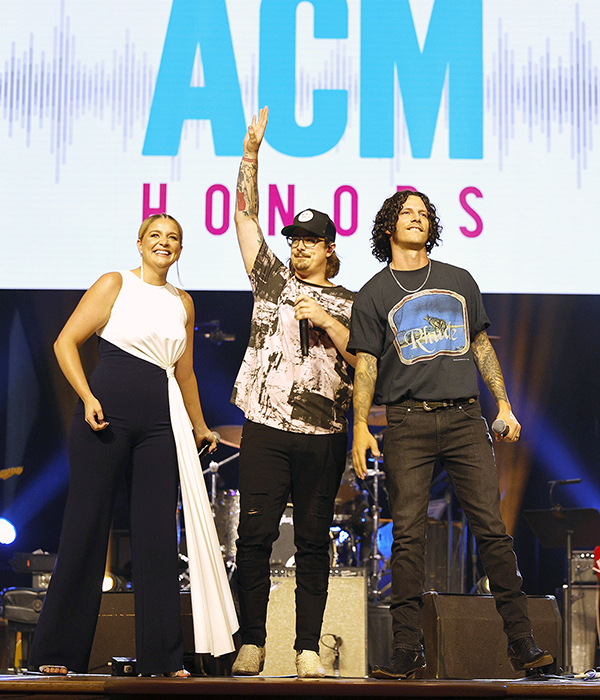 MTSU Department of Recording Industry alumnus Hardy, center, raises his hand to recognize his co-writer, Hillary Lindsey, after performing their platinum-selling “One Beer” with featured artists Lauren Alaina, left, and Devin Dawson Aug. 25 at the 14th annual ACM Honors at the Ryman Auditorium in Nashville. Both Lindsey and Hardy were nominated as the Academy of Country Music’s songwriter of the year. (photo by Jason Kempin/Getty Images for Academy of Country Music)

Michael Hardy, who uses only his last name professionally, earned his degree from MTSU in 2013 and received his first nomination as the ACM’s songwriter of the year in 2020 and his second in 2021. He competed against Lindsey and another of his co-writers, Ashley Gorley, for this year’s honor.

He released his full-length debut CD as an artist last September, resulting in nominations as the ACM’s new male artist of the year and for the music event of the year for “One Beer,” which features Lauren Alaina and Devin Dawson.

Hardy has so far written seven No. 1 songs for other artists in his eight-year professional career, including last year’s ACM single of the year winner and song of the year nominee, “God’s Country,” for Blake Shelton.

Hardy’s debut CD, “A Rock,” was released in September 2020, two years after his first EP, “This Ole Boy.” His songs have so far accumulated more than 668 million career on-demand streams.

MTSU alumni also were nominated in multiple categories for this year’s ACM Honors; a story that includes their details is available here.

MTSU established its Department of Recording Industry in 1973 and presented its first Bachelor of Science degree in 1974. It offers undergraduate degrees in audio production, commercial songwriting and music business and a graduate program with a Master of Fine Arts in Recording Arts and Technologies degree and a new MBA degree with a music business concentration.

The college, which also includes the Department of Media Arts, has a website at https://mtsu.edu/media.

For more on the Academy of Country Music and its annual awards, including a list of all the 2021 nominees and winners, visit www.acmcountry.com.