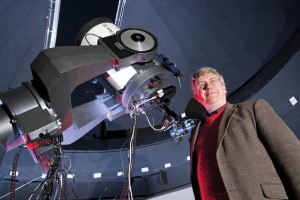 An astrophysicist who studies interacting galaxies and the gravitational force of objects at the edge of our solar system, Dr. John Wallin has a passion for applying the power of computing to astronomy.

The director of MTSU’s new Ph.D. program in Computational Science, Wallin also serves a pivotal role in the study of an online suite of citizen-science projects, called Zooniverse, intended to help determine the implications of public involvement in large-scale scientific activities.

Zooniverse projects range from an effort to track solar explosions to work on understanding how galaxies merge—a Wallin specialty. Essentially, as technology has increased the flow of new information in fields like astronomy, Wallin has embraced the opportunity to use “citizen scientists” to unlock the data.

According to Wallin, the goal is to “build a partnership between machine analysis and human volunteers.” And it’s working. To date, Zooniverse has over a half-million volunteers who have contributed nearly 60 million classifications. Such data is used to help train computers to make the same detailed observations and categorizations.

Citizen science has already led to the development of two new classes of astronomical objects, including the new galaxy classification known as “green peas,” or clusters of stars that resemble fuzzy, bright green spheres.

Wallin spent the 2011 spring semester at Oxford, splitting time between being a visiting scientist in the Department of Astronomy and being a Visiting Fellow at Mansfield College, the nexus of the Zooniverse project. A new project he began work on while there (and later at the University of Minnesota) is the “Ancient Lives” project, created to decode a set of Greek papyri by enlisting volunteers from around the world to help transcribe ancient Greek manuscripts from the Oxyrhincus collection of the Ashmolean Library. These ancient papyri were recovered by British archeologists in the early 1900s and date back to between AD 300 and 700. Since they were recovered, only about 15 percent of the manuscripts have been transcribed.

However, in this collection, papyrologists have found early copies of books of the Bible, ancient Greek plays, and even mathematical texts.

Wallin is involved in creating the analysis software that will be used to help identify these newly transcribed manuscripts. He’s simultaneously working with collaborators (including NASA) on a challenge project to determine how effectively citizen science data can be used to train computers.

Computational Science is a rapidly evolving field. As the design of computers changes and their power increases, new kinds of computer simulations and analyses become possible. That means opportunities abound for MTSU students and faculty as the field of computational science continues to grow. This growth potential has led to the establishment of the Center for Computational Science at MTSU to help promote research on campus in scientific computing. Faculty members in the center will remain in their own departments as teachers but collaborate through the center on their research. The faculty in the center will be working on both scientific simulation and on data-intensive science. 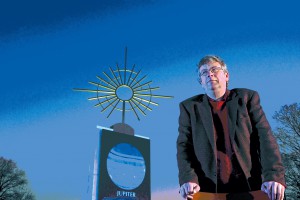 Currently, MTSU has students and faculty working on projects that include automatic identification of tumors using medical imaging; improving the simulation methods used to test new drug design; and “text mining” the scientific literature to find new connections between different areas of research, among others. One of the goals of the program is to form research partnerships with other departments, with local industry, and with government laboratories like Oak Ridge National Laboratory in east Tennessee.

Though the new Computational Science degree may target a different population than the Zooniverse project, both endeavors—and the man in the midst of them—share a common goal: to further scientific knowledge through increased computing efficiency and mastery.