Holding Up Their End

Dr. John Wallin works to hone and harness the computing power of scientists and citizens alike 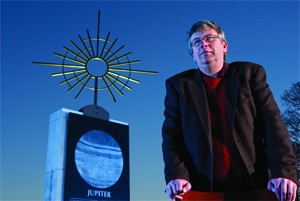 An astrophysicist who studies interacting galaxies and the gravitational force of objects at the edge of our solar system, Dr. John Wallin has a passion for applying the power of computing to astronomy.  As the director of MTSU’s new Ph.D. program in Computational Science, Wallin is eager to explain how his chosen field is so crucial to scientific advancement.

“Across the sciences, computation has become an indispensable bridge between theory and experiments,” he says.  “Complex theoretical calculations are impossible without computer simulations.

The new Ph.D. program administered by the College of Basic and Applied Sciences directly addresses a national priority.  A 2005 report to then-President George W. Bush, authored by the National Coordination Office for Information Technology Research and Development, strongly recommended that universities and the federal government’s R&D agencies make “coordinated, fundamental, structural changes” to affirm the integral role of computational science in addressing the nation’s most important problems, including national security, public health, and economic innovation.

The program also addresses the large demand for computational scientists in Tennessee.  Oak Ridge National Laboratory has some of the most powerful supercomputers in the world and employs hundreds of computational science researchers.  Arnold Engineering Development Center also employs scientists working in this area.

For Wallin, the Computational Science program is part of a much-needed effort to redress a widening gap between valuable too and its users.  “Most science students are never taught how to use a computational tools effectively at either the undergraduate or graduate level,” says Wallin, who spent much of the last decade helping build the computational science Ph.D. program at George Mason University in Virginia.  “The way that science is being practiced has become more and more disconnected from the way it is taught in the classroom,” he adds.  “Unless this disconnect is addressed, we will simply not have scientists who have the tools they need to solve the complex problems we are facing across the science disciplines.”

As much as Wallin works to increase the training and skill of today’s and tomorrow’s scientists, he’s no abstracted, lab-coated elitist.  Wallin serves a pivotal role in the study of an online suite of citizen-science projects called Zooniverse to determine the implications of public involvement in large-scale scientific activities.  Zooniverse projects range from an effort to track solar explosions to an effort to understand how galaxies merge -a Wallin speciality.  Essentially, as technology has increased the flow of new information in fields like astronomy, Wallin has embraced the opportunity to use “citizen scientists” to unlock the data.

According to Wallin, the goal is to “build a partnership between machine analysis and human volunteers.” And it’s working. To date, Zooniverse has over a half million volunteers who have contributed to nearly 60 million classifications.  Such data is used to help train computers to make the same detailed observations and categorizations.  Citizen science has in fact already led to the development of two new classes of astronomical objects, including the new galaxy classification known as “green peas,” or clusters of stars that resemble fuzzy, bright green spheres.

Though the new Computational Science degree may target a different population than the Zooniverse project, both endeavors -and the man in the midst of them- share a common goal: to further scientific knowledge through increased computing efficiency and mastery. MTSU