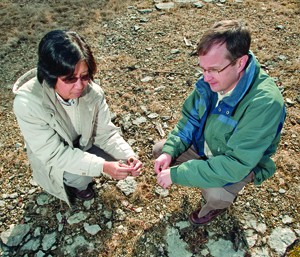 Outside garden clubs and co-ops, seeds probably don’t figure in the daily discussion of the average person.  Yet, after water and oxygen, seeds are about as crucial to human life as it gets.  One need look no further than the so-called “Doomsday” seed vault located int eh Norwegian tundra -a repository for the world’s food sources should man, or outside forces, one day need to resow the planet -to see how serious a matter seed preservation can be.

Still, storing a seed does little good if one does not know how to make it germinate.  That’s where MTSU’s own seed experts -Drs. Jeffrey Walck and Siti Hidayati- come in.  The husband-wife duo of plant ecologists study see germination and have cracked the mysteries of hard-to-germinate species around the world.

The pair recently returned to MTSU after a two-year sabbatical working in Australia as part of a collaborative partnership among Kings Park and Botanic Garden in Perth, the University of Western Australia’s School of Plant Biology, and the Millenium Seed Bank Project at the Royal Botanic Gardens. (Dramatically named Norwegian seed vaults notwithstanding, t his latter project is the world’s largest seed conservation initiative for safeguarding plants against extinction.)  While in the Land of Oz, the couple cracked the mystery of germination in Guinea flowers -dominant shrubs in temperate Australia- and also worked on several plants important for mining restoration.

“[Australians] have large mining operations, so they have to reclaim the land but couldn’t get the seeds of native species to germinate,” Walck explains.  “That was very big for them from both an academic and industrial standpoint.”

Success unlocking Australia’s seed mysteries garnered attention elsewhere around the globe.  Taiwan and South Korea each have the couple working to unlock their own see germination mysteries.  It’s also led to greater notice in the global science community.  Based on additional efforts in Australia reviewing the effects of global climate change on plant regeneration from seeds.  Walck recently coauthored and published an opinion article in Nature, one of the world’s most prestigious scientific journals, titled “Time to Future-proof Plants in Storage.”

While the couple’s global seed germination studies continue to percolate in incubators lining the halls of the Davis Science Building on MTSU’s campus, the pair is turning their attention to a problem closer to home -the preservation and restoration of middle Tennessee’s signature cedar glades.

Cedar glades, where limestone bedrock occurs near or at the surface and make it impossible for trees to grow, are an endangered ecosystem.  Globally unique, they are found primarily in middle Tennessee,  But because of the rapid growth of Metro Nashville and nearby Murfreesboro and Lebanon, many of the cedar glades (an estimated 50%) have been destroyed by development.  Plant communities of high specialized species, many of which are found nowhere else in the world, have been destroyed along the way.

Walck has focused on restoration ecology -or what to do to “fix” a glade that’s been disturbed or destroyed.  “Nothing has ever been done on that question,” Walck says.  “We have some glades that have been heavily impacted and could probably be restored, but we lack the basic ecological data needed to do it.”

Though the rest of the world may miss them, Walck and Hidayati’s return to middle Tennessee comes just in time for the cedar glades.