Actors from the London Stage bring Shakespeare to ...

Actors from the London Stage bring Shakespeare to MTSU 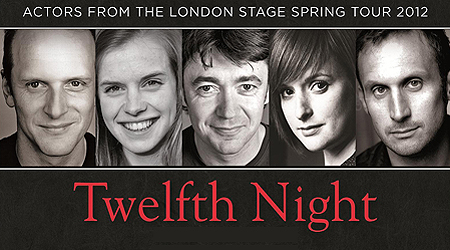 Shipwrecks! Mistaken identities! Plot twists! Cross-dressing! And all of this before midterms?

Yes! MTSU reaped the benefits of Queen Elizabeth I’s midwinter boredom—or so legend has it—Feb. 8-10 with special performances of William Shakespeare’s comedy “Twelfth Night” by a visiting quintet of Actors from the London Stage.

“The performances are full-length, with few or no cuts, calling for virtuosic doubling and tripling of roles by the five troupers,” explained Dr. Kevin Donovan, an MTSU English professor and director of the department’s graduate program.

“As those of us who have attended performances by past AFTLS troupes can testify, this makes for very exciting theater.”

The visit was part of a weeklong educational residency by the AFTLS group, one of the oldest established touring Shakespeare theater companies in the world.

Founded by renowned actor Patrick Stewart and developed by Professor Homer Swander at the University of California-Santa Barbara, AFTLS brings a different five-actor troupe to 16 to 20 different universities each year.

While on campus, the AFTLS members devote a large part of their time to student interaction in classroom workshops, on-stage demonstrations, text readings or informal meetings with students.

Each troupe spends the tour performing a single Shakespeare play at universities, but their vast theater experience also allows them to cover other texts to help students better understand and enjoy the performing arts.

For more information about Actors from the London Stage, visit www.nd.edu/~aftls/at_a_glance. You also can watch a video about the MTSU stop below.