Three of the original sororities to establish chapters on the campus of Middle Tennessee State University celebrated milestones this spring with a series of special events.

The Epsilon Tau Chapter of Alpha Delta Pi, Zeta Theta Chapter of Chi Omega and Delta Pi Chapter of Kappa Delta national sororities brought current members and alumnae together to commemorate their founding and fellowship with sisters old and new.

Here’s a brief recap of the organizations’ events.

Members of the Epsilon Tau chapter of Alpha Delta Pi celebrated the 50th anniversary of their founding through a series of events April 12-13 on and off campus.

Decade Reunions kicked off the weekend of festivities as initiates represented five decades and members gathered for dinner and conversation in various locations. A Diamond Days event raised funds for the Ronald McDonald House Charities, the sorority’s national philanthropy. 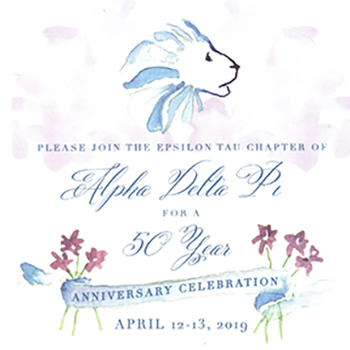 April 13 activities included a campus tour followed by a luncheon at the Alpha Delta Pi House. The afternoon featured a Jewel Degree ceremony, which gave graduating seniors and members who had not previously participated an opportunity to be pinned.

The weekend culminated with a banquet and program featuring remarks by MTSU President Sidney A. McPhee, who praised the sorority’s legacy of strong academic standards, societal engagement and sisterhood. Among the chapter leaders recognized were several of the original Kappa Tau Delta members who petitioned Alpha Delta Pi for the formation of the sorority.

Many of the original 1969 charter initiates were in attendance, including Pam Zimmerman, who has served as a board member of the MTSU Foundation.

Founded on March 1, 1969, Alpha Delta Pi holds the distinction of being the first national sorority on MTSU’s campus. 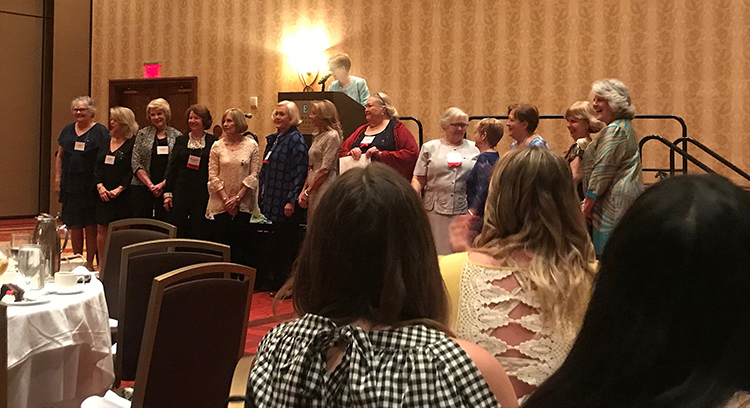 A large group of alumnae and current members of the MTSU Epsilon Tau chapter of Alpha Delta Pi pose for photo at Embassy Suites in Murfreesboro to commemorate the 50th anniversary of its founding. The sorority chapter held a series of events April 12-13 on and off campus to celebrate. (Submitted photo)

The Zeta Theta Chapter of Chi Omega National Sorority celebrated 50 years on the MTSU campus with multiple events April 6 at the Embassy Suites in Murfreesboro.

The celebration began with a brunch at the hotel, where attendees included both alumnae and current members of the Chi Omega chapter at MTSU.

Emily Pentecost Ellis, a member of the 1969 pledge class and a 1972 MTSU graduate, was the keynote speaker at the brunch. Ellis is principal consultant at Education and Training Concepts, a company focused on culture integration, leader development and customer service. She also is a program designer and facilitator for the American Hotel and Lodging Association’s Educational Institute and The Disney Institute. 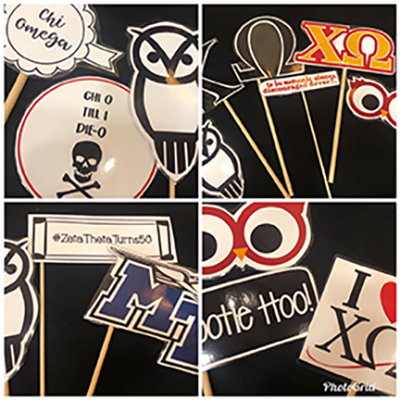 Following the brunch, alumnae enjoyed tours of the Chi Omega house at MTSU. The day culminated with an evening formal at Embassy Suites with an hors d’oeuvres dinner buffet, DJ and dancing. Over 400 attended the celebration’s events.

“This is the culmination of over a year of planning to celebrate the 50th anniversary of the Zeta Theta Chapter of Chi Omega at MTSU,” said Kalyn Catlett, president of the Murfreesboro Chi Omega alumnae.

“We are gathering to celebrate many years of friendships and accomplishments at MTSU. We, as alumnae and collegians, look forward to a continued successful relationship and partnership with MTSU.”

Zeta Theta got its start at MTSU as Delta Pi Delta, a local organization founded in 1966. After petitioning Chi Omega to organize a chapter at MTSU, it was installed as the Zeta Theta Chapter of Chi Omega in March 1969, initiating more than 1,500 MTSU women since its founding.

Chi Omega’s national philanthropy is the Make-A-Wish Foundation. Through volunteering and fundraisers, Zeta Theta has donated 9,800 hours and more than $112,000 to the organization. 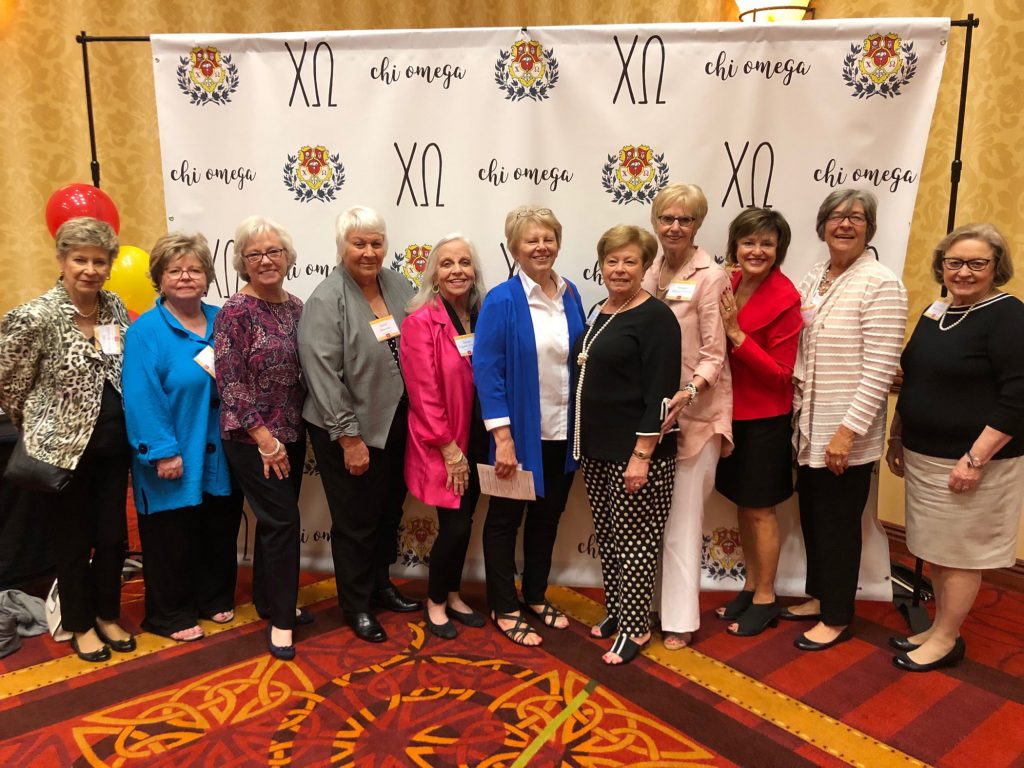 Some of the 1969 charter and pledges alumnae from the Zeta Theta Chapter of Chi Omega National Sorority pose for a photo during their 50th anniversary celebration held April 6 at the Embassy Suites in Murfreesboro. (Submitted photo)

A large group of alumnae and current members of the Zeta Theta Chapter of Chi Omega National Sorority pose for a photo during their 50th anniversary celebration held April 6 at the Embassy Suites in Murfreesboro. (Submitted photo)

The Delta Pi Chapter of Kappa Delta National Sorority celebrated 50 years on the MTSU campus with multiple events May 31-June 2 at The View at the Fountains and the Kappa Delta house on MTSU’s campus.

The weekend celebration began with a date party May 31 at the View at the Fountains, where alumnae and current members brought their significant others for a night of dancing and reminiscing.

On Saturday, June 1, the current chapter hosted brunch and house tours at the chapter house on Greek Row, where members were able to view the new house and catch up with their sisters. On Saturday evening, the 50th Anniversary Banquet for Kappa Deltas.

More than 250 Kappa Deltas were in attendance to celebrate 50 years at MTSU. Tables with scrapbooks from the past and original composites highlighted the evening.

Merritt challenged the women to take time to recognize the sisters who have affected their lives through their membership in Kappa Delta. She recognized the chapter’s recent accomplishments and highlighted the bonds of sisterhood they all share.

“We had an amazing weekend of events to commemorate our chapter’s 50th anniversary,” Kappa Delta chapter adviser Beth Brasch said of the anniversary weekend. “From founding members to current collegians, it was wonderful to celebrate our sisterhood together.”

Kappa Delta Sorority is a national organization for women with more than 271,000 members, 168 active collegiate chapters and 224 active alumnae chapters nationwide. It is active in a number of philanthropic endeavors, including its work with its national philanthropies, the Girl Scouts of the USA and Prevent Child Abuse America. 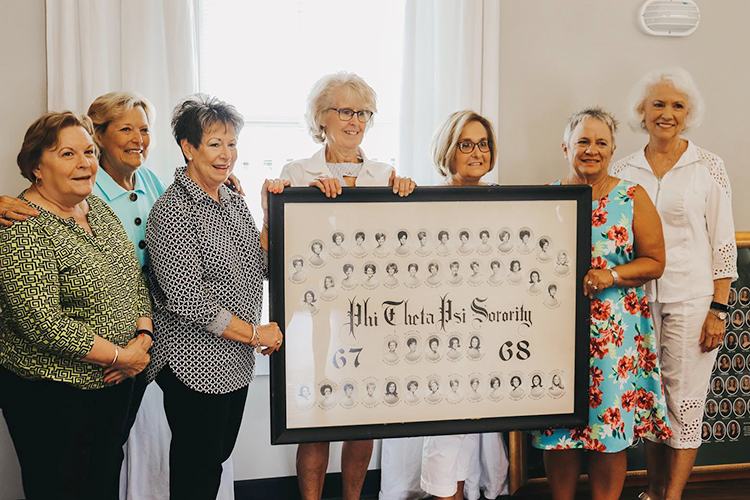