How A Dance Study Abroad Trip ..

From 1960 to the present, the MTSU Alumni Association has recognized accomplished alumni with the association’s highest honor: the Distinguished Alumni Award.

This year’s recipient is Jeremy Cowart of Franklin, Tennessee, an internationally acclaimed photographer and entrepreneur. 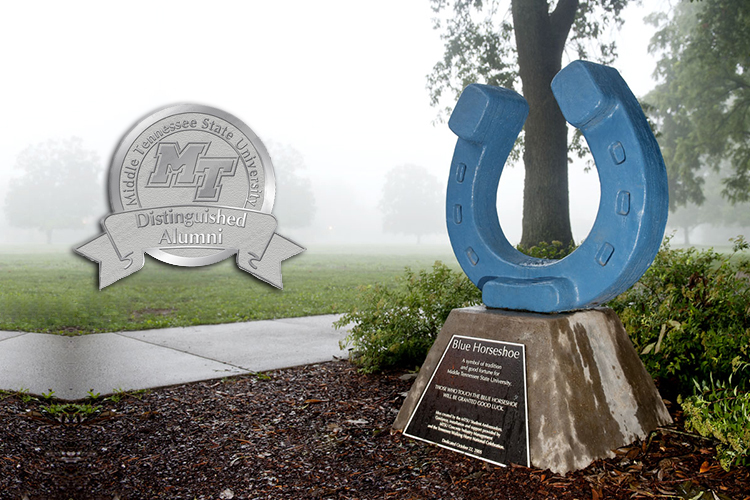 This year’s Young Alumni Achievement Award, given to a graduate age 35 or younger who is making a positive impact in the world, goes to Aaron Shew, a Murfreesboro native now working at Arkansas State University in Jonesboro, who has spent more than a decade working in international development and agribusiness.

For the sixth consecutive year, True Blue Citations of Distinction are being awarded. Categories and this year’s honorees include:

• Achievement in Education (MTSU faculty) — Carroll Van West of Murfreesboro, who is director of the MTSU Center for Historic Preservation, a professor of history, the Tennessee State Historian since 2013, and an author of numerous books.

• Achievement in Education (non-MTSU faculty) — G. Edward Hughes of Union, Kentucky, who retired in 2015 after 42 years as a higher education teacher and administrator in Tennessee, Illinois, Arkansas, New York and Kentucky.

• Service to Community —Meagan Flippin of Murfreesboro, president and CEO of the United Way of Rutherford and Cannon Counties since 2013 and president of Rutherford CABLE.

The awards will be presented at the Distinguished Alumni Awards Reception, which will be held during Homecoming Week at 4 p.m. Friday, Oct. 25, in the Sam H. Ingram Building, 2269 Middle Tennessee Blvd.

The public is invited to the reception. It is a free event, but organizers are asking attendees to RSVP to plan for food and space. To register, RSVP to alumni@mtsu.edu.To find parking at the Ingram Building, visit http://tinyurl.com/MTParkingMap for a printable campus map.

Named the “Most Influential Photographer on the Internet” by Huffington Post, Forbes and Yahoo in 2014, Cowart is an award-winning photographer, artist and entrepreneur whose mission in life is to use his creative platform to inspire and help others. Cowart has published four books and is a sought-after speaker, presenting multiple TEDx talks, showcasing his “Voices of Haiti” photo essay at a United Nations gathering, and addressing creative conferences across the country.

His latest endeavor is The Purpose Hotel, a planned global for-profit hotel chain designed to fuel the work of not-for-profit organizations. His first hotel is scheduled to open in downtown Nashville in 2022. He’s the founder of a global photography movement, Help-Portrait, a mobile social networking app called OKDOTHIS, and an online teaching platform, See University. The story of all of these projects is told in his latest book, “I’m Possible: Jumping into Fear and Discovering a Life of Purpose.”

With newfound questions and an expanded worldview, Shew pursued a graduate education, completing master’s degrees in geography and agricultural economics and ultimately a doctorate in environmental dynamics from the University of Arkansas. In 2018, he received the Young Scientists Award from the International Rice Research Institute at the Fifth International Rice Congress. He has authored more than 10 peer-reviewed scientific articles and presented results at more than 20 international conferences.

In January, Shew was appointed the inaugural REL Wilson Chair of Agricultural Economics at Arkansas State University, where he is launching a new Master’s of Agricultural Business, or MAB, degree focused on training the next generation of agribusiness production and food marketing experts.

West’s role at the Center for Historic Preservation, where he has worked since 1985, brings the responsibilities of directing the Tennessee Civil War National Heritage Area, serving as the editor-in-chief of The Tennessee Encyclopedia of History and Culture, and serving as director of the center’s Teaching with Primary Sources Across Tennessee, a Library of Congress program. As a history professor, West teaches courses in historic preservation, American architectural history, American material culture studies and state and local history.

West has directed to completion more than 100 master’s degree theses and 30 doctoral dissertations of MTSU graduate students, who work at universities, agencies and history institutions nationwide. His preservation focus is on properties associated with the Civil Rights Movement, the Civil War, rural areas, marginalized communities and the Southern music industry.

His most recent National Register nominations include RCA’s Studio A in Nashville and co-authored nominations for the FAME Studio in Muscle Shoals, Alabama, and the King Studios (co-authored) in Cincinnati, Ohio. West also has published several books in both Western and Southern history, architecture, material culture and historic preservation; his most recent book is “Nashville Architecture: A Guide to the City.”

He led the regional effort to develop The Challenger Learning Center of Kentucky, the first rural center of its kind and only one of 42 worldwide located in a rural community. At Gateway he led the transformation of three former vocational schools into a fully accredited comprehensive community and technical college with three campuses in Northern Kentucky. His vision and leadership included the development of the Boone campus and its nationally acclaimed Center for Advanced Manufacturing and the Urban Metro Campus.

Hughes has served on numerous state, regional and national boards. He has received many awards for leadership including an honorary doctorate and Distinguished Alumni Award from Catawba College, the Shirley B. Gordon Award of Distinction from Phi Theta Kappa and the 2016 Lifetime Achievement Award from the Northern Kentucky Education Council. He is the author of numerous publications about education and the impact of poverty in higher education.

In retirement, Hughes formed The Hughes Group to connect the innovative ideas of people to organizations and resources, focusing initially in the Greater Cincinnati region to help reduce the impact of poverty and to help move people out of poverty and into self-sufficiency.

SERVICE TO THE COMMUNITY

College of Media and Entertainment and University College

In leading the United Way, Flippin has led a strategic organizational transformation and collaborates with the board of directors and staff to deliver on its mission and vision. Under her leadership, United Way has experienced record annual giving and the launch of an endowment campaign that exceeded initial goals by 500 percent.

The five largest gifts in United Way’s history, and initiatives such as the Young Leaders Society, Catalyst, the Mental Health Action Initiative, the Legacy Society, Volunteer Connect and the Afterschool Network, among others, have all been launched during Flippin’s tenure.

She is a graduate of Leadership Rutherford, Leadership Middle Tennessee, and the Transit Citizen’s Leadership Academy. Flippin serves on the Alpha Delta Pi Foundation Philanthropy Committee, and has earned the Certified Fundraising Executive credential.

Flippin has been recognized by the Center for the Arts with its Change It! award, is a past recipient of the Blue Raider Athletic Association’s “Most Valuable Person” award and the Junior League of Murfreesboro’s Most Outstanding Member award and has been an ATHENA and Nashville Emerging Leader award nominee.