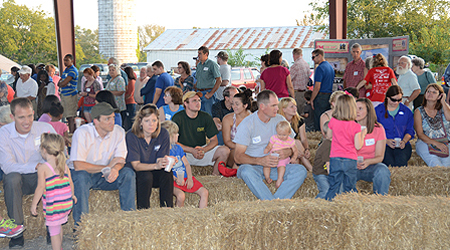 About 350 people attended the annual Ag Field Day at the MTSU Dairy and MTSU Farm in Lascassas on Sept. 27.

Many people — including lots of children — saw the milking process that takes place in the milking parlor. They also toured the rest of the farm, which includes a new dairy calf facility, student garden and nursery, and beehives and apiary, or honey house, and saw how alfalfa has been established on the site.

School of Agribusiness and Agriscience senior Boomer Harris told visitors about the farm’s progress for the past year. Tennessee Department of Agriculture information officer Tom Womack represented Commissioner Julius Johnson, who was unable to attend.

You can read more about the event at mtsunews.com/ag-field-day-2012.

Senior animal science major David Johnson, left, and his twins, Gabrielle and Elijah, 4, visit one of the cows at the MTSU Farm. They attended the annual Ag Field Day, hosted by the School of Agribusiness and Agriscience, Sept. 27 in Lascassas. (MTSU photos by News and Media Relations)

About 125 hay bales made for popular seating arrangement for many of the 350 people who attended the annual Ag Field Day at the MTSU Farm in Lascassas.

Libbie Burks of Murfreesboro pulls the handle on the dispenser to obtain chocolate milk provided by the MTSU milk-processing plant at MTSU’s Ag Field Day Sept. 27. She is the daughter of Brian and Liz Burks.