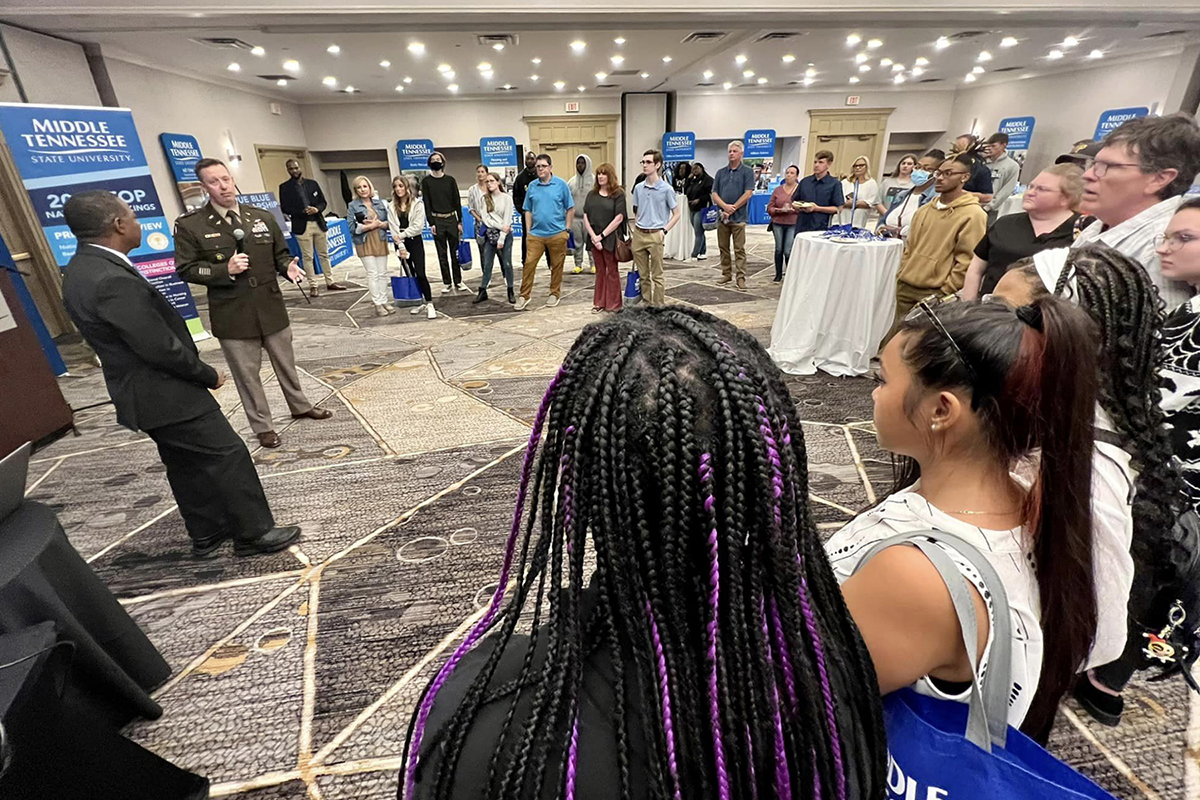 And the same could be said for Brittany Lamprecht, a counselor from Lawrenceburg, Tennessee, and recent MTSU graduate, attending the True Blue Tour event in Huntsville.

Students like Camille Murnane of Birmingham and Graysen Furber of Madison were impressed with MTSU programs they plan to pursue in college.

Stops in Birmingham and Huntsville are part of the 14-city True Blue Tour, as MTSU visits nine Tennessee cities, plus Atlanta, Georgia, and Lexington and Louisville, Kentucky, recruiting students for 2023 and beyond.

MTSU President Sidney A. McPhee awarded a number of prizes and scholarships at both stops.

Murnane, 17, a senior at Oak Mountain High School, plans to pursue a career in forensic science — and MTSU features one of the top programs in that field in the nation.

“It’s important to bring to victims and family members closure,” said Murnane, whose fascination with the field started when she began watching “Forensic Files” with her father, Paul Murnane, when she was about 9 or 10. “I read a lot about forensic science and watched a lot of unsolved mysteries and cold cases.”

Paul Murnane added that “MTSU is her No. 1 choice and the school she’s the most excited about.” Camille Murnane has applied, is waiting for her acceptance letter and has a 3.6 high school GPA.

Furber, 17, a senior at James Clemens High School in Madison, said she “can’t remember not drawing. I doodled in first and second grade. It brings me joy. I want to make people happy.”

That’s why the animation program in the College of Media and Entertainment’s Media Arts Department appeals to her.

On social media, Furber has admired the work of Kasey Golden, who is an MTSU graduate (Graphic Design). As a freelance artist now living in Canada, Golden created her own YouTube channel that has quite a following.

“Every time I visit MTSU it feels like home,” said Furber, who attended the Huntsville tour event with her mother, Amie Furber. “I’m excited about all the things they have to offer.” MTSU was Graysen Furber’s first college visit as a junior and remains at the top of the list.

Lamprecht, who was born and raised in Lawrenceburg, is a college access counselor at Lawrence County High School. She received a $10,000 scholarship from McPhee, at the luncheon and split it in four, $2,500 increments for her students.

At her school, Lambrecht “helps them complete their FAFSA (Free Application for Federal Student Aid), takes them on campus tours and help them move in. … This scholarship for four students gives them an opportunity. This is a lot of money to help students.”

MTSU offers daily campus tours, its final True Blue Preview will be Saturday, Nov. 5, the deadline to apply for guaranteed scholarships for qualifying first-year students is Dec. 1 (Feb. 15, 2023, for qualifying transfers) and the start of the FAFSA process began Oct. 1.

MTSU’s next tour stops will be in Tennessee — at the Carnegie Hotel, 1216 W. State of Franklin Road, at 6 p.m. ET Wednesday, Oct. 19, in Johnson City for a student reception and Thursday, Oct. 20, in Knoxville for a 12:30 p.m. thank-you luncheon for counselors and community college staff and 6 p.m. student reception at the Foundry on the Fair Site, 747 World’s Fair Park Drive. All events are free.

Visit https://mtsu.edu/rsvp for information on all the remaining stops of the tour.