The trio participated in the event organized by the council at the Rutherford County Courthouse on Feb. 1 — the day when girls nationwide could join Scouts BSA, the new name for the program for youth from ages 11 to 17. 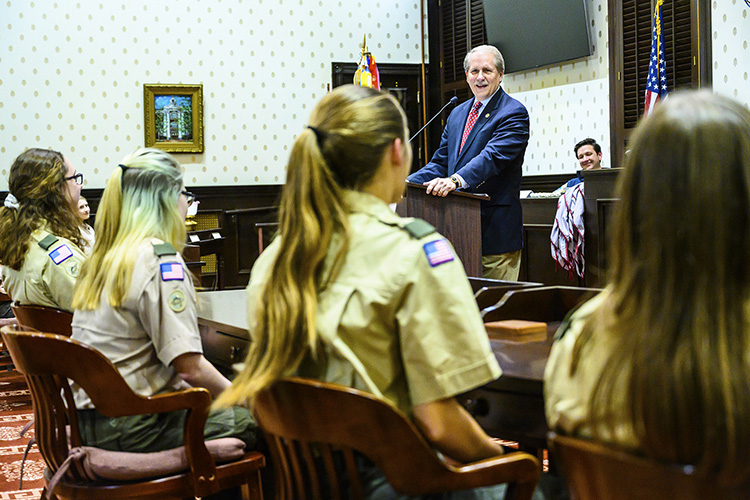 MTSU signed a partnership agreement with the council in March 2018 that allows the university to be a greater resource for Scouting programs, particularly in science and technology.

Huber, MTSU’s senior advisor for veterans and leadership initiatives, led the new scouts in the Pledge of Allegiance and spoke about the significance of the ceremony, saying that the girls, as founding members of Troop 2019, are making history with their commitment to be among the first girls to join Scouts BSA.

Ketron, a member of the council’s executive board, invited troop leaders to hold the ceremony at the historic courthouse. He joined representatives from scout units across the Trail of Tears District, which includes Rutherford County, in congratulating the new members of Scouts BSA. 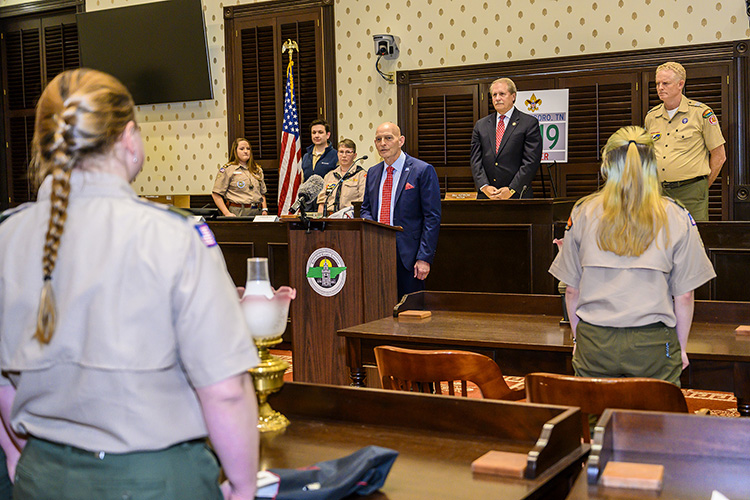 Retired Army Lt. Gen. and Eagle Scout Keith Huber, MTSU’s senior advisor for veterans and leadership initiatives, speaks to scouts in Troop 2019 about the significance of the ceremony establishing their group, saying the girls, as founding members, are making history with their commitment to be among the first girls to join Scouts BSA. (MTSU photo by Eric Sutton)

Baker, who also is a member of the council board and CEO and owner of Sprint Logistics, formally congratulated the girls on behalf of the university. Baker led the new scouts in reading of the Outdoors Code.

Each of the 16 girls signed a charter document that listed them as founding members of the troop. After signing the charter document, each girl received a neckerchief from her parents and a copy of the new Scouts BSA Handbook from Scoutmaster Kevin Phillips.

Although MTSU will provide program support to the troop through its partnership with the council, the men’s ministry of Trinity United Methodist Church in Murfreesboro is the unit’s chartering organization and will provide meeting space and oversee the unit.

MTSU has worked with Boy Scouting since 1920 and, since 1991, has hosted a Merit Badge University on campus, where faculty and staff members help scouts earn badges in a variety of different disciplines. Former MTSU President James E. Walker established the MBU program at the university; it’s a single-day event held on the last Saturday of each February. 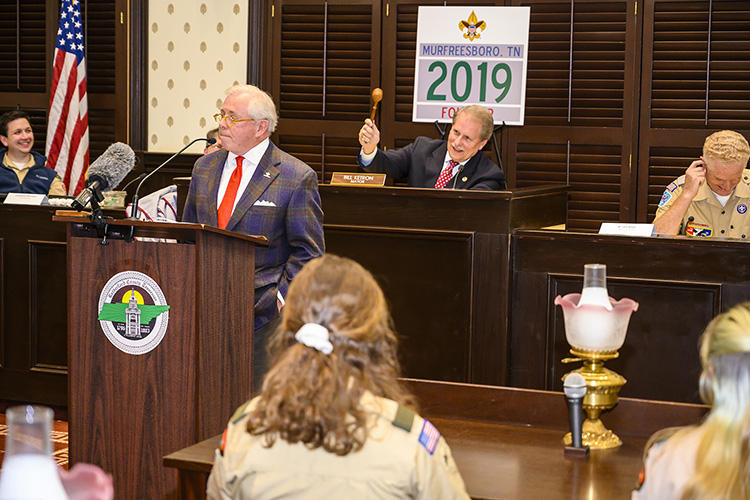 The partnership uses the educational resources of the university’s College of Basic and Applied Sciences to engage Scouts in science and technology pursuits.

The Middle Tennessee Council, Boy Scouts of America, based in Nashville, has more than 19,000 members and has been the fastest growing of 270 nationwide councils in recent years.

MTSU signed a similar partnership with the Tennessee Wing of the Civil Air Patrol’s cadet program in 2014 and renewed it in 2017. Discussions are underway at MTSU for a pact with the Girl Scouts of Middle Tennessee.

“We at MTSU seek out partnerships like these so that we can serve our communities and give promising perspective students a chance to take a closer look at our university,” said President Sidney A. McPhee. 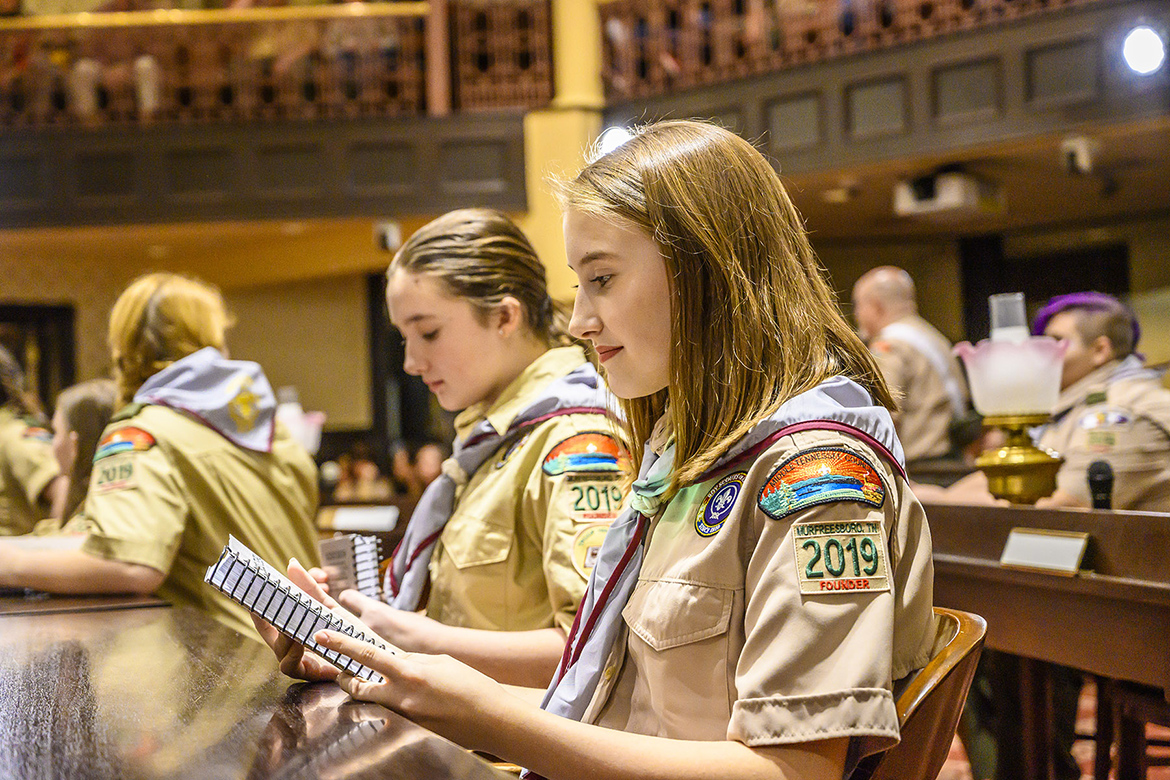 Newly inducted members of Troop 2019 of Scouts BSA examine the handbooks they received as part of their unit’s charter ceremony Feb . 1 at the Rutherford County Courthouse. (MTSU photo by Eric Sutton) 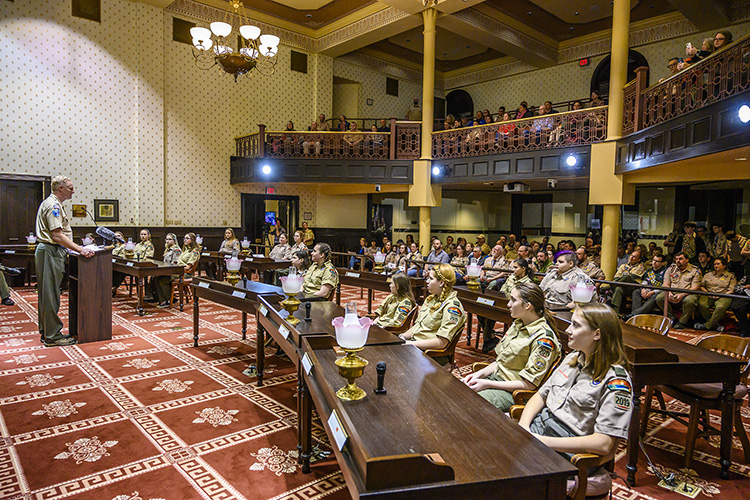 Chief Scout Executive Larry Brown of the Middle Tennessee Council, Boy Scouts of America, left, brings greetings from scouts across the region at the Feb. 1 charter ceremony for new Troop 2019 in the Rutherford County Courthouse. (MTSU photo by Eric Sutton) 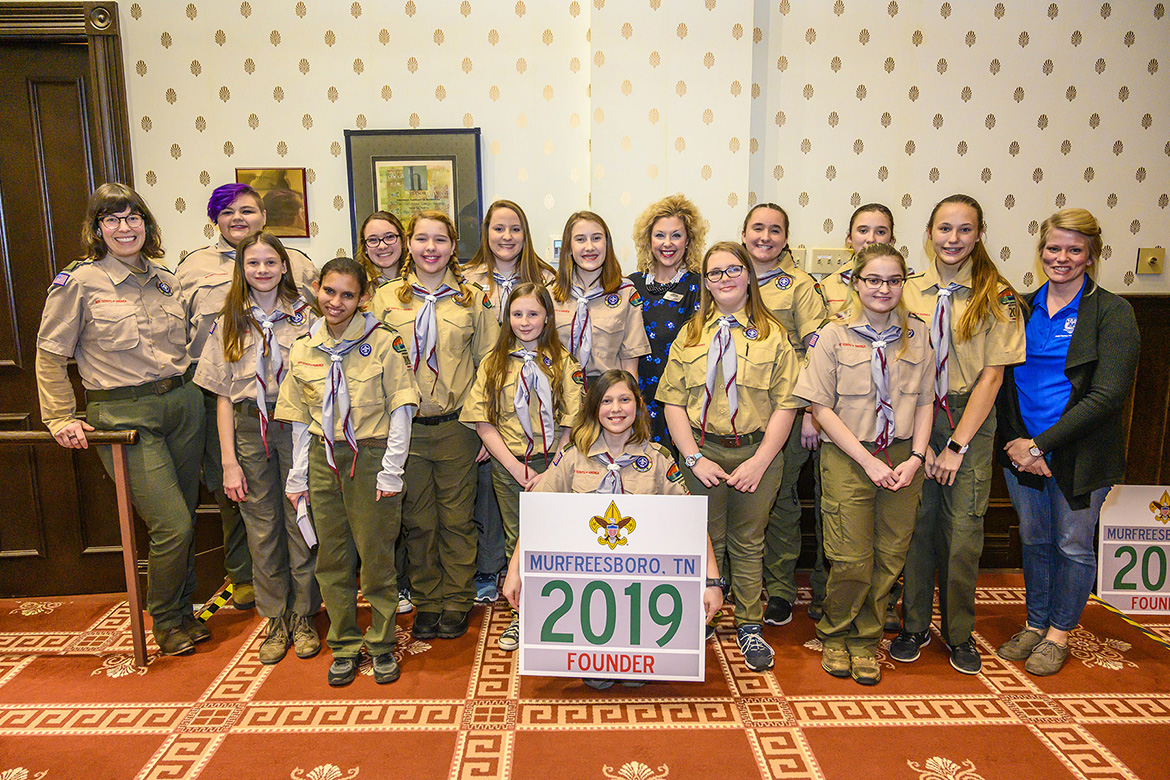 Members of Troop 2019 pose for a group photo after a Feb. 1 charter ceremony in the Rutherford County Courthouse welcoming the new all-girl unit into Scouts BSA. (MTSU photo by Eric Sutton)