Why You Don't Have to Be Nervo.. 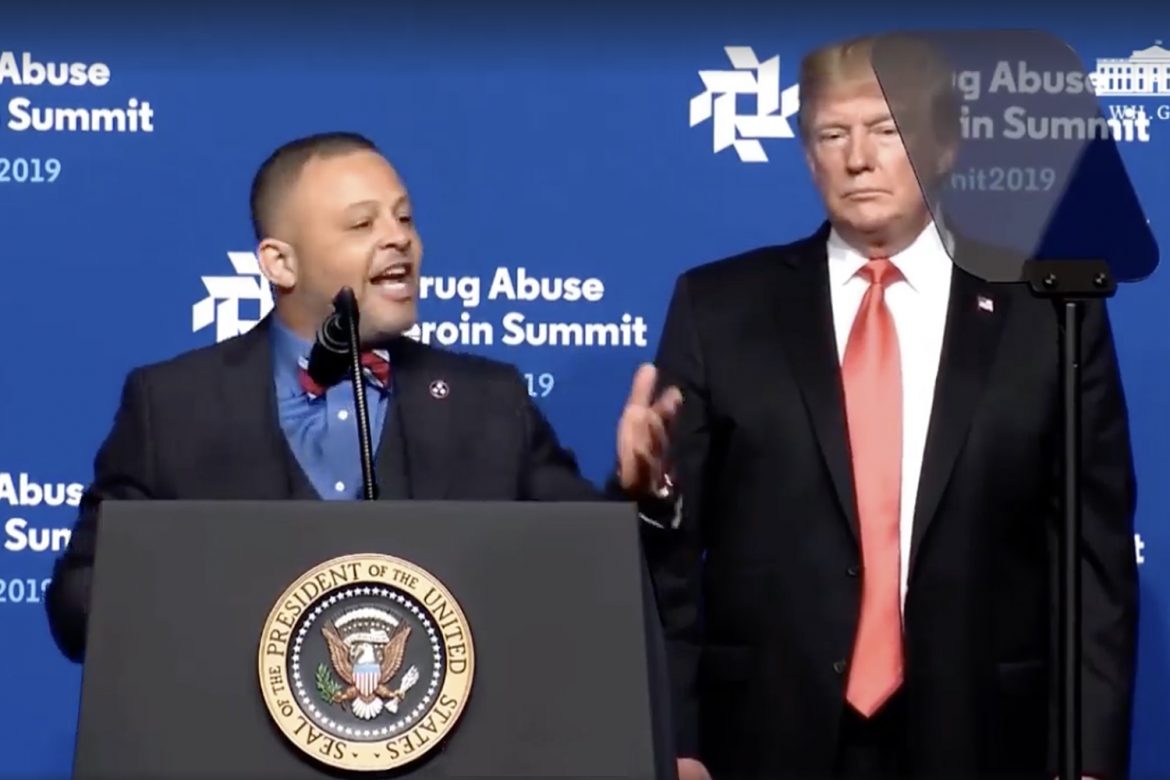 It’s rare when the president of the United States personally invites you to participate in a national symposium.

But there stood Monty Burks, a Middle Tennessee State University alumnus with bachelor’s and master’s degrees in criminal justice administration, at the podium alongside President Donald Trump at the Rx Drug Abuse and Heroin Summit Wednesday, April 24, in Atlanta, Georgia.

Burks, a member of the Classes of 2006 and ’08, is director of Faith-Based Initiatives/Division of Substance Abuse at the Tennessee Department of Mental Health and Substance Abuse Services.

“I was invited because of my work with the Tennessee Department of Mental Health and Substance Abuse Services and my personal story of redemption,” Burks said Tuesday, April 30, after he served as the keynote speaker for the Indiana Minority Health Conference in Indianapolis.

Burks also received a second invitation, this one from the president and First Lady, to attend the National Day of Prayer Thursday (May 2) at The White House in Washington, D.C., and he attended.

The president, who attended the April 24 Atlanta summit with his wife, Melania Trump, introduced Burks. The men’s remarks aired on C-SPAN and are available below.

“Nineteen years ago, Monty turned his life around when two women of prayer from his hometown church helped him to get on a path to recovery,” Trump said, referring to Burks’ mother, Patricia Burks-Jelks, also an MTSU alumna and member of the Class of ’83, and close family friend Robbie Snapp, assistant director of MTSU’s Office of Financial Aid.

Burks’ troubled past included his father’s death in 1997 and his subsequent choice of a “party lifestyle” that included addiction and years of personal and financial problems.

His history also includes being guided by Lance Selva, chair of MTSU’s Department of Criminal Justice Administration, who’s known Burks for about 30 years.

Selva mentored the Winchester, Tennessee, native after Burks came to MTSU with a new lease on life. He’d spent time in criminal justice intervention “and made a success of himself after he came out of drug time,” said Selva, who talked Burks into re-enrolling after going through long-term treatment.

Saying he was “in awe, honored and humbled” by the opportunity to speak at the drug summit, Burks told the attentive audience that “the opposite of addiction is relationship. That simple equation is what helped me find my freedom. Criminal justice intervention led me to treatment, which led me to recover, which put me on this podium.”

Burks added that he’s been “blessed to serve” under Marie Williams, current commissioner for the Department of Mental Health and Substance Abuse Services, and former commissioner Doug Varney. 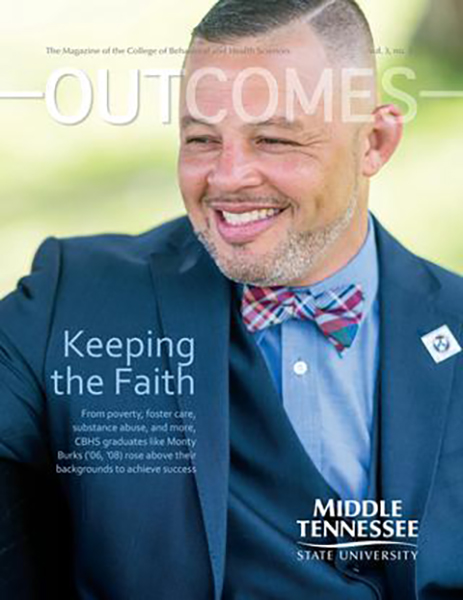 MTSU’s College of Behavioral and Health Sciences magazine, “Outcomes,” features Monty Burks (2006, ’08) on the front cover of its fall 2017 issue.

“You see, recovery is real. We do recover,” he continued, drawing applause from the audience. “To me, the paradigm shifts with the faith community. Our governor, Bill Lee, supports the faith-based community being the catalyst to change, to control the narrative, to explain how people and recovery can come back and be fruitful and change the paradigm themselves, in their own communities.”

“We go back to work not just for a job but for a career, so we can go back and lead as peers, so those who were behind us crying in the wilderness will have a second chance to stand before a podium like this and tell you that, yes, recovery is real. We do recover.”

Sporting his customary bow tie, Burks thanked U.S. Secretary of Health and Human Services Director Alex Azar and others for spreading the message about recovery and treatment across the nation.

“Today,” he said, “this is my pulpit and I have to say this: Someone in a program hears me right now and says, ‘I can, because you did. I can because he did.’ That’s right. Yes, you can. Look in the mirror. There is your miracle.”

In closing, Burks thanked Trump “for allowing me this space to stand beside you. I want to thank God for you and the first lady and your support of the recovery community.”

His remarks drew a standing ovation.

“The experience and opportunity were amazing and humbling,” Burks said before he headed back to Nashville Tuesday afternoon.

“Most people work an entire career and never get to stand beside a sitting United States president. It was like my whole life and career led me to that one moment — and MTSU prepared me for that day.”

Regarding the National Day of Prayer event, Burks said before it got under way that it “is a surreal moment. It’s amazing. I’m sitting in the Rose Garden” with other invited guests.

Burks has spoken in Selva’s classes in the College of Behavioral and Health Sciences as well as at other university opportunities.

“And Monty’s a tough guy,” Selva said. “He fought in mixed martial arts in Murphy Center — and he won.”