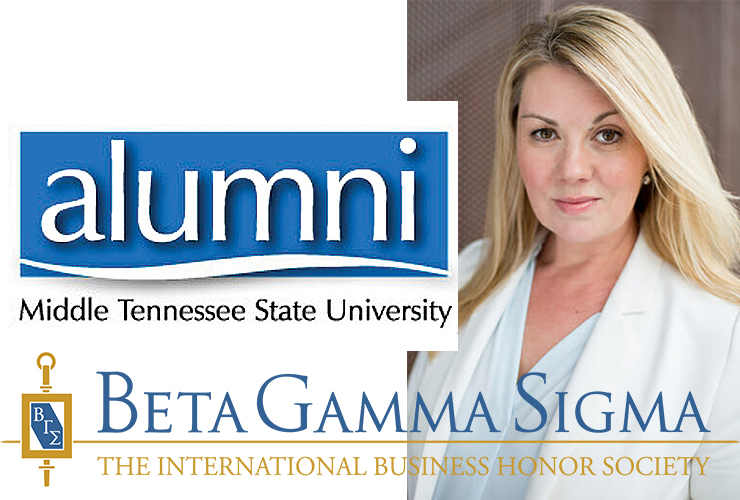 MTSU alumna Angie Grissom (Class of 2000) is among the 2019 recipients of a top national achievement award presented by the Beta Gamma Sigma international business honor society.

Grissom, who earned her Bachelor of Business Administration with an emphasis in marketing from the Jennings A. Jones College of Business, received one of three Beta Gamma Sigma Business Achievement Awards after being nominated by the Middle Tennessee State University chapter of the honor society.

In his nomination letter, David Foote, associate dean of the Jones College of Business, noted that Grissom “lives out and promotes the values embraced by Beta Gamma Sigma Society, serving as role model and positive pathfinder on a global scale through her business and professional endeavors.”

She has coached managing partners and firm leaders across the globe on strategies for increased growth, innovation, accountability and improved culture, Foote noted.

Since Grissom became president of the organization, “it has expanded its offerings to provide clients with innovative approaches to issues like growth; leadership and culture; national women and inclusion initiatives; virtual training and consulting; and more,” according to the website betagammasigma.org.

Prior to joining Rainmaker, Grissom worked in organizational management, sales and human resources. In addition to earning her bachelor’s degree at MTSU, she has completed master’s-level work with an MBA emphasis.

In 2018, Grissom received the Jones College of Business Exemplar Award, which recognizes a Blue Raider alumnus who has “walked in the shoes” of current students and whose personal and professional accomplishments demonstrate that future MTSU graduates can also achieve great things.

Beta Gamma Sigma’s mission is to encourage and honor academic achievement in the study of business, to cultivate and celebrate leadership and professional excellence, to advance the values of the society and to serve its lifelong members. Learn more at www.betagammasigma.org.