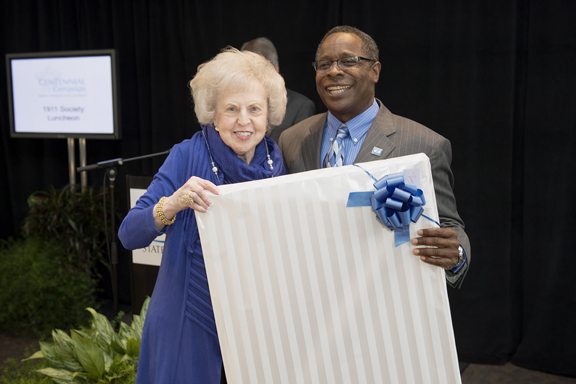 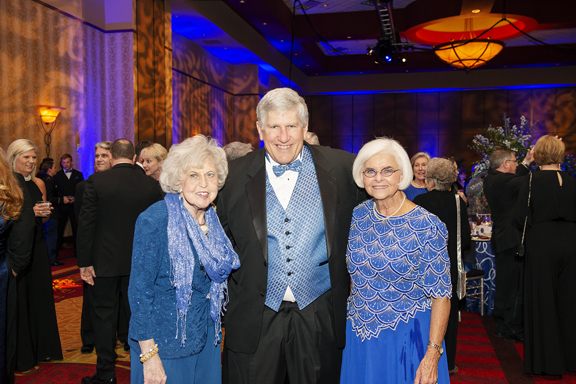 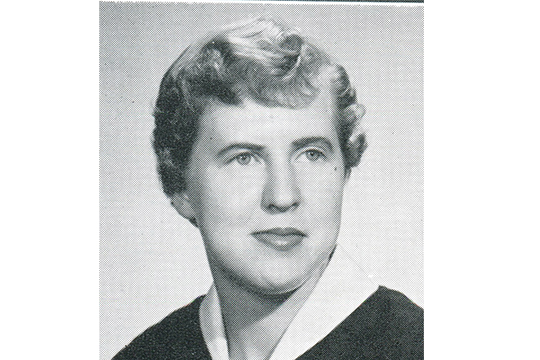 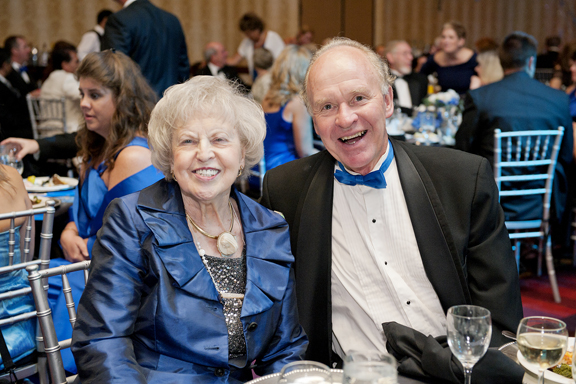 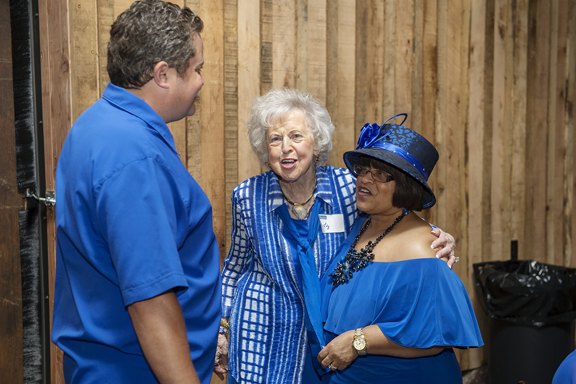 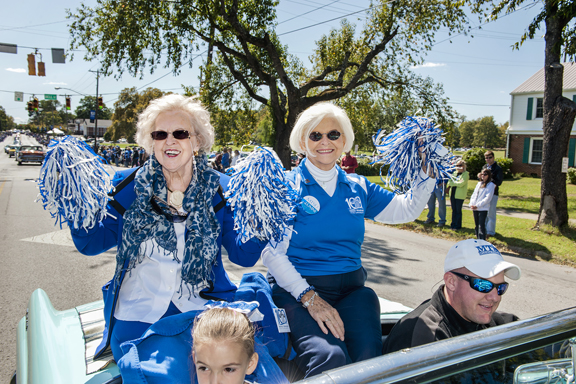 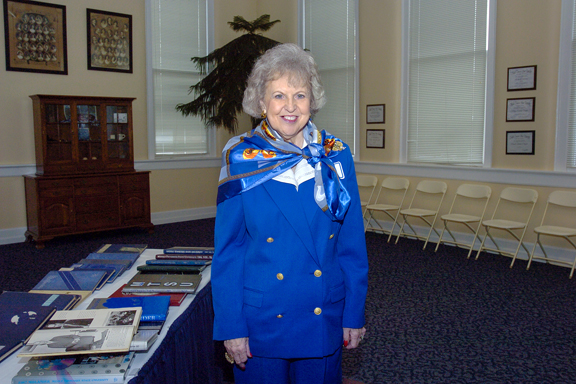 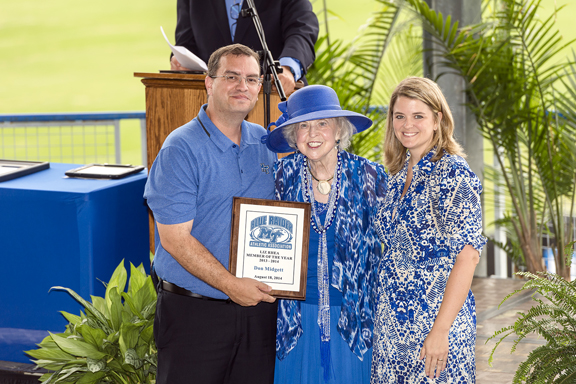 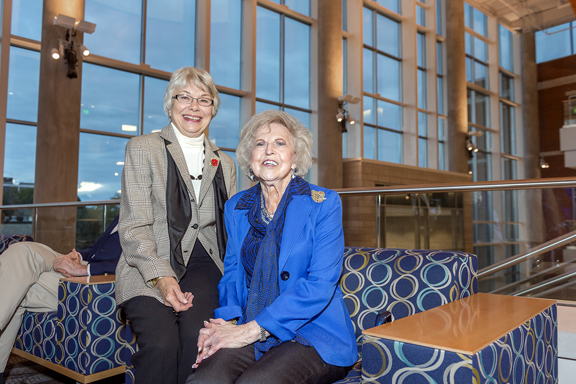 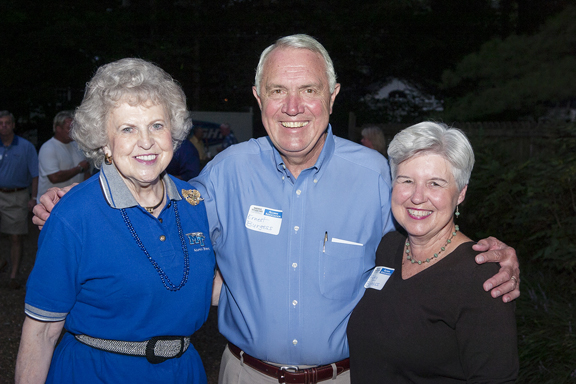 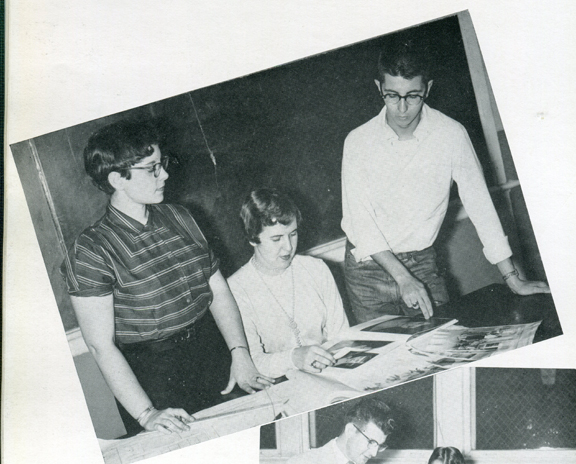 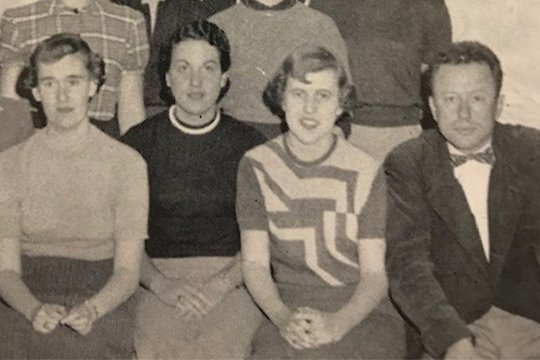 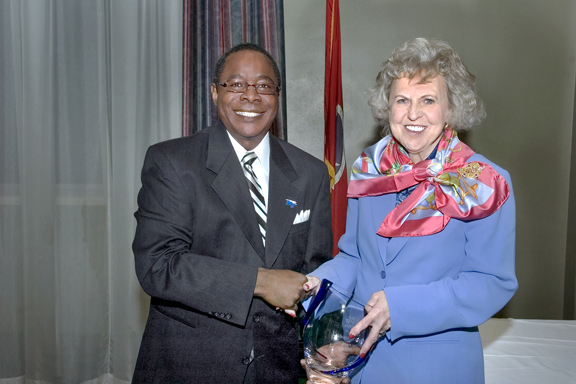 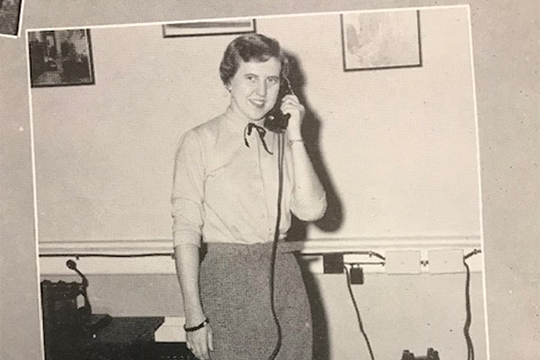 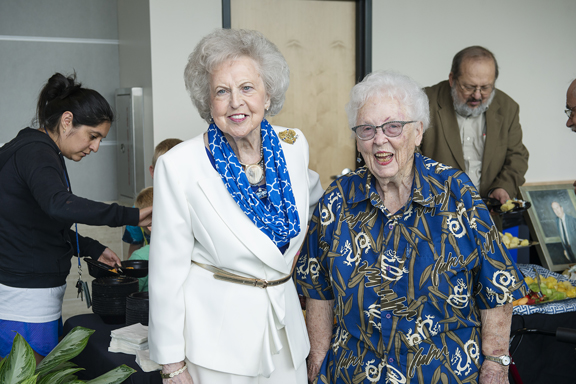 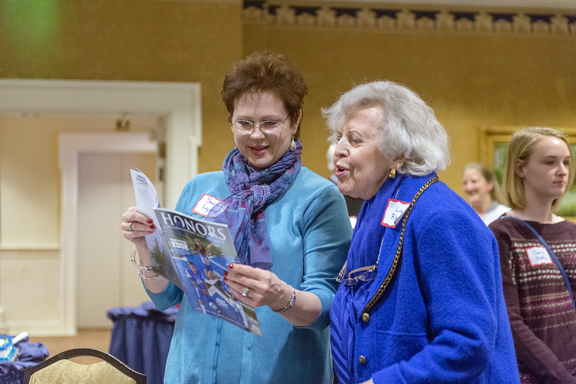 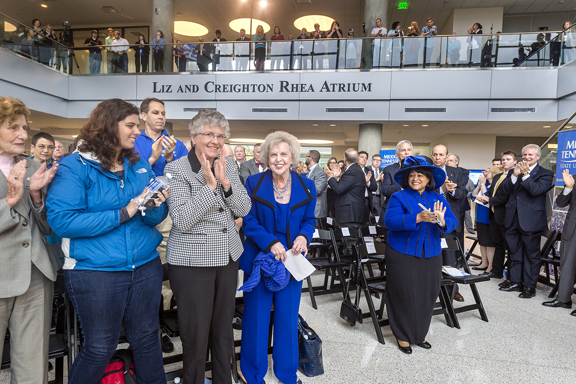 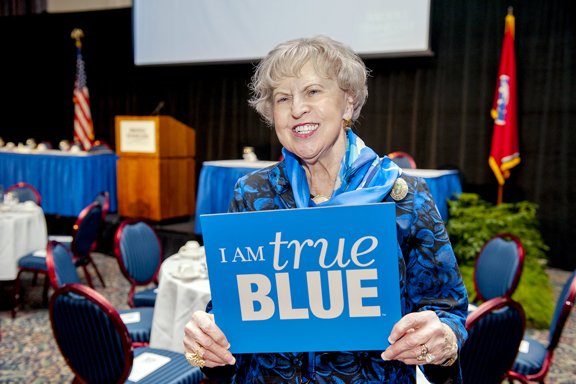 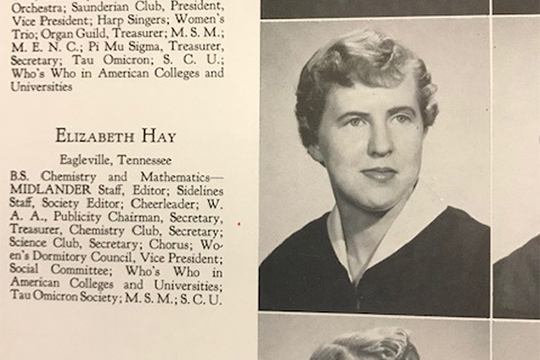 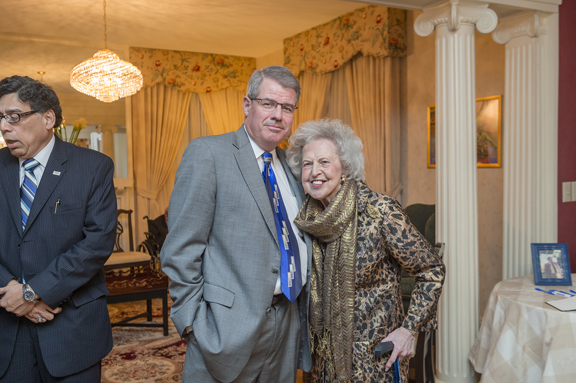 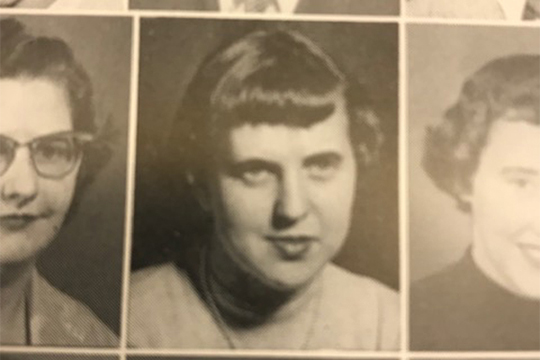 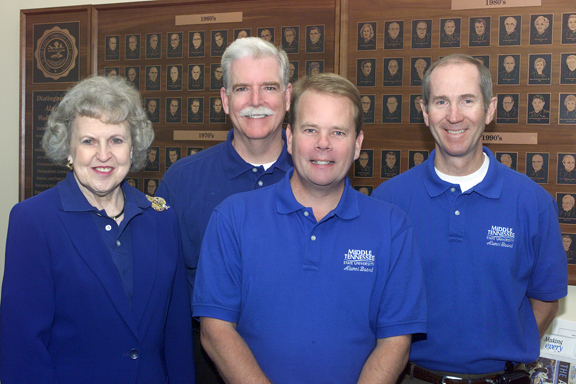 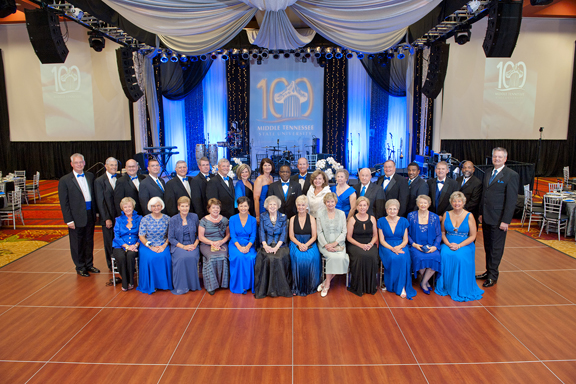 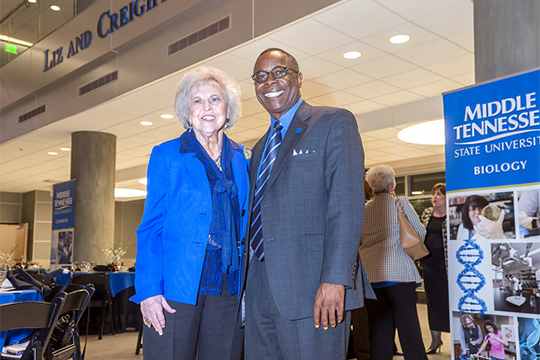 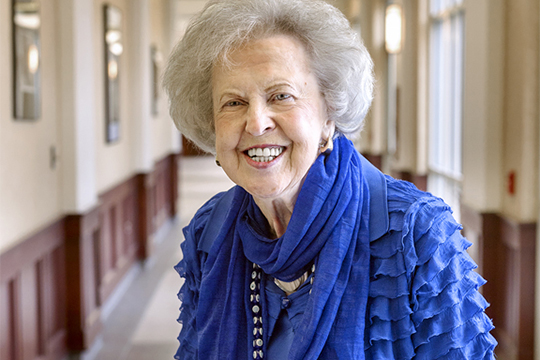 Rhea, a retired radiologist, was perhaps best known for her love of the Blue Raiders and, along with her late husband, Dr. Creighton Rhea, her devotion to philanthropic causes in Rutherford County. 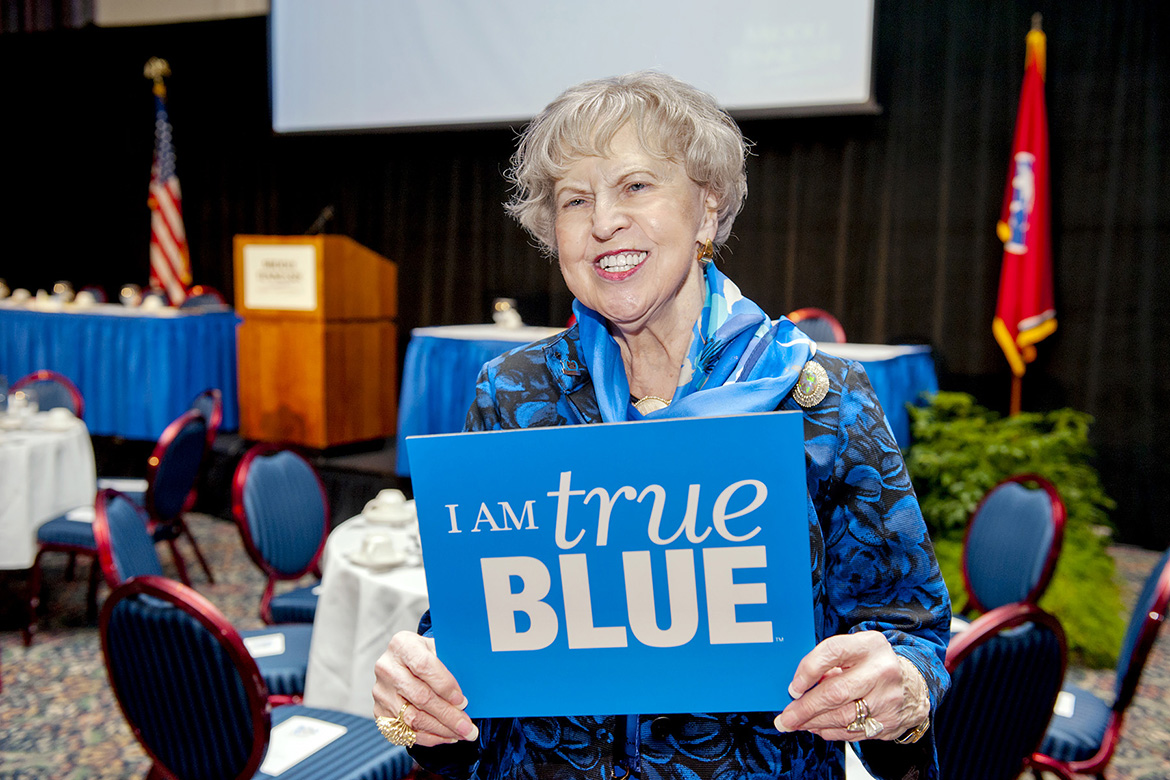 One of MTSU’s most loyal alumni, Dr. Liz Rhea proudly displays a “I AM true BLUE” sign during a university Capital Campaign luncheon. The Murfreesboro resident and Eagleville, Tenn., native died Thursday, May 30. (MTSU file photo by Andy Heidt)

“We lost a truly special member of our Blue Raider family with the passing of Dr. Liz Rhea,” said President Sidney A. McPhee. “Her passion for the university was unrivaled, as she was perhaps our biggest cheerleader and the very definition of what it means to be True Blue.”

MTSU’s Science Building, which opened in 2014, features the Liz and Creighton Rhea Atrium as a tribute to the couple’s generosity. The Blue Raider Athletic Association named its Member of the Year award in her honor, given to someone “who has exemplified being ‘True Blue’ to the core.”

“Her generous spirit, in word and deed, will continue to benefit her alma mater, now and in the future,” McPhee said.

Born Ira Elizabeth Hay on Oct. 11, 1933, Dr. Rhea, the eldest of six children, was valedictorian of Eagleville High School before she earned her bachelor’s degree in science and pre-med in 1955 from then-Middle Tennessee State College, where she literally was a cheerleader for athletics.

In an interview for MTSU’s Centennial Campaign in 2011, Rhea reflected on what she had to do to pay for her higher education and recalled the first time she and her husband donated to the university. 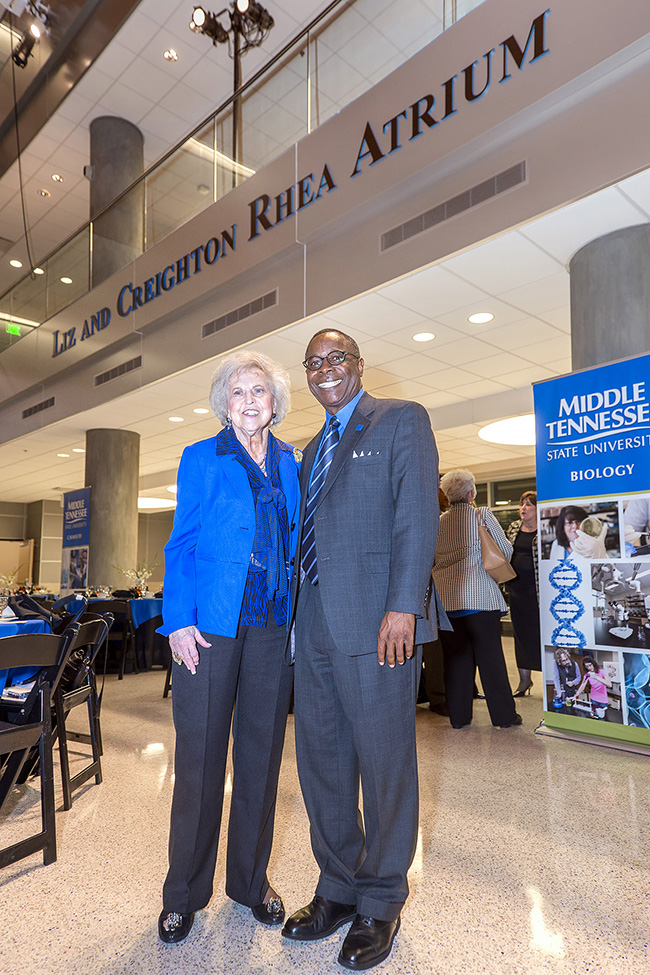 During an October 2014 Science Building Donors Recognition Dinner, Dr. Liz Rhea, left, and MTSU President Sidney A. McPhee are shown in the Liz and Creighton Rhea Atrium on the first floor of the building. Liz Rhea, an MTSU and community philanthropist, died Thursday, May 30. (MTSU file photo by J. Intintoli)

“I actually had to go to the bank and borrow money to go to med school and a little bit for college and then also from a pharmacist there. I had to borrow a little bit from him,” Rhea said. “So the people on little Main Street helped me out. There were no scholarships back in those days.

“So when we were able, we just said, ‘Let’s give back.’ Then, after we gave the first one, it made us happy. Really, I mean, we felt a closeness. We belonged to the university. Over the years, we’ve given a little more and a little more, and people don’t realize how happy or good they’ll feel if they’ll just give back.”

A grade-school principal provided the inspiration leading to her eventual career path.

In a 2013 interview, Rhea said, “He told me, ‘Elizabeth, you’re so smart. Why don’t you go to medical school?’ And I said, ‘What?’ And he said, ‘Just hitch your wagon to a star.’ So, I always said when I grew up, I was going to go to medical school. I don’t know what the people of Eagleville thought of a little girl saying that.”

She graduated from the University of Tennessee School of Medicine in Memphis in 1958, one of only two women in her class, then specialized in radiology. After working at Murfreesboro Medical Clinic, she returned to medical school at Baylor College of Medicine to study mammography and ultrasound. In 1978, she accepted a position at William Beaumont Army Medical Center in El Paso, Texas, and remained there until her retirement in 1992.

After her retirement, she and her husband returned to Rutherford County. She began to volunteer in her community with her husband, who subsequently died in 2004. 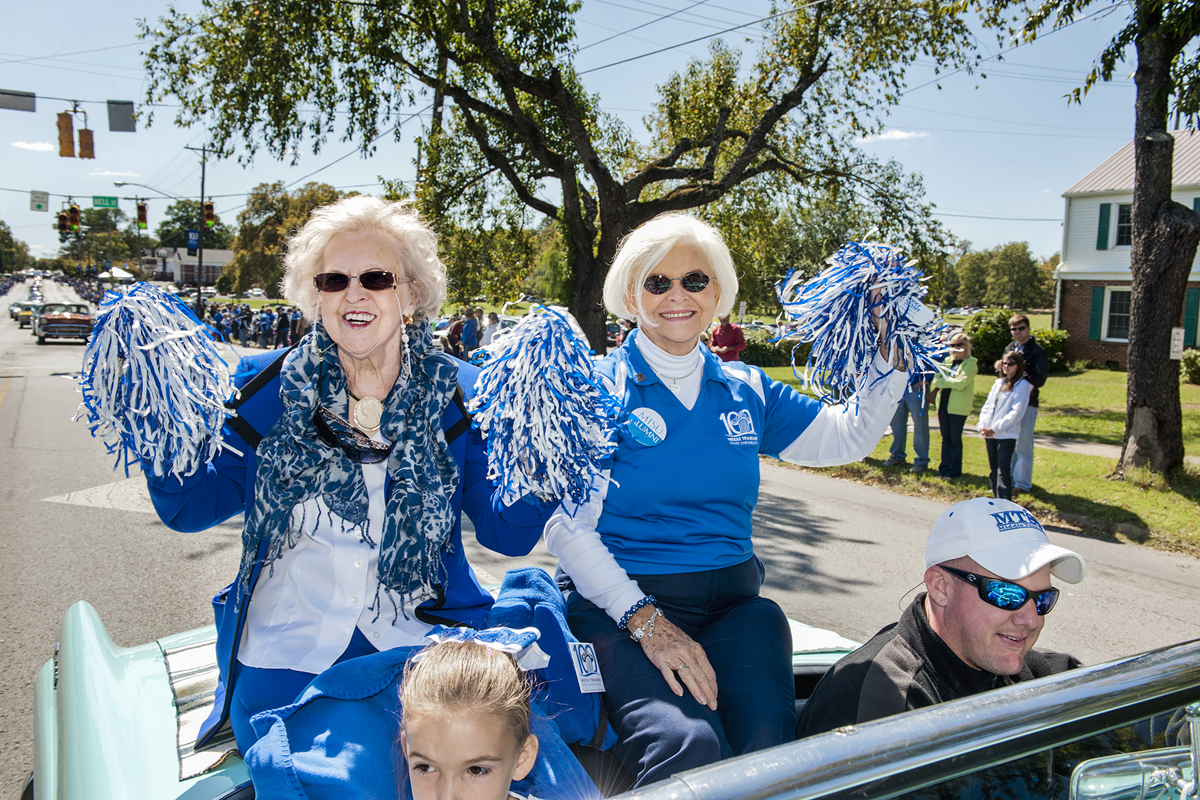 Rhea was involved with numerous nonprofit and charitable organizations, including the Center for the Arts, American Heart Association, Read to Succeed, Habitat for Humanity, Alive Hospice and the Noon Rotary Club.

She served on the board of the MTSU Foundation, the MTSU Alumni Association, United Way of Rutherford and Cannon Counties, and the Saint Thomas Rutherford Foundation, which named its most prestigious award after her: the Dr. Liz Rhea Philanthropist of the Year Award.

“Dr. Liz Rhea’s optimism, determination, and dedication to community service are an inspiration to all those who are privileged to know her,” said now-Sen. Dawn White in a resolution she penned to honor Rhea’s selection as the 2016 Rutherford Heart Ball Honoree and the Heart of Tennessee Hero of the Year. 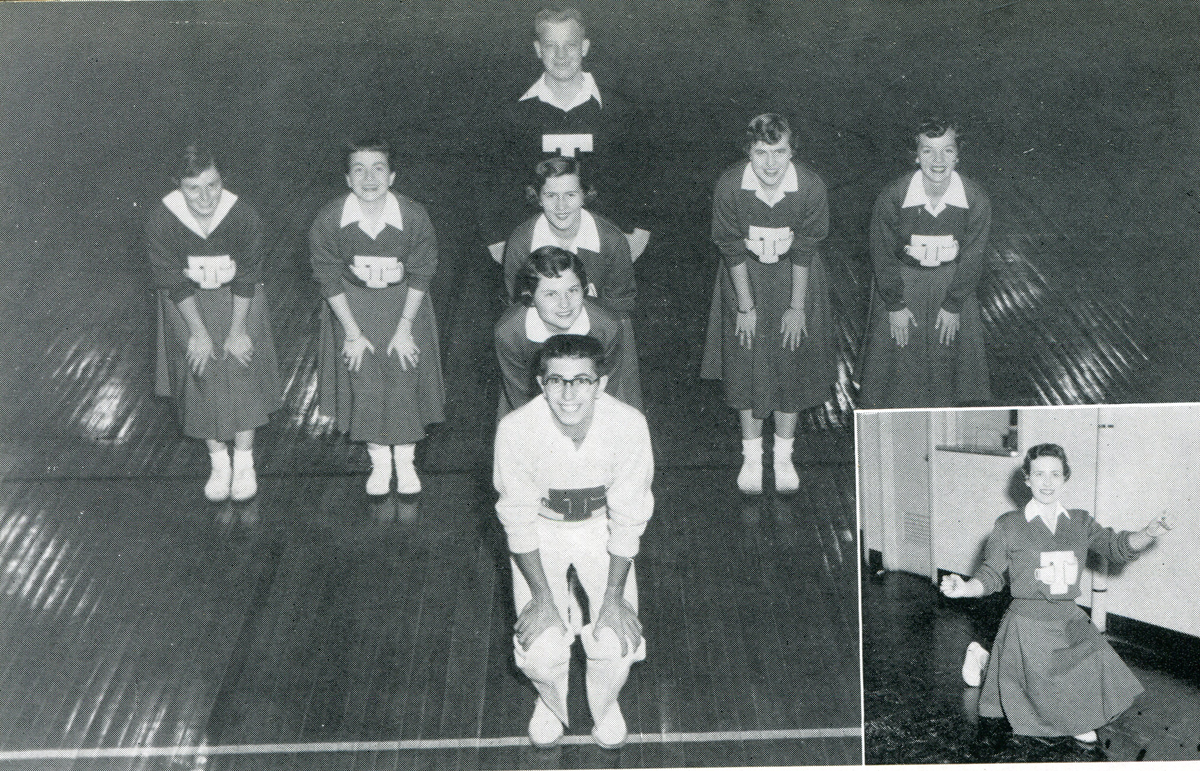 McPhee and his wife, first lady Elizabeth McPhee, said they “deeply mourn the passing of a truly dear friend.”

“Selfishly, I will miss seeing Liz, dressed almost always in blue and white, on the sidelines, in the stands or with the crowd at a MTSU event. I will miss her counsel, her laughter, her intellect and her strength,” the president said.

“She loved MTSU, and we loved her back. It is difficult to imagine Middle Tennessee State University without Liz — her great smile, her devotion to our students, her unabashed and unceasing loyalty to her beloved Blue Raiders, and her unwavering commitment to the progress and success of her alma mater,” McPhee said.

“But we can take some comfort in knowing that she has found peace and that she is now reunited with her beloved husband, Creighton. And I know that her memory, and her spirit, will remain an important part of our university for generations to come.”

In the 2013 interview, Rhea said, “My blood runs blue. I was a cheerleader in college here and I’m always cheering on this university. Go MTSU.” 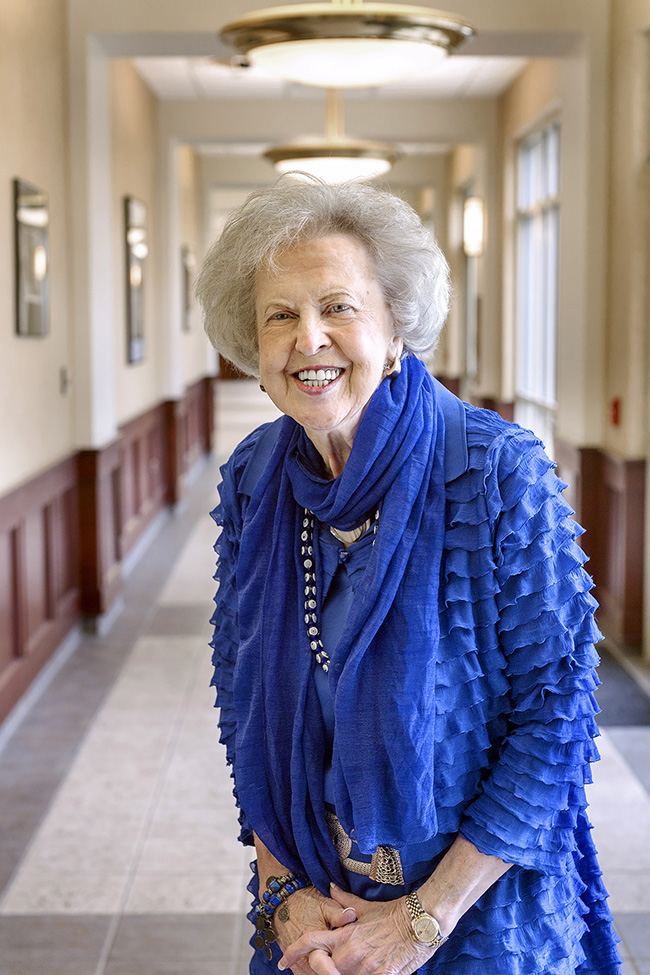 During a break at an MTSU Foundation Board meeting in November 2013, Dr. Liz Rhea, clad in her favorite shade of blue, smiles in the hallway of the Paul W. Martin Sr. Honors College. The alumna and longtime supporter died Thursday, May 30, in Nashville, Tenn. (MTSU file photo by Andy Heidt)