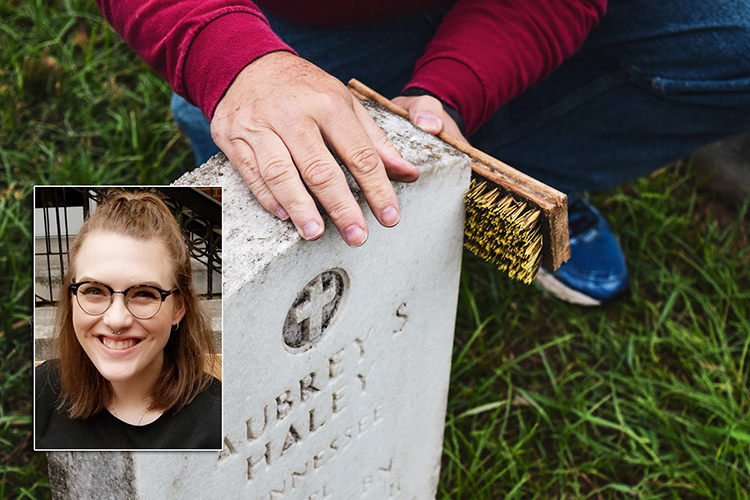 A new MTSU media graduate is out in the wide world with a hefty addition to her resume: a national top-10 finalist win for feature writing in the 2019 Hearst Foundation’s Journalism Awards Program. 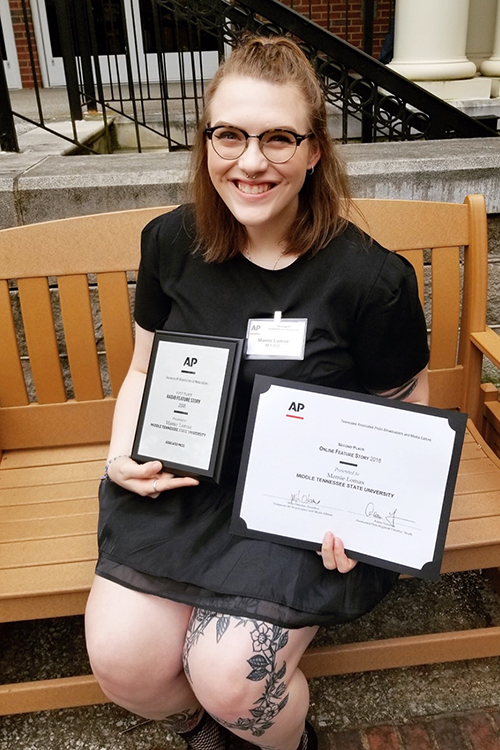 New MTSU College of Media and Entertainment graduate Mamie M. Lomax shows her awards from this spring’s gathering of the Tennessee Associated Press Broadcasters and Media Editors, including recognition for the same feature story on a Murfreesboro man’s volunteer efforts to keep veterans’ headstones at a local cemetery clean that won her a national top-10 finalist nod from the Hearst Foundation’s Journalism Awards Program. (Photo courtesy of Mamie M. Lomax)

Mamie M. Lomax of Smyrna, Tennessee, a May graduate of the College of Media and Entertainment and a former lifestyles editor at the student newspaper, Sidelines, earned her nod as one of the country’s top college journalists with her entry in the personality/profile writing category, “Passion inspires Murfreesboro man to clean, conserve veterans’ headstones.”

The profile of Evergreen Cemetery volunteer Jeff Milstead, published in Sidelines in November 2018 and accompanied by Lomax’s photos, is a first-person account of the painstaking work of honoring Murfreesboro-area veterans by maintaining their grave markers. You can read it here.

The Hearst awards, called “the Pulitzer Prizes of collegiate journalism,” are considered the top honors for journalists at accredited U.S. universities.

“I find myself at a loss of words when I try to describe how I feel about the awards and also the experiences that brought upon the pursuit of the awards,” Lomax said, explaining that she felt she’d lost her creative drive over the preceding summer.

She worked with WMOT-FM Radio News Director Mike Osborne and School of Journalism and Strategic Media professor Leon Alligood, who also serves as the Sidelines adviser, last fall, however, and said their guidance helped her “begin to feel inspired again.”

“I am so content and fully thrilled; I’m terribly excited for the future experiences these opportunities have opened doors for. Thank you, from the bottom of my heart and soul, to everyone that has supported me throughout these experiences.”

Lomax, who’s also brought home statewide Associated Press collegiate honors for her work, is the latest in a series of MTSU students whose work has been recognized by the Hearst Foundation’s program. Past Hearst honorees from the College of Media and Entertainment include:

• Alex Blackwelder Rifwald, a 2011 global studies and mass communication graduate who was a top-10 finalist in the 2009 Hearst multimedia competition. Rifwald was a photography editor and staff writer for Sidelines and now runs her own photo studio in Knoxville.

• Andy Harper, a 2014 media studies alumnus who was a top 20 finalist for spot news writing in Hearst’s 2008 contest. The former Sidelines editor-in-chief is now a designer for the Gannett Design Studio in Phoenix, Arizona.

• Sarah Lavery Porterfield, a 2008 journalism graduate who was a top 20 finalist for feature writing in the organization’s 2007 contest. Porterfield, also a former Sidelines editor-in-chief, is now a content manager for the Nashville offices of Kernel Creative at Spectrum Reach, the advertising sales division of Charter Communications.

The Hearst Journalism Awards Program, established in 1960, includes monthly writing, radio news, TV news, photojournalism and multimedia competitions and annual championship finals in each, providing up to $700,000 in scholarships, matching grants and stipends every year. It’s open to undergraduate students in 104 accredited university journalism programs across the nation. 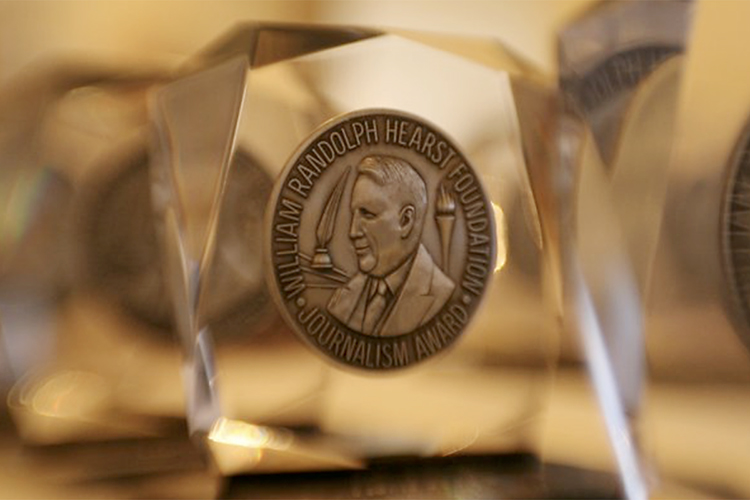 Eight writing finalists, six photojournalism finalists, five radio finalists, five television finalists and five multimedia finalists chosen from the monthly competitions and selected from a record 1,351 entries for the 2018-19 academic year will participate in spot assignments to compete for additional scholarship awards ranging from $1,500 to $10,000.

You can learn more about the awards program at www.hearstawards.org.

One of the largest communication programs in the nation, MTSU’s College of Media and Entertainment offers degree concentrations in 14 major areas — ranging from journalism to digital media and media management to recording industry management — and is accredited by the Association for Education in Journalism and Mass Communication.

In addition to the journalism school, the college includes a Department of Media Arts and a Department of Recording Industry and offers Bachelor of Science degrees in media and entertainment, animation, video and film production, interactive media, journalism, recording industry and audio production; a Master of Fine Arts in Recording Arts Technologies degree; and a Master of Science in Media and Communication.

Along with WMOT-FM, a 100,000-watt public radio station celebrating its 50th anniversary this year, the college is also home to the Center for Innovation in Media, the Center for Popular Music and the Seigenthaler Chair of Excellence in First Amendment Studies. 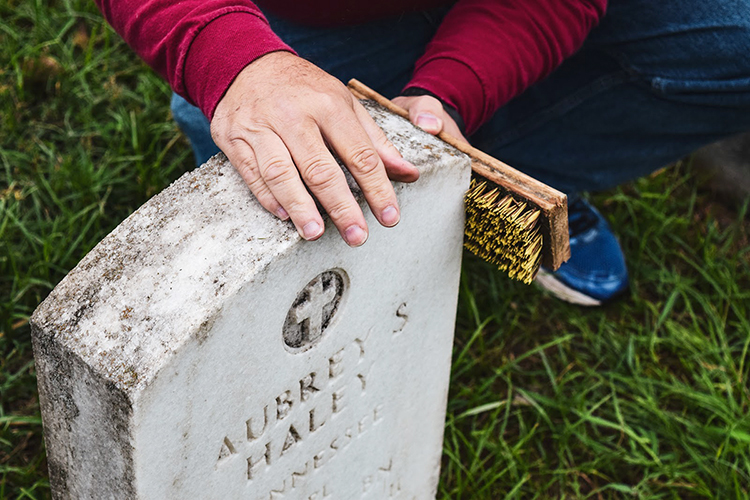 Murfreesboro volunteer Jeff Milstead works to clean a veteran’s headstone at the city’s Evergreen Cemetery in this photo that accompanied new MTSU grad Mamie M. Lomax’s award-winning feature story on his efforts. Lomax, a Smyrna, Tenn., resident, received a national top-10 finalist nod from the Hearst Foundation’s Journalism Awards Program for the story as well as a Tennessee Associated Press Broadcasters and Media Editors award. You can read Lomax’s story by clicking on the photo above. (Photo by Mamie M. Lomax)