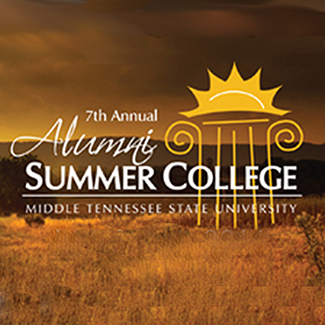 History and the Civil War provided the theme for this year’s summer college, held June 25-27.

From welcomes provided by university staff and administrators to a surprise visit by Abraham Lincoln impersonator Dennis Boggs of Nashville, the event was much anticipated by attendees, who turn it into a family and friends reunion.

“Everyone is excited to reunite with old friends,” said Alumni Relations assistant director Rhonda King. “It’s like a family reunion.”

First-time attendee Ann Waggoner of Tullahoma, Tennessee, who earned her master’s degree and specialist in education degrees in 1971 and ’94, respectively, said it had been a great experience.

“I’ve enjoyed meeting people — and a lot of people from Tullahoma are here,” she said.

They later visited the Stones River Battlefield before returning downtown for dinner.

Two of the highlights from Day 2 of Alumni Summer College were hearing presentations by author and historian Robert Hicks of Franklin, Tennessee, who wrote “The Widow of the South,” and Murfreesboro physician George Smith, who discussed the “13th United States Colored Troops Living History Association.”

The Friday, June 27, agenda included trips to Nashville to visit the Belle Meade Plantation and to Franklin to tour The Carter House and Carnton Plantation.

MTSU President Sidney A. McPhee addresses some of the 75 people attending the seventh annual Alumni Summer College June 25 in the second-floor courtroom at the Rutherford County Courthouse. (MTSU photos by Andy Heidt)