‘MTSU On the Record’ heads to the land... 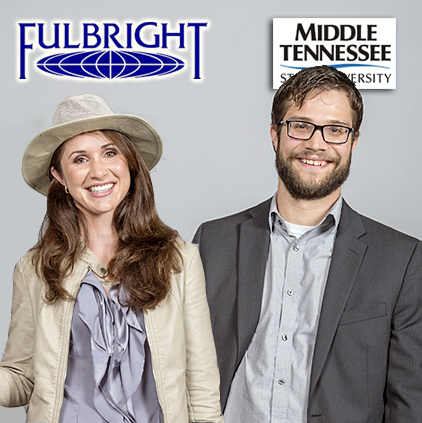 Two stellar scholars from MTSU explained their upcoming research expeditions to Brazil on a recent edition of the “MTSU On the Record” radio program.

Host Gina Logue’s interview with graduate students Jennifer Benetti-Longhini and Kevin McDaniel first aired June 30 on WMOT-FM (89.5 and www.wmot.org). You can listen to their conversation here.

In April, Benetti-Longhini and McDaniel won fellowships from the U.S. Fulbright Student Program, one of the most distinguished awards of its kind in the nation.

Fulbright fellowships are administered by the U.S. Department of State’s Bureau of Educational and Cultural Affairs.

Benetti-Longhini, a Chula Vista, California, native now living in Tullahoma, Tennessee, will spend a year conducting research on butterflies while working with an ecological program funded by the U.S. and Brazil

“I’ve become more and more interested in the area,” Benetti-Longhini said of the region where she will study. “It contains a large part of the Amazonian Basin, which is the iconic center of biodiversity and has a huge impact on the world as far as climate is concerned.”

McDaniel, a Memphis, Tennessee, native now living and working in Murfreesboro, Tennessee, will continue his work mapping prehistoric sites in Brazil through the study of soils.

“People think the soil is so acidic, but you see this rich diversity,” said McDaniel of Brazil’s archaeological history. “Where are the people? It’s just that big empty question. Where did they go? There had to have been people here.”

A video clip from the interview may be seen below.