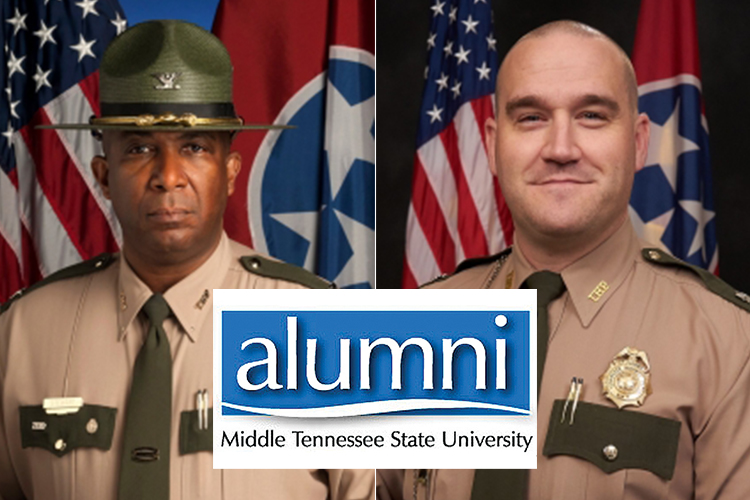 Two Middle Tennessee State University alumni have put their leadership imprints on the Tennessee Highway Patrol, one as a trailblazing commander who retired recently after decades of state service, and the other a fellow alumnus who was chosen to replace him.

After becoming a state trooper in Montgomery County in 1987 and rising through the ranks, Col. Dereck Stewart retired in mid-December after 33 years of state service, becoming the first African American colonel in THP’s history in 2018, according to a release from the Tennessee Department of Safety and Homeland Security.

Stewart, who earned his bachelor’s degree in liberal studies from MTSU in 2017, handed over the reins of the agency to fellow MTSU alumnus and former Lt. Col. Matt Perry, who was promoted to colonel after serving the agency since 2004, most recently as Stewart’s executive officer. Stewart recommended Perry for the promotion.

“Serving the Tennessee Highway Patrol as the 14th colonel is one of the greatest honors of my career,” Stewart said in the TDSHS release. “I joined this organization, as so many others before me, in hopes of making a positive difference. I love this organization, all that it represents and stands for.”

Perry, who began his law enforcement career as a Williamson County sheriff’s deputy, earned his bachelor’s in liberal studies from MTSU in 2005 and is working toward a master’s in professional studies at the university.

Both alums earned their bachelor’s degrees through MTSU’s University College, which offers the largest adult degree completion programs in the state as well as a wide variety of flexible academic programs that cater to lives of working professionals.

MTSU professor of psychology Mark Frame, a consultant with the MTSU Center for Organizational and Human Resource Effectiveness, or COHRE, worked with Stewart and Perry through the THP’s partnership with COHRE that began several years ago.

“As a professional I was struck by Col. Stewart’s vast knowledge and expertise about every imaginable aspect of the THP organization,” Frame said. “It was my distinct please to have him later take an Introduction to Industrial and Organizational Psychology course I taught. During the course, I found him to be a dedicated and engaged student who would contact me throughout the course to discuss how the concepts and content of the course could apply to the organization.

“When he took the reins of the THP, he was the right person at the right time to lead the organization. Col. Stewart understands that the troopers make the Tennessee Highway Patrol the exceptional agency that it is and has been for generations.”

Frame said he’s also been impressed by Perry, who was promoted by Gov. Bill Lee and TDSHS Commissioner Jeff Long to the lead role.

“I came to know Matt Perry while working with THP on the THP Cadet Selection efforts. I was immediately struck by his ability convey his understanding of the complexities of the THP organization to an outsider like myself,” Frame said. “I haven’t had the pleasure of having Col. Perry as a student, but in almost every conversation I’ve had with him, his intellectual curiosity and keen attention to detail is always front and center.

“Col. Matt Perry has the expertise, training, and education to continue the upward trajectory of the THP by continuously improving the high standards, requirements, and training that Tennessee has come to expect from the Tennessee Highway Patrol.”

Stewart served most recently on the International Association of Chiefs of Police Board of Directors, and is a graduate of the FBI National Academy and the FBI National Executive Institute, the TDSHS release states.

Perry started his law enforcement career as a deputy with the Williamson County Sheriff’s Office. In 2004, Perry joined THP and rose through the ranks in both the administrative and field bureaus. He is a graduate of Northwestern University’s School of Police Staff and Command.

MTSU criminal justice associate professor and interim Department Chair Lee Wade said his department, which offers majors and minors in the field as well as a master’s degree, looks to prepare future leaders in the mold of Stewart and Perry.

“The Criminal Justice Administration Department is proud of the success of any law enforcement officer in the state of Tennessee, and we celebrate the achievements of Col. Stewart throughout his historic career,” Wade said. “We further congratulate Lt. Col. Perry on his promotion. As a department, we strive to prepare students for success in the field of criminal justice in our administrative and legal course content, and we hope that all CJA students seek to become inspirational leaders, and serve the public much like Col. Stewart.”