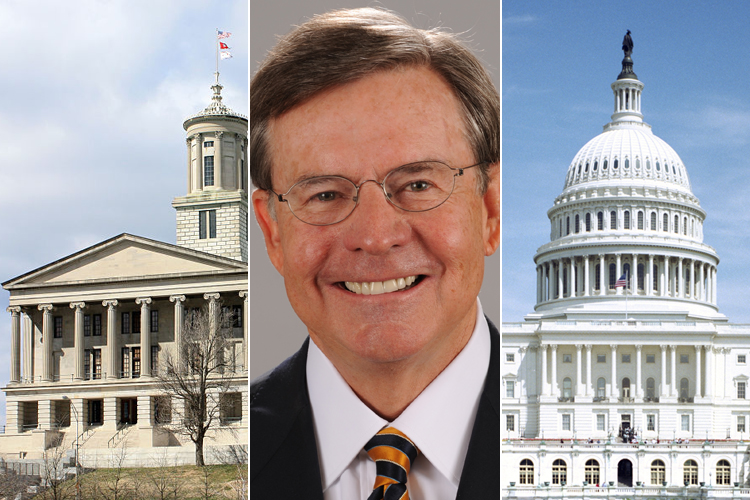 An MTSU alumnus whose political career has taken him from Tennessee’s capital to the nation’s capital will return to campus Nov. 13-14 to share his experiences.

Jim Free will join Dr. Louis Kyriakoudes, director of the Albert Gore Research Center, in a discussion during Kyriakoudes’ “Southern Politics and Policy, 1890-2000” class at 4 p.m. Monday, Nov. 13, in Room 219 of Peck Hall.

Free also will help Kent Syler, an assistant professor of political science, teach two sections of “Introduction to American Government and Politics” on Tuesday, Nov. 14 at 9:40 a.m. and 2:40 p.m. in Room 211 of Peck Hall.

The public is welcome to attend all Syler’s classes, but seating will be limited.

Syler noted that Free served as MTSU student body president in 1968 and “has built a distinguished career in government and business.”

Free earned his bachelor’s degree in political science in 1969 and his master’s degree in public administration in 1972, both from MTSU. After graduation, he served as the university’s director of admissions and later became a vice president’s assistant at the University of Tennessee.

Free, who served as an administrative assistant to Ned McWherter when McWherter was speaker of the Tennessee House of Representatives, eventually rose to chief clerk of the House. In 1977, he was hired as special assistant for congressional affairs to President Jimmy Carter, advocating Carter’s positions on transportation, trade and environmental issues.

The Columbia, Tennessee, native and his wife, Ann, continue to support his alma mater by establishing the Jim and Ann Free Endowed Scholarship in Music Business at MTSU. His professional papers and a video oral history will be housed at the Gore Center.

A campus parking map is available at http://tinyurl.com/MTSUParkingMap. Off-campus visitors attending Syler’s classes should obtain a one-day permit from MTSU’s Office of Parking and Transportation at 1403 E. Main St. or online at www.mtsu.edu/parking/visit.php.