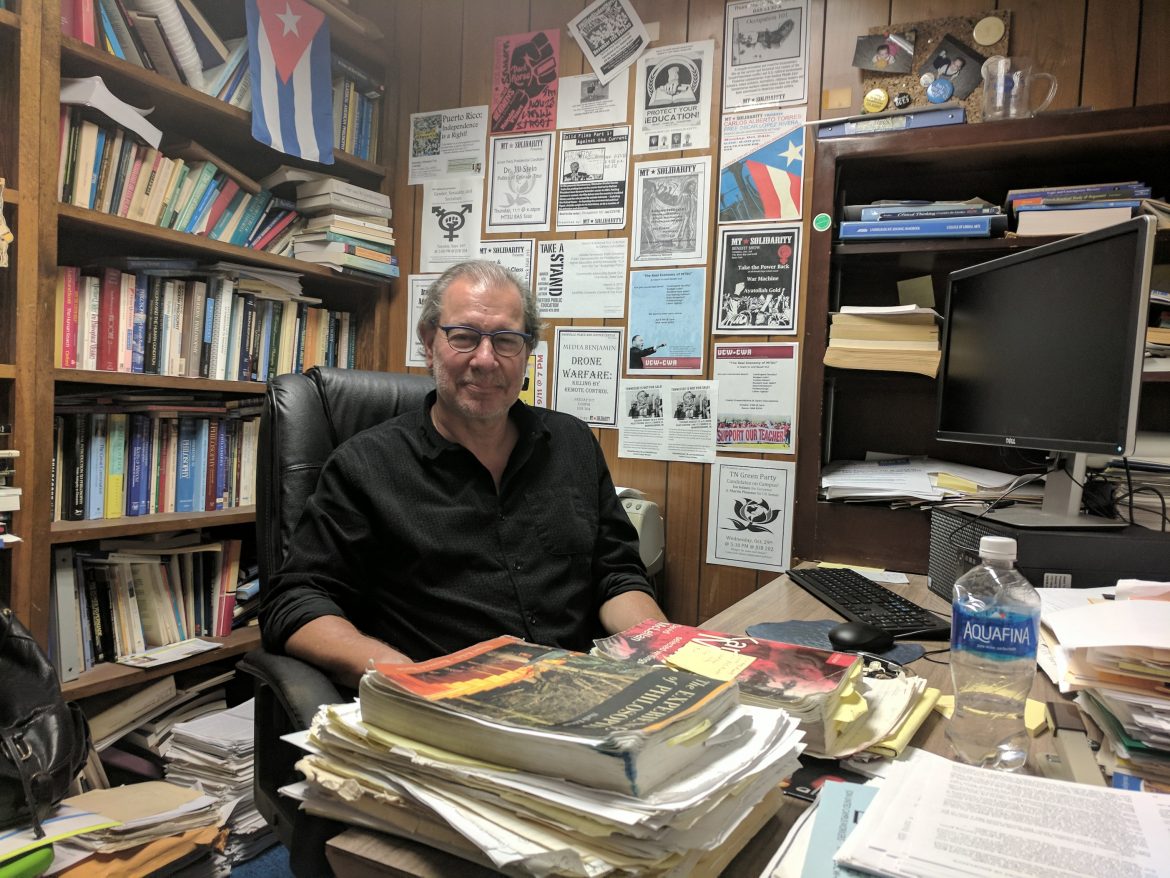 Today, the Student Voice is meeting up with Dr. Michael Principe of the philosophy department. We’re talking Marxism, cooking, and keeping up with Rate My Professor.

Thanks for agreeing to interview today! How did you become interested in the subject of philosophy?

Well, I think all of us are natural philosophers in some respect. That is, we ask questions from a very early age about what things mean and why they are how they are. Maybe I did that a little more than some people as a young person; I’d say that when I went to college and took philosophy classes, I recognized myself in that practice and those questions, so I gravitated to philosophy.

Where did you go to college?

University of Michigan for undergraduate, and Vanderbilt for my master’s and doctorate. I liked Vanderbilt’s program a lot. Philosophy is one of those subjects that different universities emphasize differently, and the Vanderbilt program was one that had a good pluralist approach, so I chose that. I also like living in the South; it’s much warmer than Michigan!

What made you decide to start teaching philosophy?

If you want to make a living with philosophy, the most readily available way to do that is to go into academia, so that’s what I did. In many ways, my primary way of practicing philosophy is through all the engagements that flow out of teaching, and I really enjoy it.

When did you start teaching at MTSU?

I started here in the fall of 1987, so this year will be my thirtieth anniversary with the school. I’ve seen MTSU go through a lot of changes in my time here! When I was hired, there were only three of us here in the philosophy department. Now we’ve got nine people and we’re hiring our tenth this year, and we’ve become the Department of Philosophy and Religious Studies, so we’ve grown a lot. We have a lot of people in our department who have been here for quite a while, too, so the people aren’t changing out that much. We just keep growing!

What’s your favorite class to teach?

I like all of the classes that I teach. I’ve been here at MTSU a long time, so I’ve been able to develop all of my classes, and that ones that I teach are the ones that I want to teach. There’s no class where I think “Gosh, the department chair stuck me with this class that I hate”. I really like them all.

If you could make every student at MTSU take one class that you teach, which class would it be and why?

Well, beyond Intro to Philosophy–which you would really need to take before you took anything else–I would probably choose my class on Marx and Marxism. I feel like that’s an area in our culture and around the world that it seems like everybody’s got an opinion on, but very few people have seriously engaged with the text or the traditions. I think it would be very beneficial for people to know more about the philosophical, sociological, and political movement of Marxism.

What’s one of your favorite college memories?

Well, there are a lot of things there…some of which I probably shouldn’t talk about (laughs). When I was an undergraduate at Michigan, which is very much an activist campus, there was a period of time in my freshman year where there was a major graduate student strike. It was a significant event in graduate student labor history, and I was involved as an undergraduate supporter for the graduate students who were trying to get a contract. It was a very successful strike, at least in the short term; the Teamsters refused to cross picket lines to stock the cafeterias, and the university was facing the choice of having to send all the students home. There were a lot of picketed buildings where many professors canceled their classes in solidarity, and we tried to get the undergraduates to boycott the classes that were still being held during this time. So that was fun! It was a significant labor history event of sorts.

You know, I actually have nothing coming to me; I really loved my college experience and I don’t think I would change a thing.

What is some advice that you would give to current students about how to succeed academically and professionally?

I would tell them to see college as this wonderful opportunity that you have, rather than a hoop that you have to jump through or a burden that you have to bear. You’ve carved out a space for yourself, even if you’re just going part-time, and you’ve got that space to learn and grow. Instead of thinking “Well, what’s the minimum I could do to get my credit or my grade?”, just embrace it and go all the way, because you don’t get these opportunities very often in life. You have your whole life to be working and doing other things. If you’ve got some space to learn and grow, you should take it. Other things will fall into place behind it.

How do you get your students engaged in introductory courses?

Well, you want them to see that the practice of philosophy is fun and engaging, and matters to them at a personal level. We cover a bunch of different issues, and some matter to some people more than others, but I try to make them all relevant. And I try to bring a little bit of myself into the classroom and show that it’s real for me, and hopefully, they respond to that.

That’s another one where it’s pretty hard to choose favorites. I mentioned the Marx class earlier, and in many ways, Karl Marx is a figure whom I respect a lot. I am thoroughly engaged by the classic philosopher Plato as well, which doesn’t mean that I think everything he said is true, but I think he is a fascinating figure and writer. His texts are wonderfully complex, and at a certain level of enjoyment, Plato is a certain kind of favorite. There are a lot of philosophers that I could put into different categories of favorites.

Can you put your life philosophy in a nutshell?

Oh no, I couldn’t do that. In a lot of ways, I’m still trying to figure it out; it’s something that continually develops. I keep changing, the world around me keeps changing, and new problems arise both in the world and my personal life. Everyone has a certain worldview and a certain set of values, but I do think it’s probably best to see that as an evolving process. I have certain values that show themselves in different ways, and I have different interests and projects that I take on, but I can’t really summarize my philosophy. Maybe this is my failing, that I don’t have a comprehensive worldview.

It’s probably better to be that way than to choose a philosophical label and stick with it just because you like the sound of that label.

That’s right; people have a tendency to want to put themselves in boxes with a bunch of labels, but I think it’s better to define yourself by what you do rather than what your labels are. Sometimes we try to fool ourselves about who we are by embracing a list of beliefs that we hold, but what’s really important is how you’re living your life and what you’re doing with those beliefs.

What is something about you that your students wouldn’t guess?

I’ll go with two things: I’m a pretty big sports fan, and people are often surprised by that. I guess it doesn’t seem to fit with their idea of me. I like college sports; I don’t really do the NFL and the NBA, but I like college football and college basketball. The other thing is, I can cook anything! That also seems to surprise people. I guess they think that it’s too domestic or something. My favorite things to cook are things that wind up all together in one concoction, things like stews or casseroles, some combination of things that all goes into the same place. I will cook separate things though; yesterday I grilled some killer pork chops!

What do you read for fun outside of research and classes?

I actually read a fair bit of fiction; one of the classes I teach is Philosophy and Literature. There was actually a time when I was an undergrad that I considered being an English major, and then I almost double-majored in philosophy and English, but I was one class short. But literature has always been a deep interest of mine. I love classic figures like Dostoevsky, whom I actually taught a class on at one time. Another wonderful figure is Iris Murdoch; even though much of her writing is in novel form, she was actually a trained academic philosopher who wrote philosophical works as well, although not as often as she wrote novels. It’s very interesting when people write fiction and write in another form as well, so you can see how those forms blend together.

Now the moment of truth: do you ever look yourself up on sites like Rate My Professor?

Sure I do! It can be very entertaining. Every so often, I’ll have a pretty good idea of which student wrote which review. I feel like it’s good to be well-versed on the internet and have an idea of what is out there about you. I like to know what’s being said about me. In fact, I haven’t checked in a while, so thanks for reminding me! I’ll have to go look after this (laughs).

If you’re interested in taking a class in philosophy or religious studies, click here to go to the department’s homepage.