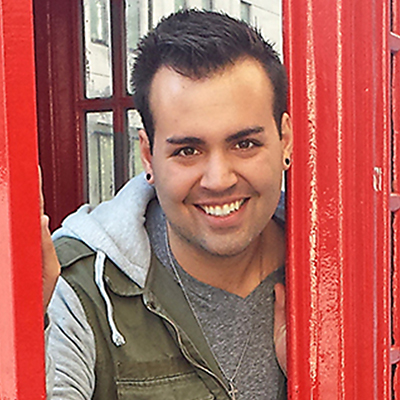 Studying abroad, learning new languages and volunteering with refugees helped convince 2015 MTSU graduate Dalton Lauderback, the university’s latest recipient of a Fulbright Award, of the importance of being a “globally engaged citizen.”

The Fulbright U.S. Student Program sends students, young professionals and artists to teach and/or conduct research for up to a year in other countries.

Lauderback, the 14th MTSU Fulbright recipient in the last seven years, will serve as an English teaching assistant in Sachsen, Germany, during the 2016-17 school year. You can see a list of past and present Fulbright recipients at www.mtsu.edu/honors/FULBRIGHT.php.

After graduating in 2015 with a double major in global studies and political science, along with minors in psychology and German, Lauderback chose to apply for the Fulbright teaching position in Germany for several reasons.

His grandparents emigrated from the area in the 19th century, and he also has a genuine interest in teaching and learning about other cultures, especially foreign languages.

“For me, learning a second language has, in a way, opened up the world,” Lauderback says.

“While serving as an English teaching assistant, I not only hope to connect personally with the students, teachers and the local community, but I also want to help others form international connections and have the kinds of global experiences that knowing multiple languages allows.”

Lauderback has spent the past few years as a volunteer for Catholic Charities of Tennessee, where he taught English to refugees from Myanmar, Congo and Somalia. Once a week, he visited refugees at their apartments in order to teach them the basics of the English language and to help them transition into American culture.

During the spring 2014 semester, he completed a study at the University of Zurich in Switzerland, describing his experience there as “one that really opened my eyes to what the world has to offer.”

When he returned to MTSU, he decided to work as an International Student Exchange Program Ambassador because he wanted to encourage his fellow students to pursue similar study-abroad opportunities.

After his time in Germany, Lauderback says, he hopes to serve in Southeast Asia with the Peace Corps and to apply to Yale University’s global affairs master’s program.

He hopes to work for the nonprofit company Mercy Corps, and his ultimate goal is working in developing regions on issues of conflict resolution and sustainability.

Regardless of his future career, however, Lauderback says, he “will always be a globally engaged citizen.” He added that the Fulbright is a great opportunity to continue to pursue his passions in international relations, civic service and intercultural communication.

The U.S. Department of State’s Bureau of Educational and Cultural Affairs funds the Fulbright fellowship, one of the world’s most prestigious educational exchange programs. Recipients are chosen on the basis of academic or professional achievement and demonstrated leadership potential.

Dan Kramer, director of the Fulbright U.S. Student Program, was on campus April 28 to meet with students and faculty for an information session on how to be competitive in the Fulbright process.

To learn more about the Undergraduate Fellowships Office and the steps to obtain national scholarships, visit www.mtsu.edu/honors/ufo, call Clippard at 615-898-5464 or email Laura.Clippard@mtsu.edu.