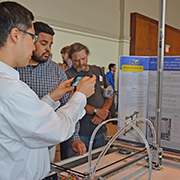 The open house was held in the Tennessee Room of the James Union Building. It was open to the public and campus community.

In addition to poster presentations with hands-on projects, student work on display will include the solar boat, Formula SAE (Society of Automotive Engineers) and lunar rover. Student awards for the 2015-16 academic year were presented.

Lei Miao, left, MTSU assistant professor in Engineering Technology’s mechatronics engineering program, shoots video of the H-bot laser printing wipe board project Zach Hunter and others were involved with during the 2015-16 academic year. They were attending the annual Engineering Technology Open House April 28 in the Tennessee Room of the James Union Building.