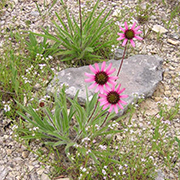 This year, others will be paying tribute to the late Hemmerly during the 39th annual festival at Cedars of Lebanon State Park near Lebanon, Tennessee, Friday and Saturday, April 29-30.

A Tennessee purple coneflower grows among the rocks in the cedar glades at Cedars of Lebanon State Park near Lebanon, Tennessee. (File photo by the State of Tennessee)

The event is free and open to the public. The park is located just off U.S. Highway 231, about 25 miles north of Murfreesboro and 6 miles south of Lebanon, Tennessee.

Noting that he was the author of four books, she said his specialty and dissertation was on the life history of the Tennessee coneflower, which was thought to have been extinct.

“Tom, Dr. Quarterman and a student found the plant,” Sadler said. “In 2015, Tom led the conversation about Dr. Quarterman at the festival, and it’s kind of sad that now we’re remembering him.”

That remembrance will occur Friday during the 7 p.m. program, which also will include presentations by members of the American Legacy Tree Project and the Tennessee Nature Conservancy.

Along with Sadler, a number of MTSU alumni — Buddy Ingram, Nia Davis, Roy and Melissa Turrentine, and Sharen Bracy — will lead sessions. Ingram is the park ranger.