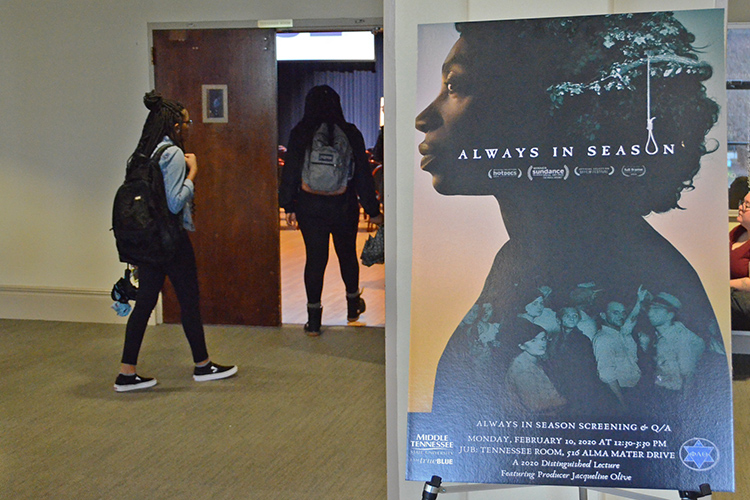 For Jacqueline Olive, director and co-producer of the documentary “Always in Season,” looking back at the history of lynching in this nation is absolutely critical in understanding our present and how best to heal and move forward.

Her 90-minute film was shown in a special MTSU screening earlier this month at the James Union Building as part of the university’s Black History Month celebration and was followed by a question-and-answer session with those who attended.

PBS will air the documentary Feb. 24 and can be viewed on Nashville Public Television. 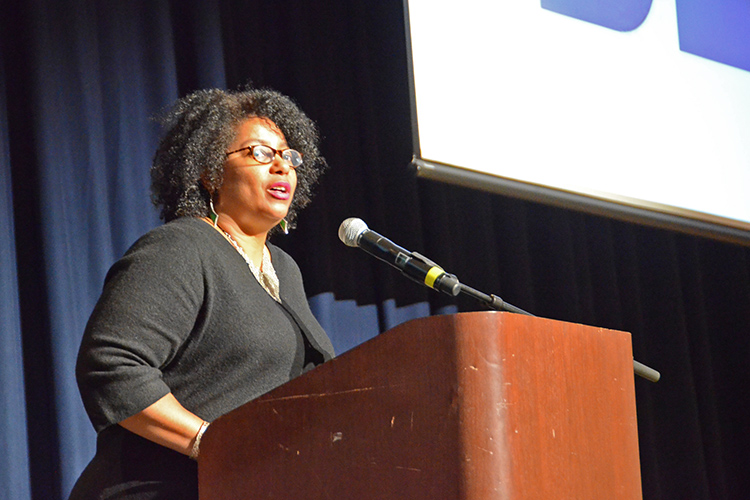 Independent filmmaker Jacqueline Olive talks about her documentary “Always in Season” before it is screened Feb. 10 in the James Union Building’s Tennessee Room. (MTSU photo by Jimmy Hart)

In an interview before the MTSU screening, Olive said that part of the impetus for making the film was a collection of photos she saw in a lynching exhibit titled “Without Sanctuary: Lynching Photography in America,” and in fact many of the haunting, graphic photos displayed in her documentary came from the same exhibit.

She noted how those photographs often showed black lynching victims surrounded by dozens, hundreds and sometimes thousands of white people and that such photos were sometimes turned into popular postcards that were eventually banned in the 1930s.

“Those images really struck me,” she said. “The faces of the victims looked like they could have been my family members, my friends, and so I wanted to better understand their stories and how they found themselves in a situation where half or more of the town turned on them in that way.”

MTSU history professor Aaron Treadwell said the purpose of the screening and Olive’s visit was to give the public “an opportunity to have nuanced conversation about lynching,” and he thanked the students in attendance “who believe black history as American history, for students who saw it not robbery to learn.” 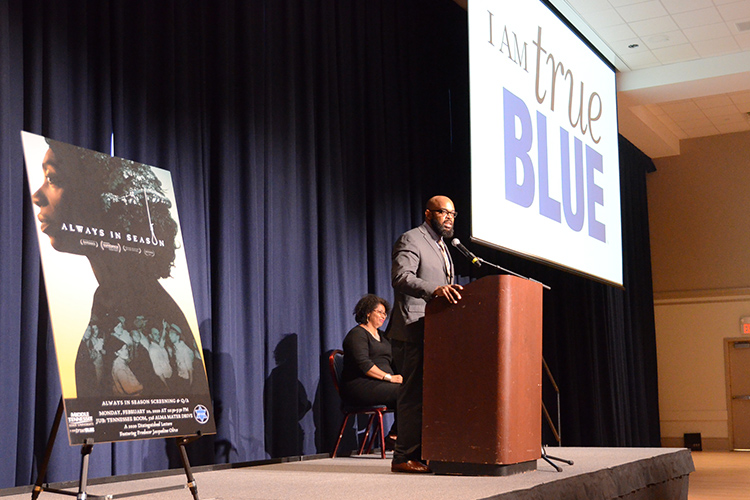 The film explores the lingering impact of more than a century of lynching African Americans and connects this form of historic racial terrorism to racial violence today. Its focus is the case of Lennon Lacy, an African American teenager who was found hanging from a swing set in Bladenboro, North Carolina, in August 2014.

A medical examiner’s report said the young man’s death was a suicide. His family, however, feared he’d been lynched, and his girlfriend told investigators that neighbors opposed their interracial relationship. An FBI investigation began four months after Lacy’s death and concluded in June 2016 that agents found “no evidence to pursue federal criminal civil-rights charges.”

Olive said she spent two years researching and developing the project, with the first six months “only looking at the victims and their stories,” she said.

“And then I started looking at the images again, and I started to realize that the spectators, they could have been my friends, my neighbors, my classmates … their faces were familiar,” she continued.

“Lynching has impacted the entire country, impacted entire communities, not just the families of the victims. They were terrorism for black families in very obvious ways. They were messages. Often the bodies were left in the black community as a message to not step out of line because this is what could happen.” 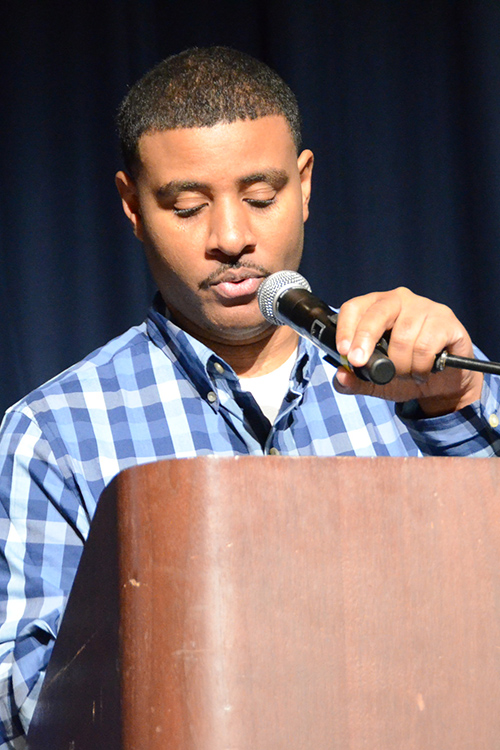 Daniel Green, director of MTSU’s Office of Intercultural and Diversity Affairs and Black History Month chair, reads a portion of a local history lesson on lynchings from MTSU graduate student John Lodl before the Feb. 10 screening of the documentary “Always in Season.” (MTSU photo by Jimmy Hart)

“But they were also impactful for white people, even those who came out to attend the lynchings. Even though they came out to cheer the violence on, they had to live with the smell of burning flesh, the images and the screams of people dying. That their neighbors and people in authority were present.

“In those quiet moments, what are those things that … these were seminal events. This level of violence impacted people in their quiet moments. And when people are encouraged not to talk about it, when they’ve decided to be in collusion, to not say who was involved and who was present, all of that energy is then bottle up. And the consequences are passed on from generation to generation when we don’t look at it, so there are so many lessons that are lost when you don’t understand this history.”

Before the screening, Daniel Green, director of MTSU’s Office of Intercultural and Diversity Affairs and Black History Month chair, read a portion of a local history lesson on lynchings from MTSU graduate student John Lodl.

Lodl’s research showed that 214 people were lynched in Tennessee between 1882 and 1930, and the National memorial for Peace and Justice in Montgomery, Alabama, recorded four lynchings that took place in Rutherford County. New research revealed that nine lynchings were recorded in Murfreesboro and Rutherford County between 1869 and 1908 — one white and nine black.

Green asked the audience to repeat the names and dates of the recorded lynchings after he read them, ending with the refrain, “We remember their names.”

“Always in Season” premiered at the Sundance Film Festival in January 2019 and won a special jury award for moral urgency.

Olive, an independent filmmaker and immersive media producer with more than a decade of experience in journalism and film, also co-directed and produced the award-winning short documentary “Black to Our Roots.” She received the Emerging Filmmakers of Color Award from the International Documentary Association and the Jonathan Logan Family Foundation and has worked on the production team of the PBS documentary series “Independent Lens.”

She spent seven years filming across America in communities where lynchings occurred. In an interview with WomenandHollywood.com, Olive said Lacy’s death “recalls the trauma of nearly 5,000 lynchings of African Americans for more than a century.”

Olive’s visit was sponsored by the university’s Department of History and the Distinguished Lecture Series.

You can watch the “Always in Season” trailer below: