Interested in biochemistry and hunting for the right college for him, Ross Sibley, his mother Pam and sister Emily flew 2,000 miles from Southern California to Nashville, Tennessee, last summer.

They planned to check out schools in Nashville and Knoxville, then discovered Middle Tennessee State University. “We stopped here, in Murfreesboro, and I fell in love with it,” Sibley, 17, a resident of Redlands, said. “It was a hidden gem, academic heaven.” 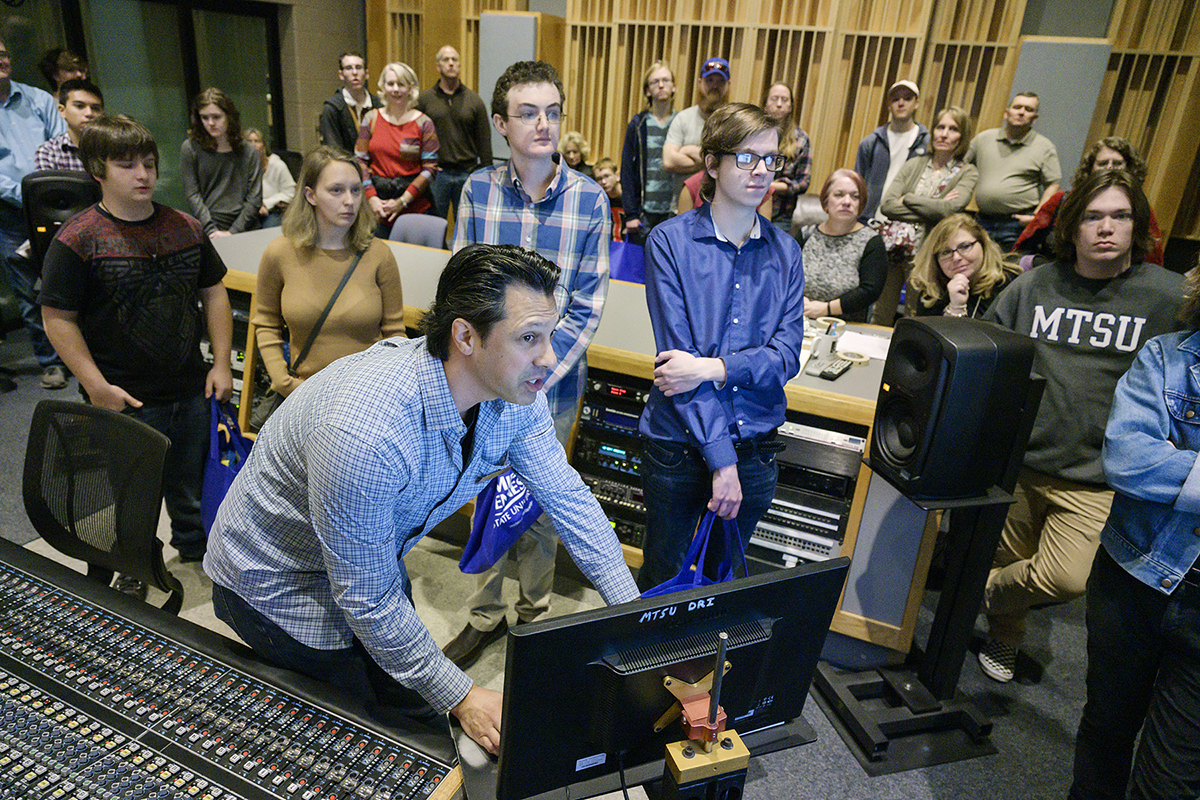 MTSU recording industry professor Matt Foglia, foreground, demonstrates to prospective students and their parents how the state-of-the-art equipment works in Studio A in the Bragg College of Media and Entertainment Monday, Feb. 17, as part of the Honors College Presidents Day Open House. Hundreds of students toured the campus and met various deans, faculty, department chairs and administrators. (MTSU photo by Andy Heidt)

Mother and son flew back for another look Monday, Feb. 17, during the daylong Honors College Presidents Day Open House, a major event for public, private and homeschool students seeking a strong academic institution. It was held in the Student Union and other campus venues.

When the Yucaipa (California) High School senior with a weighted 4.56 GPA, 34 ACT and 1510 SAT returned, he already knew he was being offered an Honors College Buchanan Fellowship (the highest MTSU scholarship awarded).

Honors College Dean John Vile and Department of Chemistry Chair Greg Van Patten had “sold” Sibley on “the big emphasis with collaboration and working with others on research. The people here were so welcoming, a college town feel,” the teenager said.

Sibley must still decide. Monday morning, he said he was considering two or three schools. Before leaving campus to fly back home, he said it was MTSU and one other school.

“It’s definitely a strong option for me,” he said of the MTSU option. “If I’m here, it’s meant to be.” 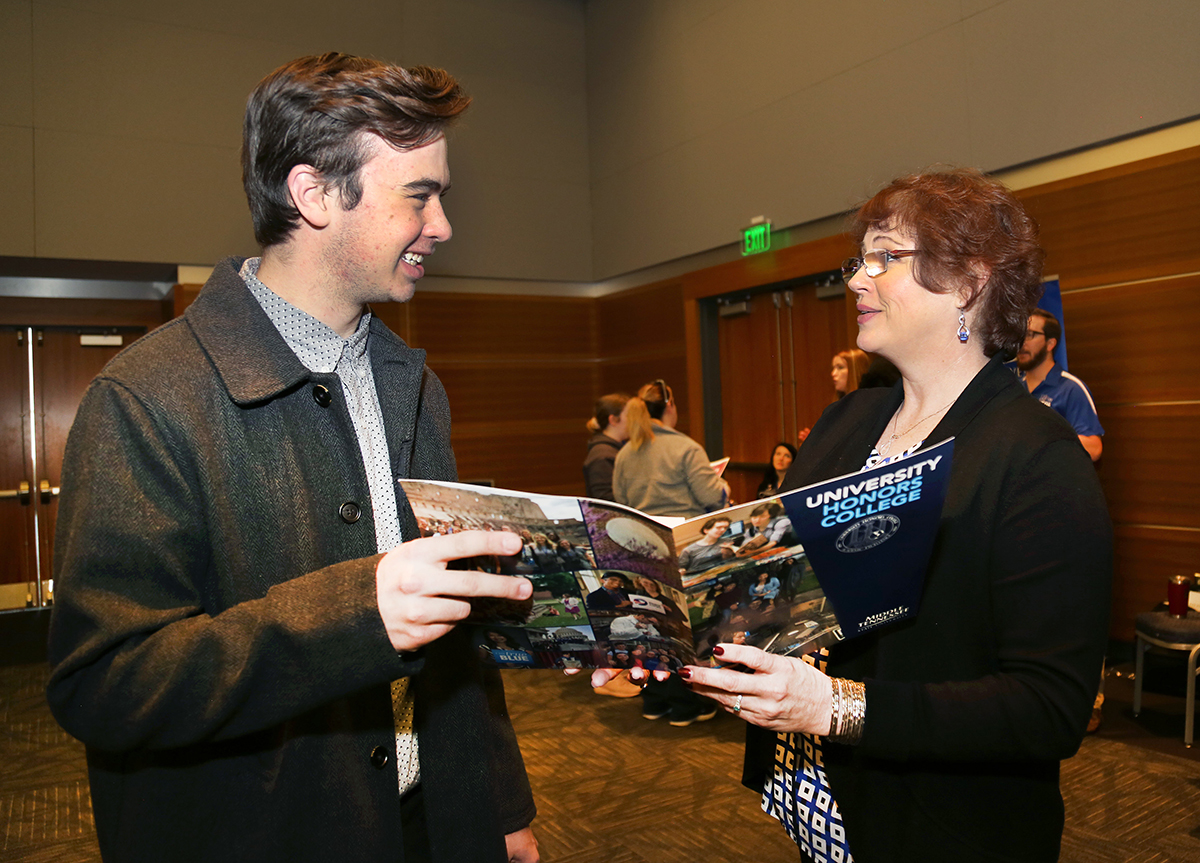 Quite a day, turnout for open house

Vile said the early morning Buchanan Scholar breakfast and all-day open house “went quite well. We had a great crowd (nearly 250 prospective students, plus parents), the weather was almost perfect and President (Sidney A.) McPhee emphasized how MTSU was increasingly recruiting more students with high GPAs and test scores and how this contributed to our recognition by The Princeton Review.”

Junior Ella Morin, double major in biology and Spanish, delivered a compelling message with a NASCAR theme and high praise for the Honors College staff and genetics class research mentor David Nelson — “part of my loyal pit crew,” she said.

“Regardless of your passion, the Honors College will elevate your experience and ease your ride along the raceway of life,” she added. “And as you search for your future pit crew, we hope you choose True Blue.”

Vile said one of the highlights of the day was a quiz on American presidents. Luke Marlin, of Christiana, Tennessee, who attends Middle Tennessee Christian School, turned in the best exam.

The Honors dean thanked all of the colleges within the university for their participation, noting that Beverly Keel, who is the new College of Media and Entertainment dean, met individually with a potential Buchanan Scholar who is interested in journalism. 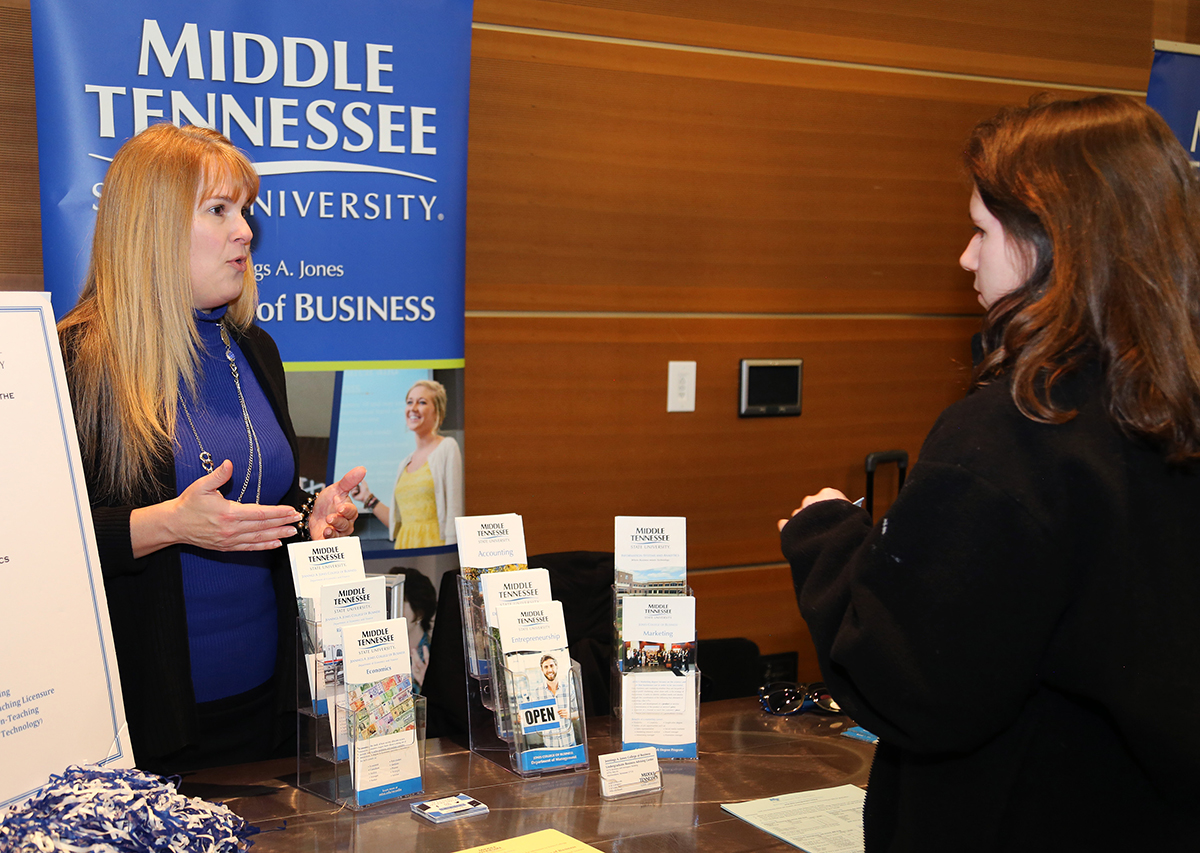