MTSU is new national model for.. 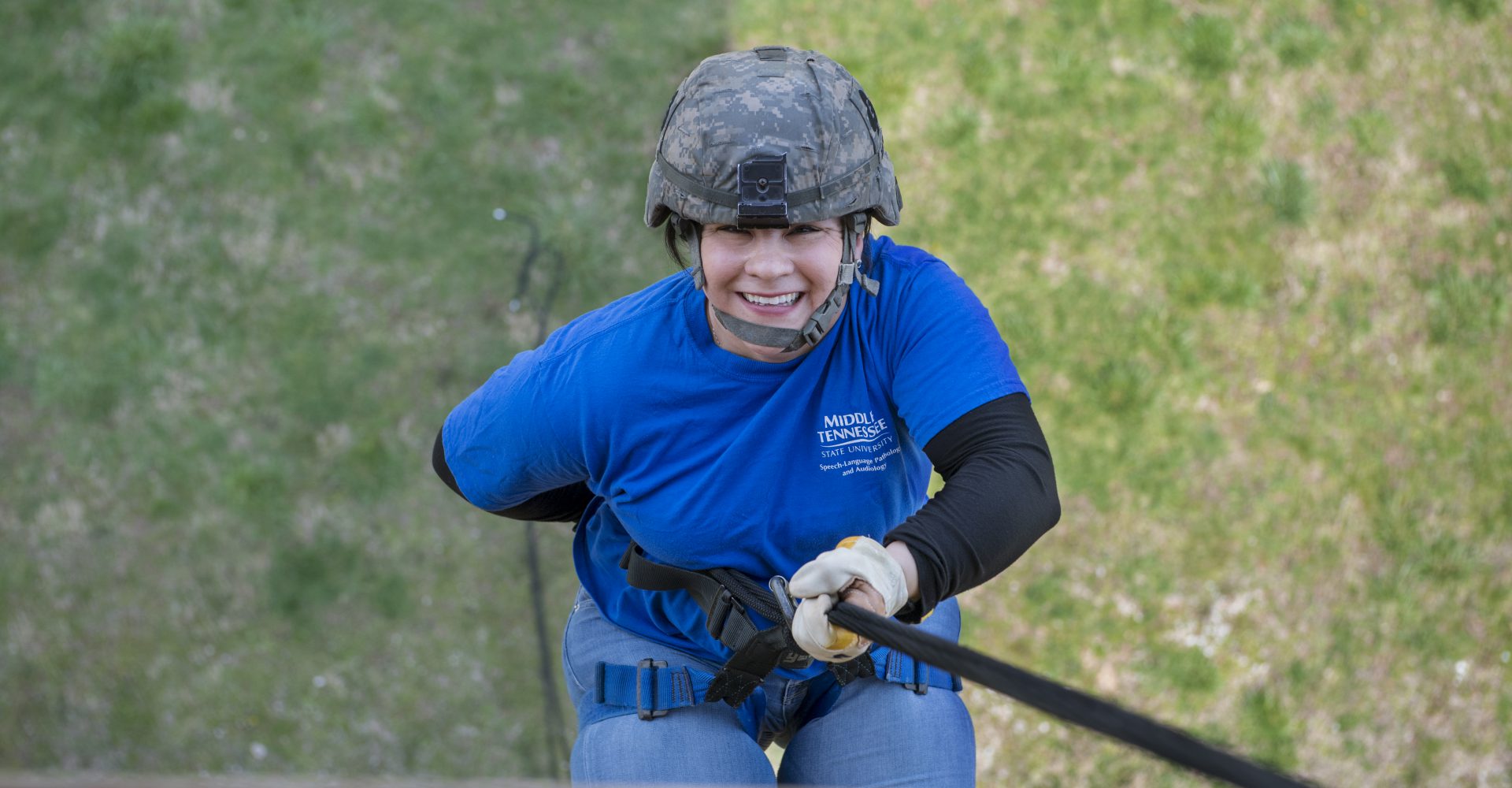 When Amanda Hallam’s military transport was landing at Kandahar Airfield in Afghanistan, her thoughts weren’t on the beautiful snow-covered Hindi Kush mountains to the north or the impressively vast Registan Desert to the south. She wasn’t even thinking about the potential dangers of landing in a country that’s an active theater of war. No, now retired from the U.S. Army as a sergeant, Hallam was thinking about Gabriel, her then-infant son, who was living with her parents in Ocala, Florida, some 4,500 miles away.

“When I left, my son wasn’t even 2 years old,” said Hallam, a single mother. “I left him with my mom and dad, and they watched him for me until I could get back. It was hard.”

Amanda Hallam and her son Gabriel

Hallam traveled from Kandahar by Chinook helicopter—the military helicopter that resembles a wide school bus suspended from two huge rotors—to the U.S. military FOB Wolverine where she would serve in an air reconnaissance battalion. She volunteered for the deployment to the war zone as part of an agreement that would eventually allow her to be stationed in Savannah, Georgia, about 250 miles away from Ocala.

She spent the better part of the next year at FOB Wolverine.

“I had a very fortunate deployment in that I wasn’t always under an imminent threat of something happening,” Hallam said. “I was there for nine months. Sometimes I worked gate duty as a guard, but most of the time it was working promotions or promotion boards. I was an HR (human resources) soldier and did a lot of paperwork.” Hallam, now an MTSU student, said the most challenging part of her deployment came in the final two weeks before returning stateside.

“I stayed occupied the whole time I was there—I was really busy, and that helped,” she said. “But that last two weeks of sitting in Kandahar waiting to come home was the toughest for me because we weren’t doing anything and my mind was stagnant. All I could think about was my son and being at home with him.”

There was great fanfare when she returned—and an unwelcome surprise that would take more than a year to heal.

“They had a big ceremony in one of the hangars, and I saw my son when I was standing in formation. I could see him dancing around and was so excited because there was a lot of music playing,” Hallam said.

“My son was very young, and even though I Skyped with him a lot while I was in Afghanistan, he didn’t understand that I was Mommy. It was like a stranger was picking him up. He cried and cried and ran to my mother—that was tough.”

But home they went, to finally begin rebuilding their lives together as mother and son.

“It was odd for the first few months. It was like living in a house with a stranger; my son was weird with me,” Hallam said. “Now my son is on me like glue. He’s a momma’s boy and loves me very much. They say babies are the most resilient when it comes to deployment, but I don’t believe it. It took at least a year for us to get back to the normal.”

“When I got out of the military, I was married. My then-spouse decided to go into MTSU’s Aerospace program,” she said. The marriage, however, ended “two weeks before the semester started. I was scared. I wish I could have seen how well I would do at MTSU; it would have calmed my nerves. But at the time I was worried about financially how I was going to do this.”

As a single mom hoping to earn an undergraduate degree, answers were hard to come by for Hallam. In many ways, Hallam was lost and understandably confused. Her marriage was over, she no longer had her parents caring for Gabriel on a daily basis, and her future was unclear. But she liked Murfreesboro as a community, she said, and was determined to stay if she could.“I can see now that a big part of my identity was lost, too,” Hallam said. “When you’re in the military, there’s a cohesion with your unit. As you transition out of the military, you’re completely displaced from a situation you know. It’s hard, and it can get really lonely sometimes. But becoming a hermit and being too much into yourself isn’t helpful. I was supposed to be getting mental health treatment, but I didn’t have anybody who could watch my son. I went to a church group where some nice ladies would watch the children.”

“Sometimes you’ve just got to stick your neck out— people want to help, that’s human nature. For me, it was swallowing my pride and going out there and getting the help I needed.”

After “sticking her neck out,” she found a solution to another big problem, too. Hallam soon discovered a provision in her military contract that the government would supplement the G.I. Bill, which pays for military personnel, veterans and, in some cases, a family member, to go to college.

“It’s called a ‘college-fund kicker,’ but there’s a catch,” she said. “It’s an incentive, but the catch is that you have to complete your service before you can receive the benefit, and it pays an extra $850 per month on top of the G.I. Bill.”

The complications she experienced adjusting to civilian life as a single mother while trying to fund her undergraduate studies as a nontraditional student led her to a rich on-campus resource at MTSU that would eventually be renamed the Charlie and Hazel Daniels Veterans and Military Family Center. This incredible resource helped Hallam overcome the challenges of transitioning into her new life as a military veteran, a nontraditional college student, and a single mom. This was a powerful game-changer for her, making it practical for her to pursue an undergraduate degree in Speech–Language Pathology and Audiology. Hallam saw firsthand the tremendous value in helping new veterans transition from military life to life as a student. So much so, in fact, that she began working at MTSU’s military center, renamed in 2016 after the country music legend Charlie Daniels and his wife, who live in nearby Mount Juliet.

“I work about 15 hours per week assisting active duty personnel, veterans, and their families with vocation questions or directing them to rehabilitation help,” Hallam said. “Outside of my job, I also go to Fort Campbell quite often and talk to people getting ready to leave the service about MTSU. They always ask me about the military center, which most schools don’t have. I don’t think I’m selling it, but I’m selling it.”

“As a single mom, I love MTSU. It’s so veteran-friendly; that’s one of the reasons I stayed in Murfreesboro—there are a lot of veterans here and a lot of veteran organizations.”

Hallam, graduating in the summer of 2017, is considering pursuing a master’s degree online in vocational rehabilitation.

Her success is indicative of the goal of the Daniels Center and MTSU’s outreach to veterans: to transform soldiers, airmen, sailors, and all other men and women who have served the United States into another staple of a strong nation: college graduates.