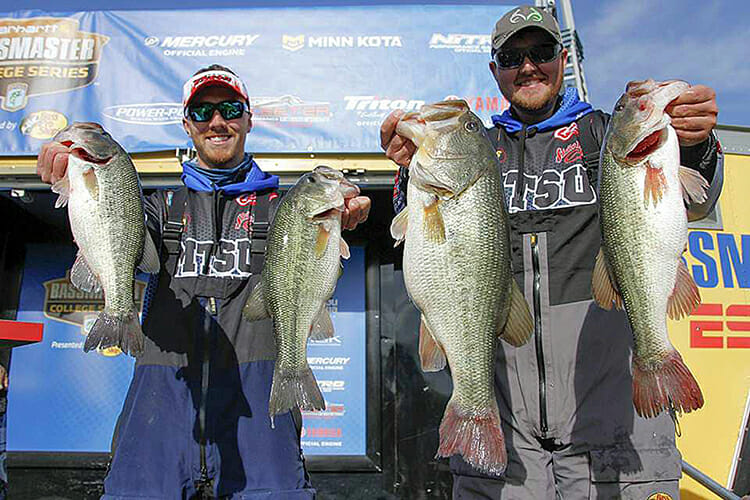 FLORENCE, Ala. — Two members of the MTSU Fishing Club will advance to the national collegiate bass fishing championship after securing a top-10 finish in a regional tournament.

Their final point total for the four-day event was 490.60, fewer than 10 points behind the first-place team from Adrian College in Michigan.

The top 38 teams will move on to compete in the national tournament, which is slated for July 19-21 on Lake Tenkiller in Cherokee and Sequoyah counties of Oklahoma.

MTSU students Mekiah Jack, left, and Matthew Cross hold their April 19 catches in the Carhartt Bassmaster College Series Southern Tour on Pickwick Lake in Florence, Ala. The bass at center right, in Cross’ right hand, is the 8-pound, 2-ounce largemouth that won the Big Bass Award for the MTSU team. (Photo submitted)

There are two more Southern Tour collegiate events on the schedule before the national contest: one is on Lake Cherokee in Jefferson City, Tennessee, May 10-12, and the other is on Clear Lake in Lakeport, California, May 23-25.

Jack also was on the team that placed 19th out of 138 in the 2017 YETI FLW College Fishing National Championship on Wheeler Lake in Florence, Alabama. He and alumnus Austin Wyatt caught nine fish weighing a total of 21.3 pounds over their two-day fishing stint.

The Blue Raider team was formed in 2008. Members use their own boats and equipment, and most began fishing when they were children.