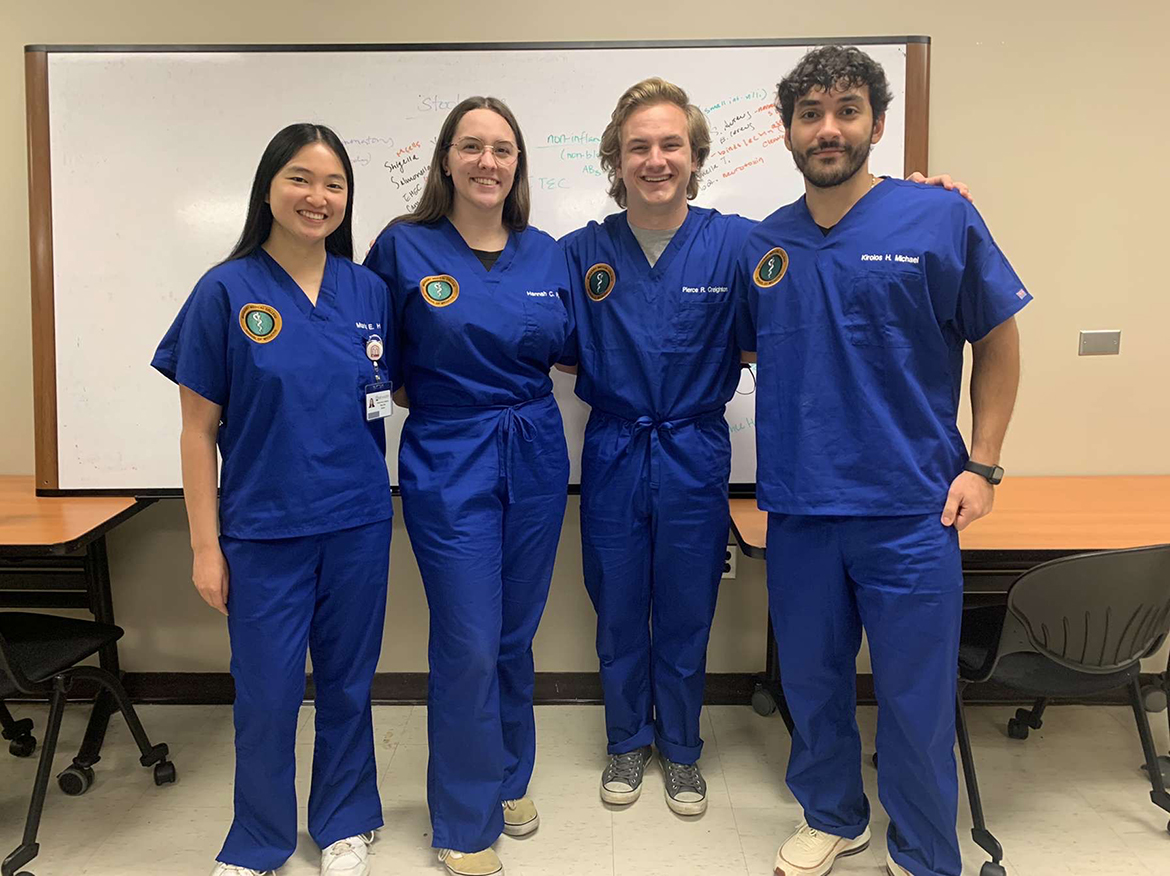 As a Dec. 1 application deadline looms for the next group of budding medical school students, the first four MTSU undergraduates have successfully advanced in a special partnership with Meharry Medical College School of Medicine in Nashville, Tennessee.

“We have made it to medical school,” an exuberant Maria Hite of La Vergne, Tennessee, said of herself and classmates Claire Ritter of Nashville, Tennessee; Pierce Creighton of Lascassas, Tennessee; and Kirolos Michael of Brentwood, Tennessee.

It’s all part of the Medical School Early Acceptance Program, or MSEAP, a collaboration between Middle Tennessee State University’s College of Basic and Applied Sciences and Meharry.

“These students will be part of the solution to an ongoing health dilemma in Tennessee: caring for those whose health care options may be scarce or inadequate,” said Dr. James E.K. Hildreth, president and CEO of Meharry Medical College.

“The opportunities this MTSU-Meharry partnership create for both this cohort of health care students and eventually for those in remote and underserved parts of the state will benefit Tennesseans who otherwise may not have access to health care,” he added. “We’re delighted with the first cohort of students from MTSU and look forward to this continuing partnership.”

In addition to Hite, Ritter, Creighton and Michael, four students are in their third year of the program at MTSU. Eight are in their second year and four in their first, for a total of 20 current program participants,

The program was announced in 2018. Hite, Ritter, Creighton and Michael were in the first freshman class.

The deadline — and what you need to know

The program is limited to incoming freshmen from Tennessee, and MTSU officials urge applicants to apply by Dec. 1 for consideration for the fall 2023 semester. Visit www.mtsu.edu/cbas/MSEAP.php to learn more.

Basic and Applied Sciences Dean Greg Van Patten said the program “attracts highly talented and compassionate students who want to make a difference for people in the state by making top-notch health care accessible to everybody.

“It’s a great program that will benefit the people of Tennessee, but it’s also a tremendous opportunity for these top students,” he continued. “The program accelerates their pathway to become doctors and also provides a hefty scholarship for all seven years they are in college and medical school. It’s truly a win-win for academically talented students who want to become doctors.”

Eric Miller, advising manager in the College of Basic and Applied Sciences, said he urges “anyone interested in making it easier for their fellow Tennesseans to receive medical care to apply before Dec. 1.”

Miller added that scores for anyone who takes the ACT in December “will be considered, too, as long as their MTSU and Meharry applications are received by Dec. 1.”

Applicants are required to have at least a 3.5 GPA and a minimum 28 ACT score to be considered for the program.

A three-year residency in primary care in a rural or underserved area of Tennessee, along with a two-year post-residency commitment, is also required of MSEAP participants. Once they’re accepted into MSEAP, students receive conditional acceptance to Meharry’s School of Medicine.

Hite said finishing her courses at MTSU “felt unreal. In some ways, it is still hard to believe that I am done with my undergraduate studies. I was excited to be finished and move on to medical school.

“However, it was also bittersweet. I loved my time at MTSU. It became my home and comfort zone, which is also why I knew it was time. It was time to once again step out of my comfort zone, build on those experiences and continue to grow. I am looking forward to coming back to MTSU in May to officially walk across the stage and graduate.”

Hite said what the group has achieved already “is a huge accomplishment, but we still have a long journey ahead: four years of medical school, licensing exams, years of residency, and potentially fellowships. It’s what we signed up for, but that doesn’t make it any less daunting.”

For Hite and the others, the experience “has been both exciting and challenging. We are given a large volume of material to learn in a short amount of time, but that was expected.

“Meharry creates a deep sense of community, and it can be felt from my fellow classmates and professors to all across its campus,” she added.

“The transition to medical school was easier knowing that I already had friends that I could study with and rely on for support,” Hite added. “In addition to taking interesting courses and meeting new people, I have had several opportunities to explore medicine further. Every week, we get to work with standardized patients, actors that allow us to practice clinical history-taking skills and physical exams. My classmates and I also have opportunities to volunteer at Meharry’s Salt Wagon Clinic, which provides free health care for the community and is student-led.”

Hite said she tries to take her education one step at a time.

“My three years at MTSU went by so fast, and I have heard that it is the same with medical school,” she said. “We will help improve access to health care by caring for medically underserved communities. This mission helps keep me focused and motivated, especially on the difficult days.

“The program has given us so many opportunities. Now it’s up to us to continue to put in the work and become the best physicians we can be.”

Earlier this year, Michael, an immigrant from Egypt, became the first recipient of the Drs. David and Yolando Chatman Scholarship, announced by Murfreesboro Medical Clinic and SurgiCenter, in conjunction with the MMC Foundation. The foundation and MMC Diversity Committed developed a scholarship for local students who are advancing to medical school.

Each new group of students performs a Habitat for Humanity day of service during their two-week summer bridge program — the first week at MTSU and second at Meharry.