The glass tank — 25.6 inches wide and 59 inches long — holds 165 gallons of saltwater weighing more than 1,400 pounds not including the weight of the tank. 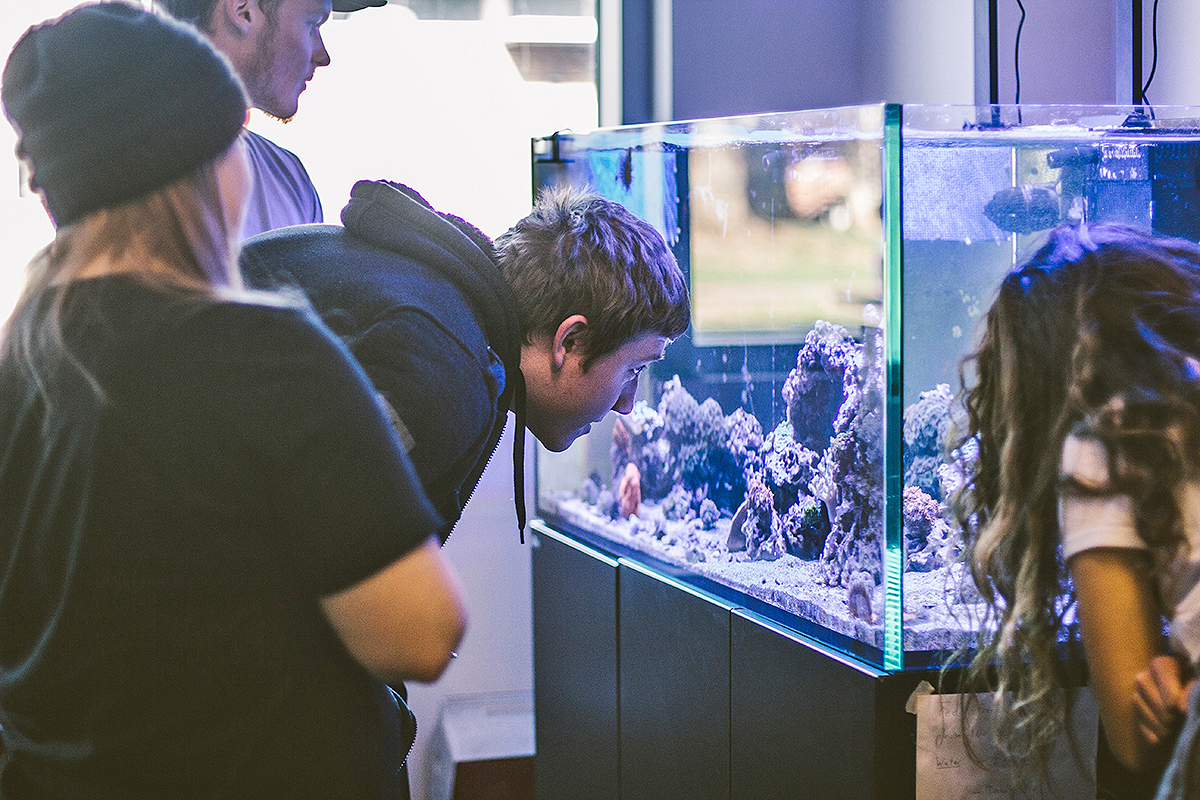 Along with other MTSU students, junior biology major Tyler Suttman, center, of Apison, Tenn., near Ooltewah and Chattanooga, peers into the state-of-the-art aquarium in a Science Building teaching lab during his invertebrate zoology class. His biology concentrations are organismal biology and ecology. (Submitted photo by Brooke Fitzpatrick)

Students taking invertebrate zoology and marine biology classes in an MTSU Science Building teaching laboratory are recipients of the inland aquatic education though they’re hundreds of miles from the Atlantic Ocean and Gulf of Mexico.

A number of corals, sea anemone, sea urchins, crabs, rocks, echinoderms, marine snails, flatworms, polychaetes, cuttlefish and hummingbird or bobtail squid are among the marine life found in the tank.

The tank and its contents are the brainchild of Jeremy Smith, 27, an undergraduate teaching assistant who helped the biology department secure everything for about $5,000.

“Jeremy is the driver of the tank,” said Steve Howard, a biology professor teaching the invertebrate zoology class. “He was one of my undergraduate teaching assistants in this class a few years back, and he suggested to me that it would be great if our students could see live specimens.”

At home in Smyrna, Tennessee, earlier this decade, Smith started breeding fish with a fresh-water tank, then converted to saltwater eight years ago. He incorporated corals, which became a passion. In 2017, he convinced Howard, who, in turn convinced and the biology department to make the investment.

“This tank adds a lot to the class,” said Howard, who has 16 students in his spring semester course. “Preserved specimens have their place in a biology lab, but observing living animals is the gold standard.” 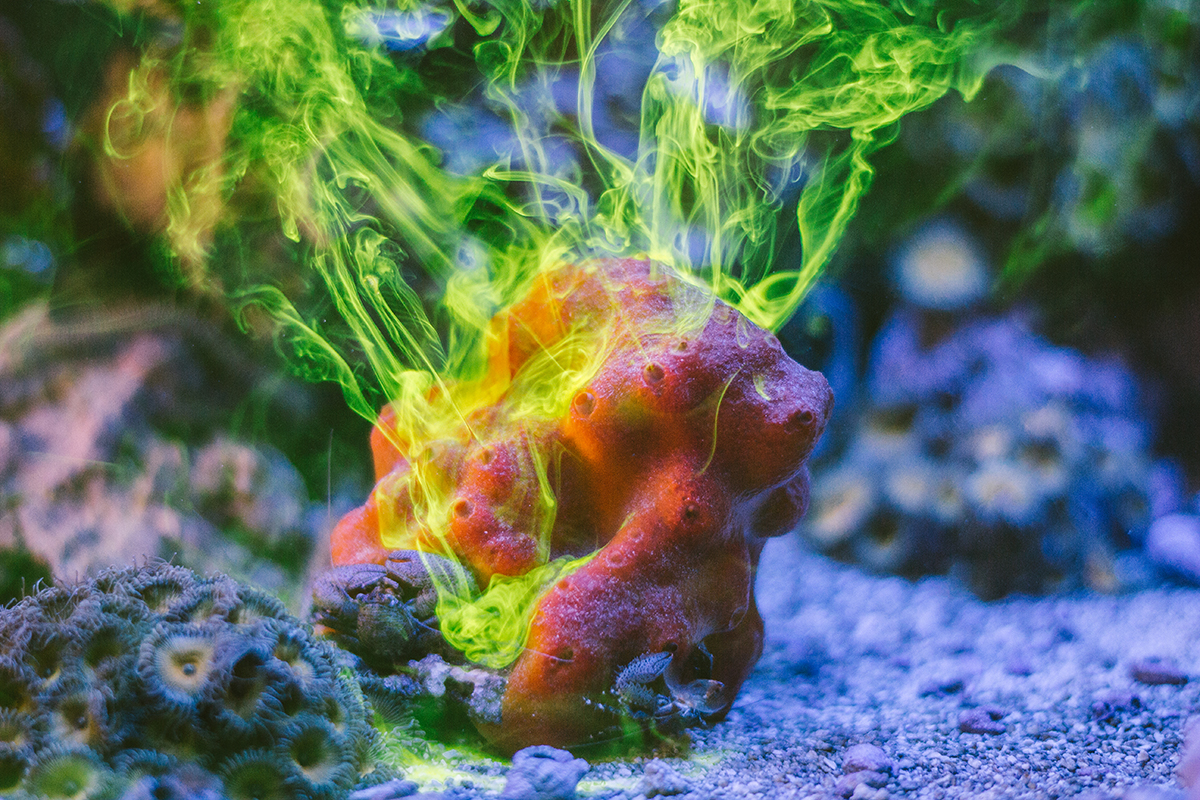 A nontoxic fluorescent dye revealed how a sponge moves water through its body — one of dozens of intriguing sea life students can study in the large marine aquarium in the MTSU Science Building teaching lab. (Submitted photo by Brooke Fitzpatrick)

Professor Jeff Leblond said the tank “is a great tool to show the (marine biology) students live marine organisms living together. It is a nice complement to the lab exercises, where we dissect preserved animals.” He is utilizing the tank for the first time with the 20 undergraduate students taking the course.

The students, some of whom are taking both classes this semester, and others are getting to experience the educational value of the tank’s aquatic life.

Angela Maxwell, 21, a junior biology major from Memphis, Tennessee, said she “discovers something new in the tank almost every week. It’s pretty cool and challenging. You have to be mindful of small details.” Her career plans are with zoology, but “after taking this class, I’m debating now and thinking about marine biology.”

McKinley Bible, 27, a senior biology major from Dandridge, Tennessee, said having the tank is “a major insight into how a marine ecosystem functions at the smaller levels. Without the tank, you wouldn’t be able to realize just how important those smaller species are. This increases the interest into marine ecosystems and just how complex they are further prompting new ideas about careers in the marine biology field.”

For Bible, the lone drawback is that “we live in a state that does not border an ocean.” 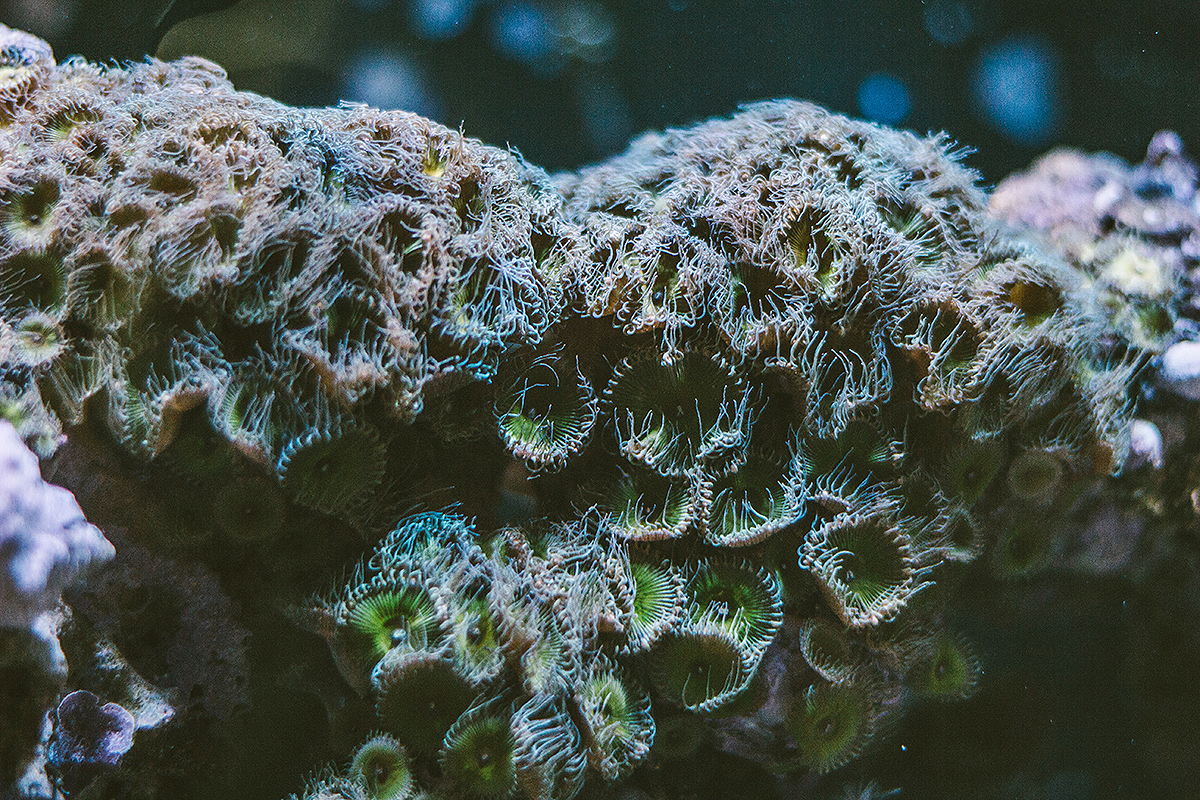 A soft coral with varying colors flourishes in the marine aquarium in the MTSU Science Building teaching lab. (Submitted photo by Brooke Fitzpatrick)

To which Daniel Pugh, 25, a junior biology major from Lewisburg, Tennessee, said the tank “has demonstrated that you don’t really have to live near the beach to be a marine biologist.”

“The tank has given better context to the material covered in class, and we have used it in a number of lab exercises; it is a miniature marine system,” Pugh said.

“In one exercise, we took samples of the sand from the bottom of the tank and examined them under a dissecting scope. The sand contained polychaete (bristle) worms and innumerable and various microscopic organisms. It was remarkable that within the sand of the tank there was a separate microcosm.”

Pugh said the aquaculture hobby is quite a lucrative industry — that cultivated coral fragments can sell for a high price. “The tank also has the capacity to inspire students to pursue the study of freshwater, aquatic environments,” he added.

Including marine biology and invertebrate zoology, MTSU has more than 300 combined undergraduate and graduate programs. Biology is one of 11 College of Basic and Applied Sciences departments. 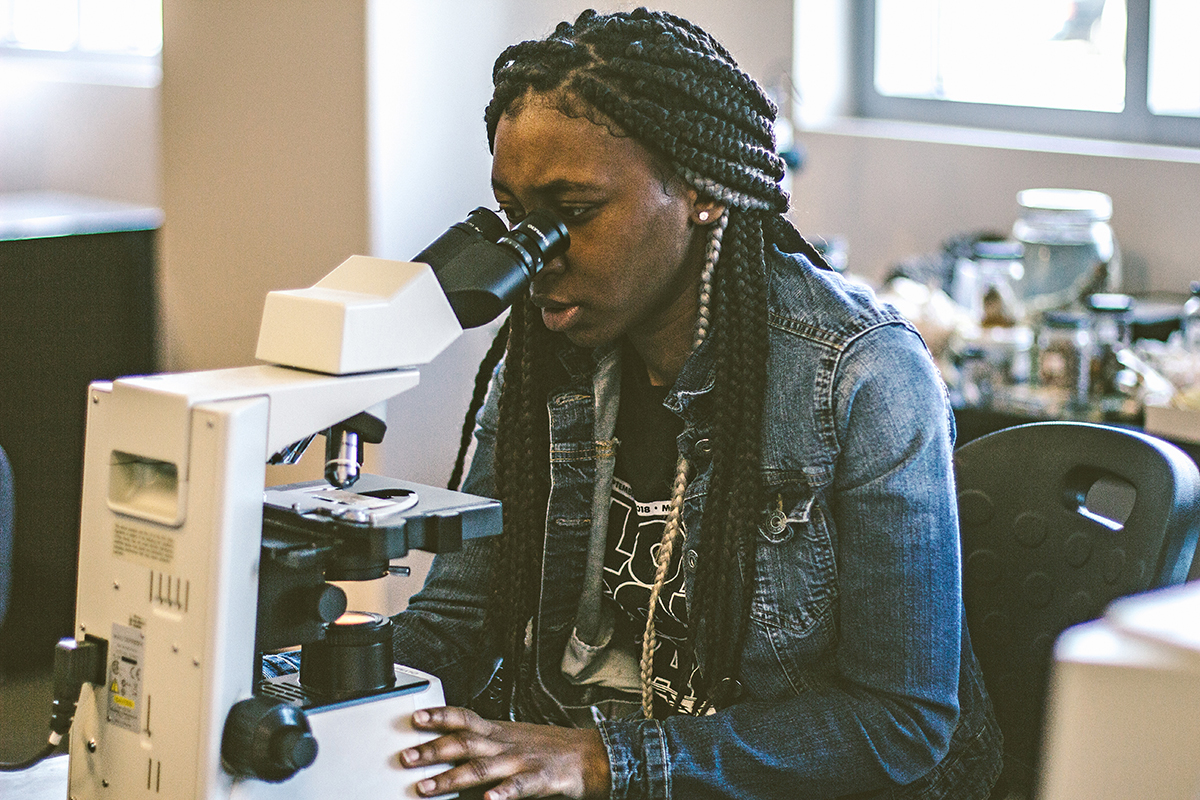 Angela Maxwell, 21, an MTSU junior biology major from Memphis, Tenn., studies marine life through a microscope in a Science Building teaching lab. She said she “discovers something new almost every week.” (Submitted photo by Brooke Fitzpatrick)