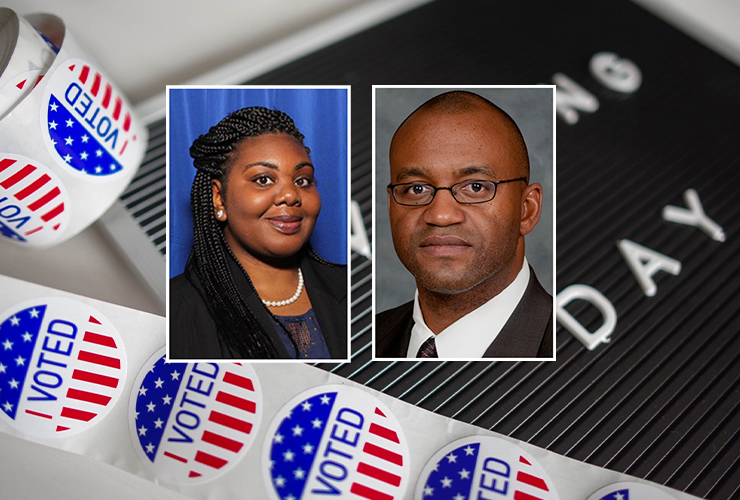 As a part of the 2020 Black History Month celebration, MTSU students and faculty will have the opportunity to learn how to fight for their right to vote.

The university will host its first “Election Protection and Voting Rights in the 2020 Election” event beginning at 6 p.m. Tuesday, Feb. 11, in Room S118 of the Business and Aerospace Building, 1642 MTSU Blvd. The event is free and open to the public. Off-campus visitors can find a parking map at www.mtsu.edu/parking/2019ParkingMap.pdf.

Guest speaker and voting rights organizer Armani Eady will join MTSU assistant political science professor Sekou Franklin for the discussion. The goal is to educate attendees on how to identify and strategically overcome tactics of voter suppression as Americans prepare to cast their ballots in a presidential election year.

“Voting rights is a constitutional protection, which at times has not been enforced,” Franklin said. “Further, Congress has passed a national voting rights bill (officially called the Voting Rights Act of 1965) and it has been reauthorized multiple times. Yet, sustained attacks on voting rights still continue.”

This event also will prepare students on how to take an active role in monitoring election irregularities, Franklin said, along with developing infrastructures that can actively respond to voter suppression and related problems in the upcoming 2020 election.

“African Americans and the Vote” is the election-year theme for MTSU’s Black History Month activities characterizing a number of events celebrating hard-fought battles in the quest for African American enfranchisement.

Eady has been a dedicated advocate for equality, diversity, and most importantly voting rights and education since her first year of undergraduate at Loyola University New Orleans. During her freshman year of college in 2014, she founded the university’s first multicultural organization for collegiate women of color, entitled the L.O.V.E Chapter of Loyola University.

Additionally, Eady had the opportunity to intern in several political offices across the country, including the Office of the Public Advocate of New York, and most recently, the Attorney General for the District of Columbia.

Since graduating in 2018 with her bachelor’s degree in political science from Loyola, Eady continues to follow her passion for politics. She currently serves as an Election Protection Organizing Fellow at the Lawyers’ Committee for Civil Rights Under Law.

Franklin, meanwhile, has been teaching at MTSU for 17 years, specializing in topics such as American and urban politics, social movements, along with various racial and ethnic issues. Along with his daily presence in the classroom, Franklin is active within various social justice groups in the region.

Some of his affiliations include the Tennessee State Conference of NAACP, Operation W.A.V.E., Tennessee Alliance for Progress (TAP), and others. He also currently serves as the 40th president of the National Conference of Black Political Scientists.

Franklin believes that once voting is seen as a necessity by all members within a community, the more likely participation levels will rise. He hopes students in particular will take advantage of this opportunity to engage on such an important topic.

“It is important for students to identify the barriers to voting that are both implicit and explicit, as well as intentional and face-neutral,” he said.

For more information on the event, contact Franklin at 615-904-8232 or sekou.franklin@mtsu.edu.