Director-producer of award-winning ‘Always in Seas...

Director-producer of award-winning ‘Always in Season’ speaks at MTSU

A special guest at MTSU will help the community track racial violence through American history Monday, Feb. 10, when she screens “Always in Season,” an award-winning documentary focusing on lynching, its horrific roots and its presence today. 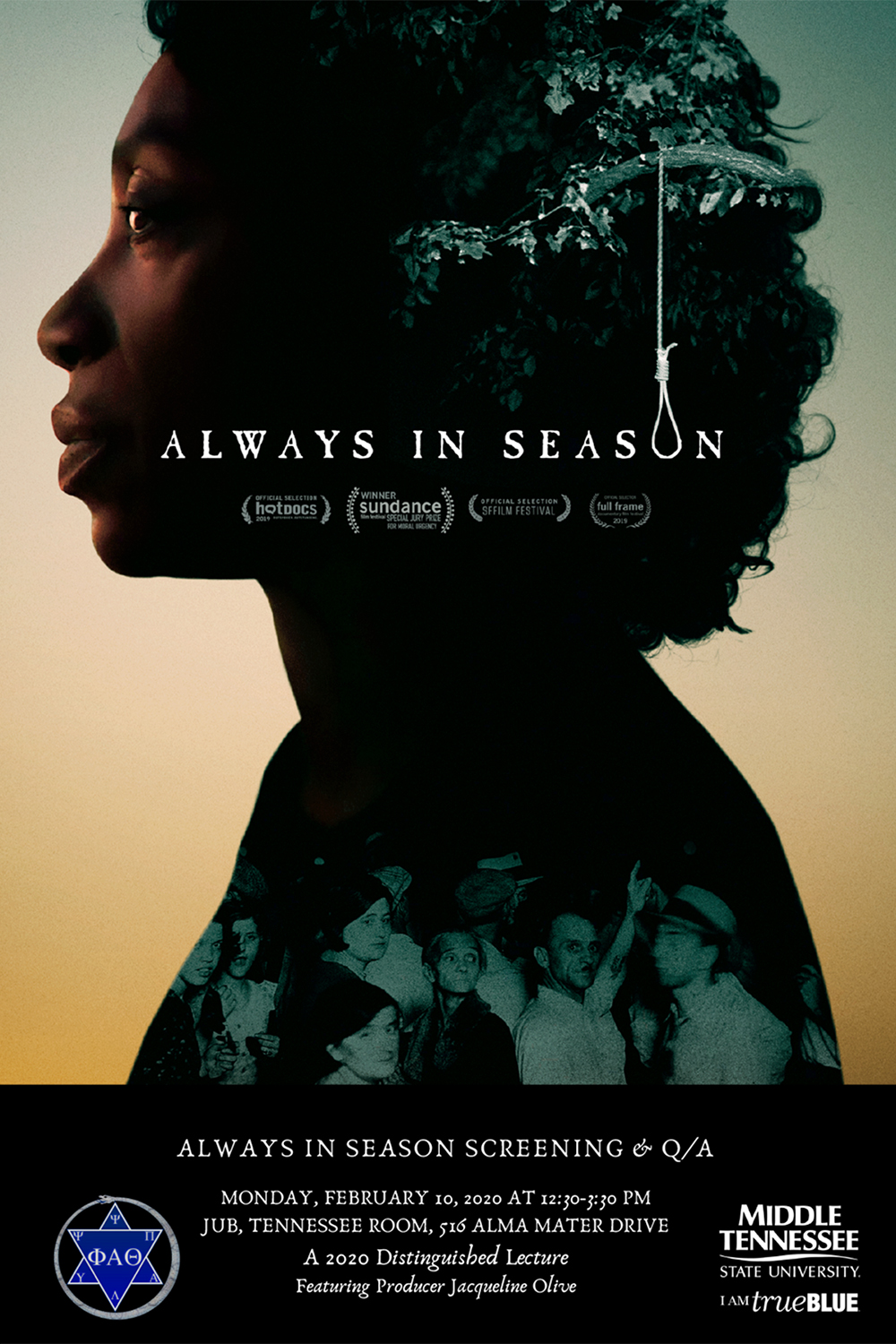 Jacqueline Olive, director and co-producer of “Always in Season,” will present the 90-minute film, followed by a question-and-answer session, beginning at 12:30 p.m. Feb. 10 in the Tennessee Ballroom of MTSU’s James Union Building, 516 Alma Mater Drive.

A campus parking map is available at http://bit.ly/MTSUParkingMap. Off-campus visitors can get a one-day permit at www.mtsu.edu/parking/visit.php. A handicapped-accessible entrance is available at back of the James Union Building.

The film explores the lingering impact of more than a century of lynching African Americans and connects this form of historic racial terrorism to racial violence today. Its focus is the case of Lennon Lacy, an African American teenager who was found hanging from a swingset in Bladenboro, North Carolina, in August 2014.

A medical examiner’s report said the young man’s death was a suicide. His family, however, feared he’d been lynched, and his girlfriend told investigators that neighbors opposed their interracial relationship. An FBI investigation began four months after Lacy’s death and concluded in June 2016 that agents found “no evidence to pursue federal criminal civil-rights charges.”

“Always in Season” premiered at the Sundance Film Festival in January 2019 and won a special jury award for moral urgency. The 90-minute documentary also has aired on PBS.

You can watch the “Always in Season” trailer above.

Olive, an independent filmmaker and immersive media producer with more than a decade of experience in journalism and film, also co-directed and produced the award-winning short documentary “Black to Our Roots.” She received the Emerging Filmmakers of Color Award from the International Documentary Association and the Jonathan Logan Family Foundation and has worked on the production team of the PBS documentary series “Independent Lens.”

She spent seven years filming across America in communities where lynchings occurred. In an interview with WomenandHollywood.com, Olive said Lacy’s death “recalls the trauma of nearly 5,000 lynchings of African Americans for more than a century.”

“There are many parallels to historic lynching that were very familiar as I looked into Lennon’s case,” she told the website. “The depth of the loss for his family and the community that nurtured him has been intensified by the historical context of injury to black bodies.”

Olive’s visit, part of MTSU’s 2020 Black History Month celebration, is sponsored by the university’s Department of History and the Distinguished Lecture Series. Other sponsors include the MTSU Department of English, Holocaust Studies Program and the Virginia Peck Fund.