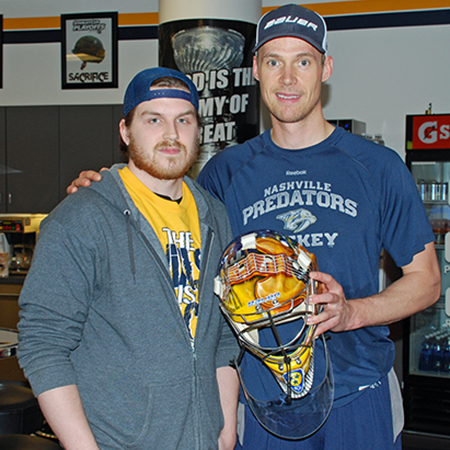 Although Scott Sulfridge’s favorite team failed to make the Stanley Cup playoffs, he has more reason than most fans to be excited.

The MTSU senior’s favorite sport gave his budding art career a boost when Nashville Predators fans picked his creation as the winner of this season’s “Design the Mask” contest.

“The design was purely based on the new jerseys that Nashville acquired a couple of years ago,” said Sulfridge.

The mask mimics those jerseys’ vibrant gold color. Sulfridge emblazoned a guitar neck and strings across the top of the mask and piano keys around the bottom edge to symbolize Nashville’s music industry as well as the city skyline.

The guitar pick on the mask includes the three stars from the Tennessee state flag.

Nashville goalie Pekka Rinne wore the mask during the morning skate and warm-up practice prior to the Preds’ thrilling 4-3 March 30 overtime victory over the Washington Capitals on home ice at Bridgestone Arena.

Sulfridge attended the game with three guests and went to the Predators’ locker room after the game to meet Rinne and get autographs. He also attended a closed-door morning team skate practice.

The art major’s love of hockey began with his father, a Buffalo Sabres fan, who took the younger Sulfridge to see the Nashville Knights, a minor league team that played before the National Hockey League located a franchise in the Music City.

“My uncle deepened my appreciation of hockey, too, as the 97-98 season started,” said Sulfridge. “What’s funny about that is he’s not even American or Canadian. He’s from Australia!”

Fans submitted designs for the mask through the Internet, an app or in person at AT&T stores in January. Predators officials chose the three finalists from more than 150 entries, and the finalists were put to a fan vote via the Web.

Sulfridge’s winning design was forwarded to NHL headquarters for approval and then to Dave Gunnarsson, a Swedish artist who has been painting goalie masks for more than 20 years.

Planning to graduate with a bachelor’s degree of fine arts this December, Sulfridge credits associate professor Michael Baggarly with helping to make him a better artist.

In the meantime, Sulfridge and his partner, James Mangrum, are creating a different type of mask through their fledgling business, Uncanny Valley Productions.

“We’re hoping to branch out into a little more diverse and complex forms of mask making, but right now we do vacuum-form styrene plastic masks,” Sulfridge said. “And we specialize in vintage and retro-style monsters like vampires, mummies, things like that.”

Sulfridge’s favorite mask, however, is one he did not make from scratch. It’s the one that bears his design and Rinne’s autograph. It’s a mask he’ll keep for the rest of his life.

This photo shows a close-up of the mask designed by MTSU student Scott Sulfridge and worn by Nashville Predators’ goalie Pekka Rinne.